After a brief initial pause, investors continued to focus on the positives and sip from the Trump chalice.  Aided by continually solid earnings reports and Trump’s economic agenda, the S&P 500 Index recorded five weeks of consecutive gains.  U.S. equities have enjoyed a prolonged rally on expectations that the Republicans will enact growth-inducing tax reform, fiscal spending, and regulatory changes.  At this early juncture however, Trump’s legislative agenda appears to be stalled: the plan for replacing Obamacare lacks detail and tax and spending legislation is expected to be modified in favour of reduced budget deficits.  Investors should be wary of an overbought market especially should Trump’s intended trajectory become stymied by the political realities of Washington.

The month’s first half saw equity markets continue with upward momentum.  Positive economic news helped fuel the rally in addition to ongoing expectations for the “Trump Trade”.  The U.S. jobs market contributed to the optimism with nonfarm payrolls rising 227,000 in January and average hourly earnings now up 2.5% year-over-year.  Wage growth, while potentially inflationary, is expected to support consumer spending and aid corporate earnings and profits.  On the manufacturing front the ISM manufacturing index surprised on the upside and reached its highest level since November 2014.  The Federal Reserve also chimed in saying that it expects moderate economic growth, inflation over its 2% target and a robust jobs market. Finally corporate earnings are poised to accelerate in 2017 with increasing forward guidance as well as Q4-2016’s earnings growing 8%.  Major European stock indexes were also higher on favourable corporate earnings results – 57% of companies beating expectations. Despite the political uncertainty of the upcoming French presidential election, recent data releases indicated retail growth in France and stronger factory orders in Germany.  Eurozone GDP grew by 1.6% in the fourth quarter, well below the expected 2.0%. The U.K. economy also exhibited signs of weakness, with retail sales declining over the last two months – suggesting that Brexit anxiety and rising prices related to a devalued pound are taking a toll on the U.K. consumer. Canadian and U.S. equities were up 2.8% and 3% respectively.  European equities gained 0.5%. 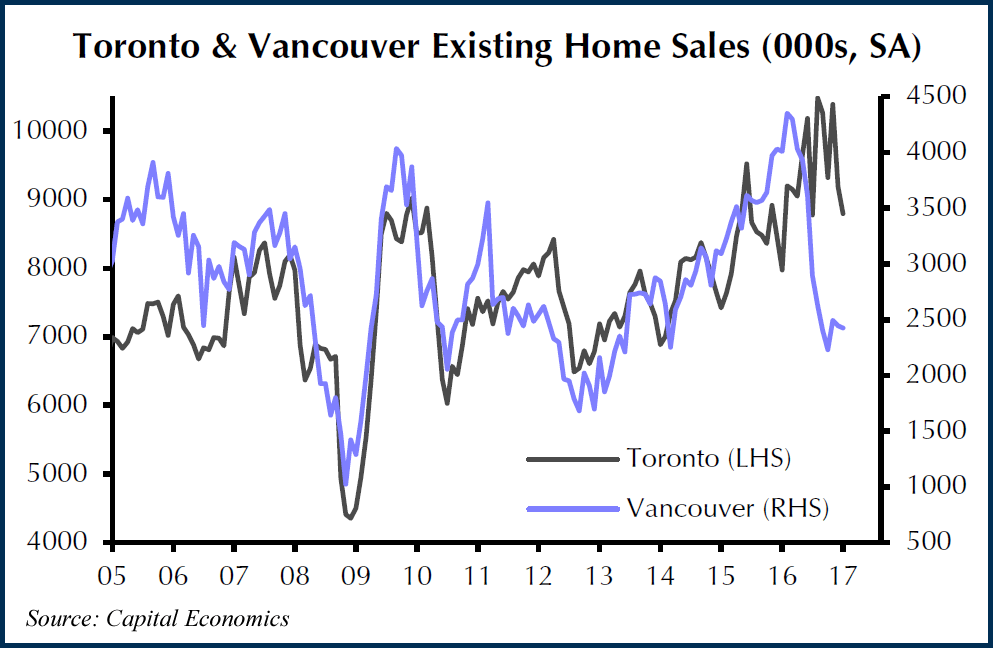 During the month’s second half, U.S. and European equities consolidated their gains while Canadian stocks sold off.  Housing data south of the border was favourable despite rising mortgage rates.  Mortgage applications increased and existing home sales reached their highest level in nearly a decade. The U.S. Fed’s published minutes indicated that continued improvement in the economy was encouraging the central bank to tighten monetary policy. Oddly enough, given the Fed’s views, long-dated Treasury yields declined as bond prices rose.  Market analysts point to the decline in the University of Michigan’s consumer sentiment index and the decreased confidence in the Trump administration’s ability to implement its planned stimulus package.  In Canada, data flows generally pointed to a healthy economy, as small business confidence rose to a two-year high and corporate profits grew again for a second straight quarter.  On the other hand, retail sales figures for December disappointed – spending declined in both dollar and volume terms.  In addition, while inflation has poked above the BoC’s 2% target, core measures that exclude energy came in 0.5% lower.  Finally, Canada’s real estate market has finally started to cool – foreshadowing wider economic growth challenges ahead. For the last two trading weeks of the month, Canadian equities were down 2.8% and U.S. and European equities ticked up by 1.5% and 0.3% respectively.

At the end of the month, Canada’s once high-flying TSX gained the least at 0.21% with most of its sectors positive but held back by Energy (-2.5%) and Materials (-3.7%).  The S&P 500 surged 3.9% while European indices advanced 1.2% – both of which had a tailwind from a 1.6% drop to the loonie – bringing them to 5.7% and 2.9% respectively.  The U.S broad-based bond index rallied 0.8% for the month with long-dated bonds contributing the most – suggesting Q4’s bond rout was overdone.  Investors face a conundrum in the fact that U.S equities have been red hot and are more expensive than ever.  While improving economic growth and corporate earnings indicate that U.S. stocks are better positioned for the short-term, valuations in Europe, Japan and Emerging Markets are more attractive. Equity market leadership could shift at some point, but for now U.S. stocks are poised to benefit from the recent political and economic momentum in the U.S.

NEWS FOR THE FIRST HALF OF FEBRUARY 2017 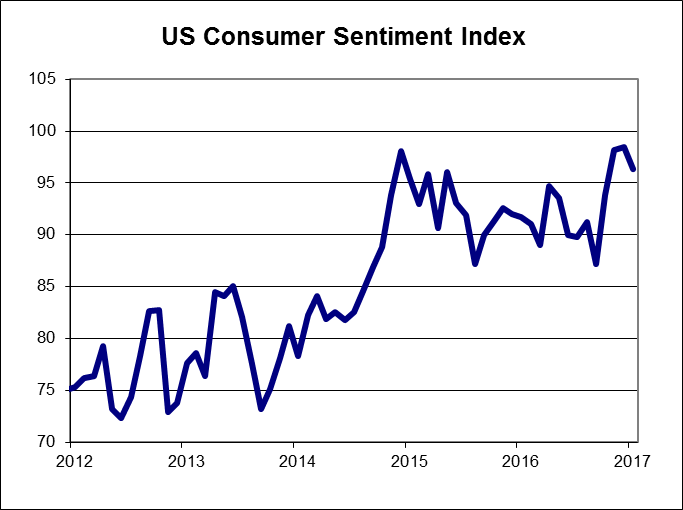 The Thomson Reuters/University of Michigan consumer sentiment index fell to 96.3 in February from 98.5 in January as future expectations for the economy fell, while sentiment about current economic conditions rose. 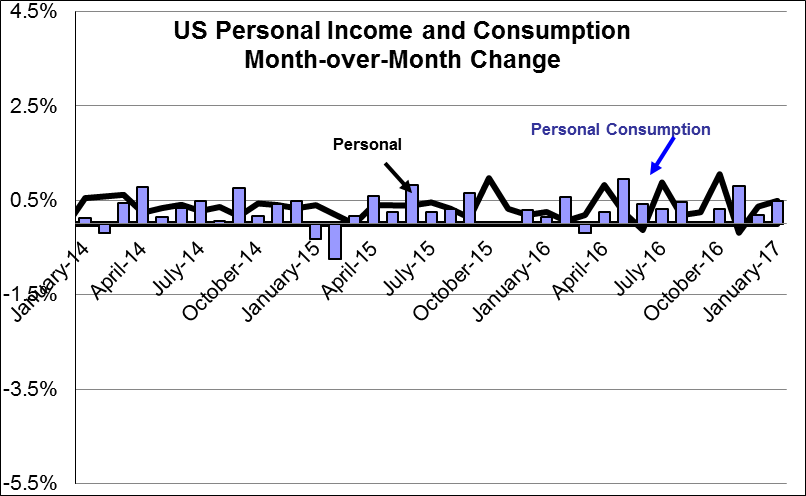 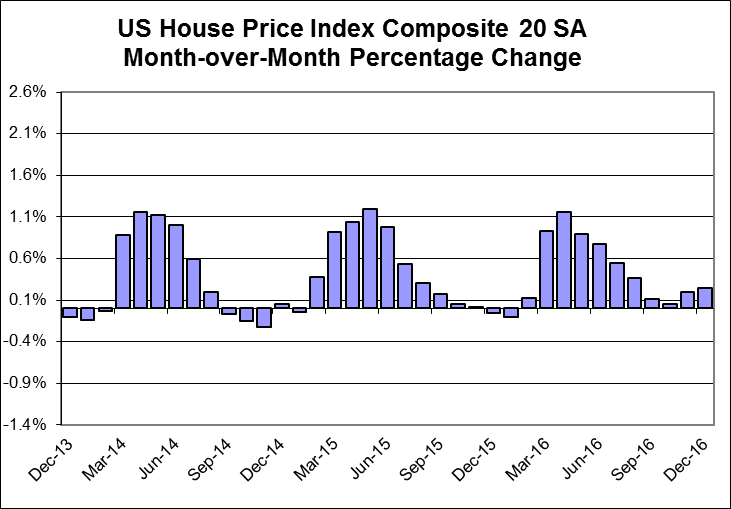 Home prices, as measured by the S&P Case Shiller home price index, rose by 0.9% in December and were up by 5.6%, year-over-year, compared to a 5.2% rise in November. 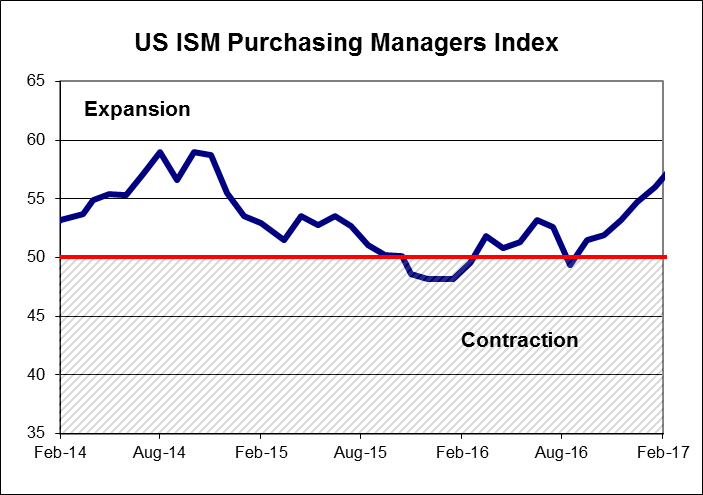 The ISM Manufacturing index rose in February to 57.5 from 56.0, the highest level since August 2014.  New orders and production increased though employment slipped.

US housing starts moderated in January, falling by 33,000 units to 1.246 million units annualized.  However, this came on top of upward revisions of 100,000 units in the prior two months.  This month’s decline came in the volatile multi-family segment.  Building permits rose, coming in above expectations.   Existing home sales in the US beat forecasts, rising 3.3% to 5.69 million units, annualized.   US new home sales rose less than expected in January, rising 3.7% to 555,000 units, on an annualized basis. Orders for US durable goods for January increased by 1.8%.  Orders for non-defence capital goods, excluding aircraft, a close proxy for business investment, fell unexpectedly by 0.4%, after rising by 1.1% the previous month.  US consumer prices rose by 0.6% in January, the strongest increase in four years, causing the annual inflation rate to rise from 2.1% to 2.5%.  The second estimate of US fourth quarter GDP came in at 1.9%, annualized, which was unchanged from the first estimate and short of market expectations of 2.1%.  Higher consumer spending was offset by lower business investment and government spending.

Canadian retail sales fell by 0.5% in December, the first decline in five months.  The Canadian inflation rate rose to 2.1% in January from 1.5% in December, with rising energy prices accounting for the increase.