Sluggish global economic growth along with new and heightened levels of uncertainty are making for both pains and gains in the equity markets. While doubts about the U.S. economic recovery have been sidelined, a whole new set of concerns are presenting additional downside scenarios.  Equity market valuations, while resilient, have expanded in response to accommodative monetary policy and their relative attractiveness compared to record-low bond yields.  Corporate profits appear to have peaked and have now entered an “earnings recession.”  Current valuations and any additional gains in equities hinge on further revenue and earnings growth.

For the last year, equity markets have been moving sideways with a penchant for volatility.  Recently though, investors have had to deal with a new and surprising macro setback found in the outcome of the Brexit referendum – relegating headlines for slowing global growth, a China hard landing, and Fed rate hikes to the back pages.  Global fragility and market jitters were on full display in the days leading up to and immediately following the Brexit vote.  The referendum vote, widely regarded as a political game of chicken, backfired in the faces of the political elite.  After several vacillations, investors priced in a “remain” vote.  The unexpected “leave” outcome, however, now signifies the potential for a seismic shift in the Anglo-Euro economic and political landscape.

One risk that has diminished, for now, is that of a rapid and steep rate hike by the U.S. Fed.  While inflation is nearing the official 2% target, a recent set-back in the jobs data along with Brexit related investor skittishness could push the Fed’s next move off to early 2017.

On the horizon is the outcome of November’s U.S. presidential election.  At present markets appear complacent.  This will change as a clear front runner emerges.  The Clinton platform appears more market friendly with specific and transparent economic policies.  The populist Trump platform, at this juncture, is murky and calls for disruptions to existing trade treaties – this would negatively impact the global economy and possibly equity valuations.

Whatever the shocks and uncertainty that may visit upon the markets from time-to-time, investors with globally diversified portfolios and an appropriate level of shock-absorbing bonds can better cope with these twists and turns.

Fed officials have been waiting for evidence of a sustained recovery in employment growth before implementing their next rate hike.  Recent reports showed manufacturing payrolls increasing by 14,000 but with the  unemployment rate ticking up to 4.9%, from 4.7%. Growth in average hourly earnings meanwhile remained muted at 0.1% last month but base effects pushed the annual growth rate up to 2.6% – its highest reading this year.  The clear acceleration in second-quarter GDP growth (targeted to be 2.5% in 2016) and the continued strength of other labour market indicators suggest that employment growth will continue to recover. In the absence of the Brexit event, one could have reasonably expected a rate hike to occur as soon as September; however, it will most likely be deferred to later in the year or early 2017.

In Canada, GDP growth has been disappointing with only a 0.1% month-over-month gain in real GDP in April following contractions in both February and March. Furthermore, the wildfires in the oil sands have cut energy production for much of last month and point to a big drop-off in May’s GDP growth. Manufacturing activity has also been underwhelming despite domestic manufacturers enjoying tail-winds from the Canadian dollar’s depreciation over the past 18 months. Home sales and residential construction continue to bolster the domestic economy.  Overall, growth is off to a poor start in the second quarter. At this juncture it is highly unlikely that the BoC will change interest rates, opting to wait and see how the year plays out.  ­­

Fixed income markets performed strongly last quarter, benefiting both Brexit fallout and the FED’s renewed dovishness: the Canadian and U.S. broad-based bond indices returned 2.5% and 2.2% in the past 90 days.  Credit markets remained calm during the Brexit melee – helped by returning inflows and rising oil prices. The U.S. high-yield bond market index rebounded for the second consecutive quarter with a 4.7% return over the last 90 days.

Given concerns over slowing global growth and a low-inflationary environment, U.S. rates are expected to move only modestly higher, while other sovereign yields remain low.   Developed world government bonds now trade at negative yields and are at all-time lows due to increased fear caused by disappointing economic growth, and quantitative easing programs.  While the outlook for bond returns is quite modest, the relative attractiveness of North American paper, especially in times of market stress, support the case for their inclusion in managed portfolios.

The surprise outcome of the Brexit vote briefly vexed the markets before enjoying a partial and fragmented rebound.  The British pound declined against the U.S. dollar and Japanese yen, falling 8.3% and 12.5% respectively.  The euro reacted to greater expectations of further European Central Bank easing by falling 2% against the US dollar.  Equity markets declined immediately after the voting results were in, with US, European and Japanese stock indices down 3%, 7.5%, and 8% respectively.  After a two-day selloff, markets rebounded and consolidated on reassurance of central bank support.  The S&P 500 recovered all of its Brexit losses to finish up 2.5% for the quarter while the Japanese and EM indexes finished up 1% and 0.8%.  The Eurozone finished down 4.4% for the quarter.

Canadian equites also reacted to the outcome of the U.K referendum – falling 3.1% before quickly recovering.    At the end of the quarter, Canada’s TSX led the developed world with a solid 5% return – its ascent greased by Oil’s 27% rally for the quarter.  Also assisting the index was a 27% and 35% gain to Materials and Metals/Mining – suggesting that the commodities may have recently found their bottom.

China, while not garnering headlines lately, continues to be a concern for the global economy.  Rebalancing their economy towards consumption and away from investment appears to be working – 65% of current GDP growth is attributed to consumption.  China’s GDP growth is expected to come in at 6.5% – well below the official target of 7%.  This deceleration is greatly affecting China’s trading partners.  In addition, Chinese firms are experiencing reduced profitability and have doubled their debt loads over the past five years – with 2015’s corporate debt now at 1.5 times China’s GDP.  State-owned enterprises account for 55% of that debt despite constituting just 22% of the economy.  As such, defaults are likely to increase.  It will be up to China’s policy makers to prevent any contagion risks to the wider economy.

Last quarter’s 2.8% rise of the U.S. dollar relative to a basket of major currencies underscored the greenback’s safe-haven status.  This relative strength will continue to feed inflation as imports become cheaper but affect export-driven multinationals.  With the U.S. Fed having higher relative rates, one could expect the euro and the yen to depreciate in the near-term. The loonie, helped by a rally in oil prices, slipped only 0.3% relative to the U.S. dollar.

Oil’s recent recovery is attributed to declining North American production and political problems in Nigeria and Venezuela.   Wildfires in the Canadian oil-sands also contributed to the rebound. However, the global supply/demand imbalance remains elevated. A slower global growth rate may spark another round of weakness in energy prices.

U.S. equity prices have weathered the Brexit storm and are now approaching all-time highs. Improving corporate profitability is necessary to fuel further multiple expansion – a likely scenario given that the U.S. should avoid a recession.  The alternative to equities is unappealing.  The current dividend yield of the S&P 500 Index is 2.2% (compared to less than 1.4% for the 10-year Treasury) with nearly two-thirds of S&P 500 companies yielding more than a 10-year Treasury. Our standard equity positioning remains unaltered: an index weight U.S. allocation, moderately underweight Canadian, overweight Europe, and Emerging Market exposure via large-cap multinationals.  High quality corporate bonds offer an attractive yield pickup. 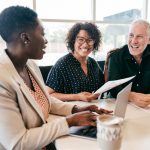