A number of tensions could have disrupted global economic growth as of late, yet sentiment remained undimmed and the world economy continued on its path of positive synchronization in the third quarter. Markets shrugged off a tragic hurricane season, conflict on the North Korean peninsula, and heightened political tensions with little concern. Steady improvements in global corporate profitability and economic activity have been identified as the net positives. Unemployment levels in Canada and the U.S. hover at pre-recession levels – a positive sign for income and consumption growth. The small drop in the Conference Board Consumer Confidence measure appears solely due to hurricane season’s impact, and is already on track to reverse, as has been the case historically following hurricane-related interruptions. Global GDP growth remains on course to reach 3.5% in 2017. 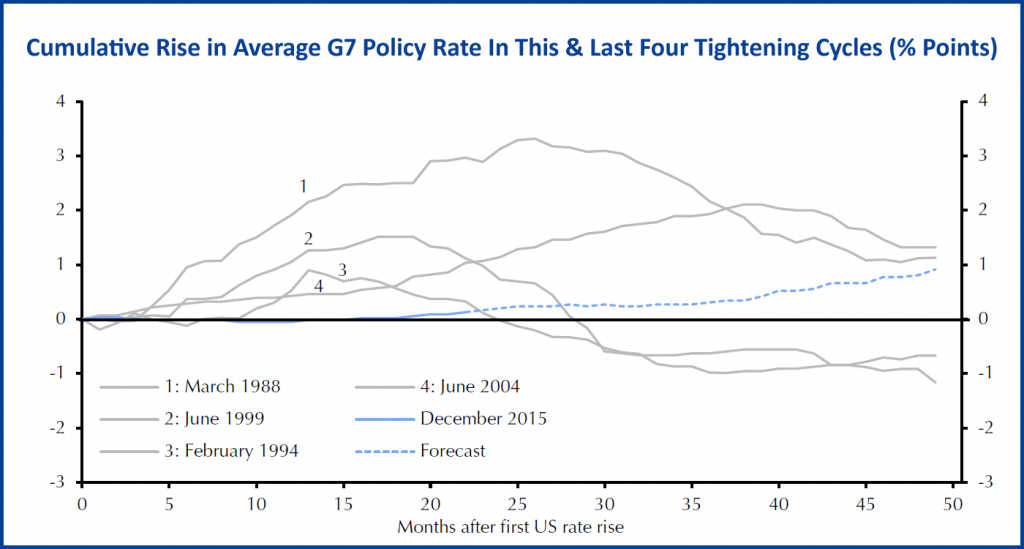 Domestically, the Bank of Canada (BoC) raised interest rates twice in the quarter amid signs of broad-based economic growth. The BoC will continue to take encouragement from incoming employment data, yet whether or not reduced labour market slack over the past 12 months will lead to a sustained rise in core inflation remains in doubt. Nevertheless, ongoing labour force gains, faster wage growth and a firming economic backdrop are more than enough reasons to expect further stimulus removal this year. Current proposals to increase taxes on small business owners will raise some additional revenue, yet at a time when the U.S. is considering slashing business tax rates, may leave Canada looking out of step. While concerns over insufficient domestic demand have eased, business concerns over taxes and regulation rose to a record high in September.

The reassuring combination of faster economic growth and low inflation also prompted the U.S. Federal Reserve to announce plans to begin balance sheet normalization in October. The upbeat tone of the FOMC’s statement and accompanying press conference by chair Yellen added to expectations for a another interest rate increase this year.

Despite a favourable global economic backdrop, risk still remains. For one, world economic growth is set to soften as the OECD takes a breather. Emerging market growth is also expected to cool down in synch with China’s deceleration. As the easy monetary policy era begins drawing to a close, global growth will likely slow, albeit modestly. With debt-to-income levels still so high, the implementation of a gradual and staggered monetary tightening pace, with some countries starting to tighten only as others are finishing, will be crucial.

Bond markets were generally flat to negative this quarter. Government of Canada bond yields appreciated as domestic economic strength supported the BoC’s decision to raise the overnight interest rate twice during the quarter. The two rate hikes, totaling 0.5%, caused markets to reprice short-term Government of Canada bond yields upwards as investors demanded higher returns to hold fixed income securities. Longer maturity bond yields also increased alongside shorter maturities, but to a lesser degree as inflationary pressures remain stubbornly below the BoC’s 2.0% target. Yet as bond yields grew, bond prices fell in response, leading to negative returns as the price declines offset returns from interest income. Fixed income strategies with lower duration profiles fared better with regard to cushioning some of the price declines over the quarter.  As well, corporate bonds outperformed government bonds this quarter. The FTSE TMX Canada Universe Bond Index returned -1.8% over the past three months and -3.0% on an annual basis.

We have seen impressive Canadian GDP growth this year and the BoC responded accordingly. The U.S. Federal Reserve pressed pause on rate hiking this quarter but announced plans to gradually unwind its balance sheet, which remains inflated due to unprecedented rounds of quantitative easing in recent years. The tightening bias from central banks is warranted given the positive economic trends, the need to normalize interest rates before a future downturn, and the lag effects of monetary policy. Even though inflation remains below target, the BoC is expected to continue raising rates as long as economic trends persist. Downward pressure on bond prices is therefore likely in the coming quarters. Fixed income strategies allocated to high-quality bonds with low duration profiles (interest rate sensitivity) will preserve value in such an environment.

Global equity markets dealt with minor turbulence in first half of Q3 triggered by geopolitical concerns, however markets reverted back to the low-volatility pattern that has been a dominant force over the last 18 months.  The combination of constructive news on the economic front and growing corporate earnings has spurred investor sentiment and shifted equities higher.

In Q3 the MSCI World index rose 5.0% in U.S. dollar terms (0.9% $CAD), with every major regional equity market posting gains during the quarter. While U.S. markets continued to advance with a 4.5% $USD gain (0.5% $CAD) to the S&P 500 in Q3, leadership in equities has shifted to international markets, with the MSCI EAFE and Emerging Markets indices rising 5.5% $USD  (1.4% $CAD) and 8% $USD (3.9% $CAD) respectively. For Canadian investors the appreciation of global equities was partially offset by the near 4% rally in the loonie relative to the U.S. dollar.

The S&P/TSX rebounded in Q3 with a 3.7% gain, after a dismal performance in the first half of 2017. A rally in crude oil prices in September supported the energy sector higher, while the financial sector received a boost with the second rate hike by the Bank of Canada that should support the Canadian banks’ interest margins.

The recent strength in the performance of Emerging Markets is similar to that of the U.S. market that has been led higher by the technology sector. The technology sector represents 25% of the MSCI Emerging Markets index, and includes companies such as Tencent Holdings, Taiwan Semiconductor and Chinese e-commerce powerhouse Alibaba. While not household names in North America, the EM versions of “FANG” stocks have generated stellar returns for investors as they have reported strong sales growth with the accelerating adoption of various technologies.

The move to increase interest rates in Q3 in both the U.S. and Canada did weigh on certain rate-sensitive sectors. The returns for the real estate and utility sectors lagged both the S&P 500 and S&P/TSX during the quarter, as investors shifted their interest to cyclically sensitive companies. Consumer discretionary stocks have severely lagged the overall market. While the stock prices of Amazon and Netflix have surged higher, a growing number of retailers, restaurants and media companies have struggled to adapt to the shift in consumer preferences.

During the quarter investors were provided with an upbeat report on corporate profits. Companies in the S&P 500 reported a 10% y/y increase in Q2 earnings, with the majority of the gains attributed to the energy and technology sectors. While oil producers benefited from a recovery in crude oil prices, the rising tide of profits in the technology sector has been broad-based from semi-conductor manufacturers to internet media companies. The profit outlook also remains constructive with analysts forecasting an 11% increase in fiscal 2018 earnings for the S&P 500, led by the energy, materials and financial services sectors.

An interesting characteristic of the equity market in 2017 has been the non-existent level of volatility in share price movements. This is somewhat of a surprise given that while economic and corporate news have been rather positive, the recent news flow from contentious trade negotiations, geopolitical threats and natural disasters has not incited negative reaction from equity investors. These drawdowns are normal as investors react to various risks that threaten to negatively impact economic growth. In 2017, the S&P 500 has only experienced a 3% intra-year decline, this compares to the average 14.2% intra-year decline in value from 1980-2016.

While the strength and resilience in stocks have been a pleasant surprise, the fly in the ointment for some investors has been rising valuation levels for the overall equity market. The richness of the U.S. market is at the forefront of this viewpoint as the S&P 500 is currently trading at 18x forward earnings, almost 30% above the 14x 10-year average price to earnings multiple. The counterargument has been that above-average equity valuations are justified when considering the currently low interest rate environment. The bulls seem to be handily winning this debate as stock prices have marched higher.

Canada’s TSX, once again, lagged its developed market peers by posting a loss of 1.6% for the quarter– while many sectors were positive, the usual suspects of Energy (-13%), Materials (-6%) and Financials (-0.9%) dragged down the index.  Year-to-date, the S&P/TSX returned only 0.7%, significantly lagging the S&P 500 and the MSCI World index at 5.6% and 7.3% respectively in Canadian dollar terms.  Under-performance of the TSX is primarily a result of the weakness in the Financials and Energy sectors, which account for just over 50% the index.  Financials retreated somewhat due to profit taking after last year’s run-up as well as on fears of limited contagion caused by Home Capital’s near brush with extinction.  Energy sector constituents struggled alongside the price of oil.  The loonie pushed above 77 US cents to a nine-month high by the end of the month (up 4% in June alone), due in part to the partial rebound in oil prices back above US$45 per barrel.  Market anticipation of an imminent rate hike was the main driver of the loonie’s 2.6% quarterly gain on hawkish remarks by BoC Governor Poloz.