The first half of 2019 has been a peculiar period for investors. Following a sharp correction at the tail end of 2018, financial markets rebounded strongly to start the year, then traded sideways for the majority of the second quarter before closing in positive territory. Expectations for renewed central bank accommodation have been driving the recent appetite for risk.

On the economic front, the combination of trade tariffs and ongoing global uncertainties has begun reflecting in several data points. Until recently, most market pundits estimated that the direct effect of tariffs to global GDP would be minor, since a degree of export substitution would occur between countries. However, trade tensions between the U.S. and Europe have recently begun to emerge. Furthermore, U.S. tariffs on Chinese imports are revealing themselves in the form of higher prices for U.S. consumers. This has caused certain corporations to consider layoffs, as elevated pricing has negatively impacted demand. Sino-U.S. tensions have also started affecting Canada, as China recently cut Canadian canola and pork exports. While these developments may be small in nature, they do not help consumer confidence and business sentiment. Unfortunately, there are no winners in a trade war.

Nevertheless, it is important to mention that leading economic indicators have been pointing toward a slowdown in the medium term, and not an outright recession. The data underlines that recent economic weakness has mostly been confined to export-oriented sectors, suggesting that the risks of a full-blown recession are contained. This would change, however, if we were to begin witnessing structural problems such as a serious downturn in job gains, signs of marked tightening in financial conditions, or a sharp drop in consumer confiderence.

Finally, it is worth noting that tensions between the U.S. and China have never solely been about trade. The world’s two largest economies are competing for access to technology, intellectual property, and ultimately global dominance. A trade deal therefore appears elusive in the short term, and volatility is expected to remain elevated for the foreseeable future. We believe the rise of China as a challenge to U.S. hegemony is the most significant macroeconomic and geopolitical event of the 21st century. How it plays out will continue evolving over the next decade.

Fixed income markets experienced spectacular returns during the first half of 2019, with the second quarter even better than the first in the U.S.  Investor reaction to central bank commentary on monetary conditions was swift and significant, more so in the riskier parts of the market, and suggests that financial markets are becoming increasingly addicted to low interest rates with the state of the economy and corporate earnings almost taking a back seat.  During the quarter, central banks in both Canada and the U.S. kept interest rates unchanged, with the U.S. signalling a tendency towards rate cuts going forward.  The Bank of Canada has been less dovish that the Fed towards rate cuts, resulting in a less pronounced decline in government bond yields than south of the border.

Yields declined across the curve in both countries, with the declines significantly larger in the U.S. than in Canada.  The U.S. 10-year Treasury yield fell 41 bps, while it declined 15 bps in Canada over the quarter.  Yields at the short end of the curve declined by a similar magnitude as the long end in the U.S., but the decline in short rates in Canada was much more muted given the Bank of Canada’s less optimistic comments regarding future rate cuts.  Credit spreads also continued to tighten over the quarter on increased investor confidence towards risk assets and the search for yield given the low interest rate environment. For the quarter, the Canadian bond market (FTSE Canada Universe Bond Index) returned 2.5%, with the long-term bond market up 4.8% and the short-term bond market increasing 0.9%. A notable sub-sector performer was the corporate long bond index, which was up 5.1%.  It should be noted that for CAD investors, the Canadian bond market was one of the top performing markets overall this past quarter, with only the Canadian equity market outperforming the bond market.

Given the low level of interest rates and the risks that abound, we believe that active management is even more important now to adding value and preserving capital as active managers are better positioned to identify and access attractive opportunities, including non-traditional strategies, and to avoid high risk sectors in the fixed income market.

As expected, global equity markets reacted favourably to central banks shifting from hawks to doves this quarter. Barring Canada, most central banks stated they are open to further easing given the challenged backdrop for global economic growth along with fears of a protacted Sino-U.S. trade war. Lower interest rates could continue fueling the broader stock market because they support economic output and corporate profitability. While equities came under pressure in May, most major markets recorded strong returns in April and June, and managed to close the second quarter in positive territory.

Canada has been one of the top-performing equity markets of late, advancing 2.6% this quarter and 16.2% year-to-date. The materials, industrials and consumer discretionary sectors drove returns over the period. South of the border, stocks were somewhat dampened by the appreciating loonie, returning 2.0% and 13.5% over the same timeframes. The materials sector – specifically gold – drove U.S. stock market returns over the period. International equities advanced 1.7% (Q2) and 9.5% (YTD). Trade and geopolitical concerns challenged Emerging Markets, which returned -1.5% in Q2 and 6.0% year-to-date.

Looking at the balance of 2019, the bullish case for equities hinges on the catalysts of trade policy, central bank accommodation, economic output, and corporate earnings.

We believe that the penalty for prematurely exiting equities is still too high, as the rally in risk assets is not over for the cycle. Yet being in its latter stages, an extended period of equity market churning would come as no surprise. In our view, trade tensions would need to ease, and global growth would need to reaccelerate in order to see new equity market heights. While elevated downside risks surrounding trade and global growth could derail the longest bull market in history, as previously mentioned, indicators are signaling an eventual slowdown and not an outright recession.

Furthermore, the stock market performance we have witnessed in the first half of 2019 serves as a reminder that volatility and risk differ considerably. While volatility is a temporary setback in asset prices, risk is the notion of permanental capital impairment. The key for equity investors is to have a proper investment policy in place in order to comfortably navigate through periods of stock market volatility. When the timing and probability of future outcomes appear this uncertain, refocusing on the controllable can be a helpful grounding mechanism.

While optimism has returned to financial markets thanks to central bankers, a variety of risks remain, and volatility will continue to be present in both bond and equity markets.  No one knows how the rest of the year will play out, but overall, the investment environment remains positive with low interest rates and modest inflation.  Corporate earnings remain supported by the abundance of cheap credit, but the impact of trade tariffs and trade tensions is beginning to affect profit growth.

While mindful of the risks, our portfolios remain strategically positioned to favour equities within the context of each client’s target asset mix as we believe the asset class provides long-term investors with superior returns.  However, our underlying investment managers are increasingly favouring companies that are best positioned to deal with the risks.  We also continue to seek out non-traditional investments that have low correlations to public bond and equity markets to enhance the risk-adjusted returns for our client portfolios. 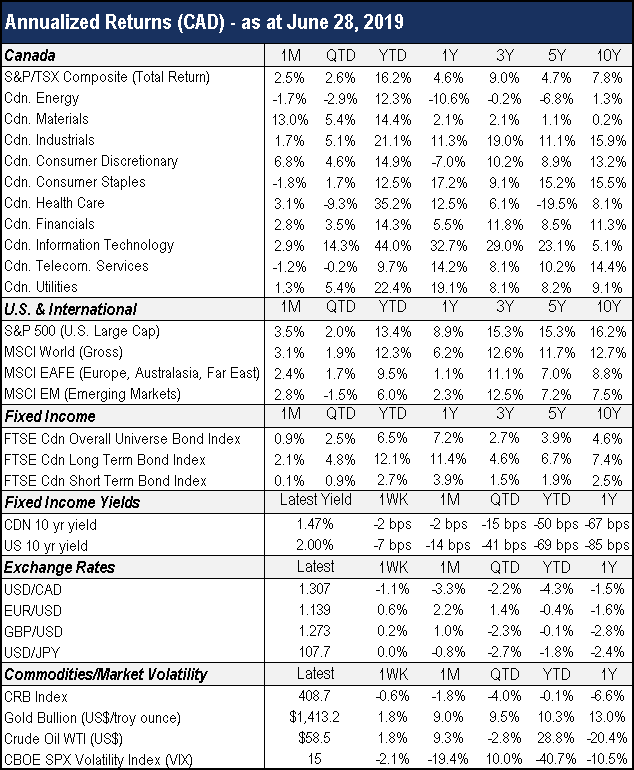