Developed world economic growth has been positively synchronized for three years now – the third longest run in history, with a pronounced upturn during the last six months. Europe’s recent economic traction in the wake of clearing a number of political hurdles has resulted in an about-face in investor sentiment towards the Eurozone.  In the U.S., a historically low unemployment rate of 4.3%, modest growth momentum, and the prospect of rising wages were more than enough reasons for the Fed to raise the policy rate 0.25% – the third time in three quarters. The ongoing gains by the labour force are expected to stimulate more consumer spending and support housing activity in the coming years.  Both consumer and business confidence are running high.  This positive outlook has also prompted the Fed signal a balance sheet reduction soon. 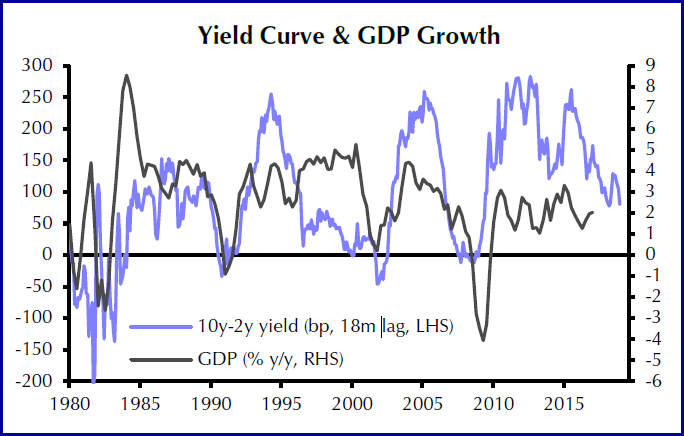 Amidst record-low volatility readings, the remainder of the year should prove interesting.  Inflation remains stubbornly below most G7 central bankers’ targets.  Oil prices are vacillating with over-supply helping to constrain inflationary pressures along with energy producer profits.  In the U.K., the reality of the Brexit outcome will soon be apparent.  At this juncture the U.K.’s growth trajectory continues unabated – it is “business as usual”, for now.  The outlook for Europe has markedly improved by the election of centrist Emmanuel Macron and his party’s control of the legislature.  With relatively high unemployment and excess capacity, President Macron is certain to improve labour market flexibility and enable business to hire more workers.  In the U.S, talk of presidential impeachment is distracting legislators and imperiling the priced-in expectations for Trump’s promises of tax reform and fiscal spending.

Canada had a strong first-quarter GDP growth reading, with ongoing momentum that points to a growth rate of 2.8% for 2017, and 1.9% for 2018. With strong economic growth last year, inflation is expected to soon follow. The Bank of Canada is fully expected to implement a “me too” quarter point rate hike – following the U.S. Fed.  With a rate hike possibly constraining consumer spending along with a cooling housing market, business investment, government spending, and international trade appear able to take on the growth baton.  Despite the favourable outlook, risks remain. A bursting of the housing bubble would be a significant setback to consumers and business alike, while the fate of NAFTA is uncertain.  Finally, a rising loonie, resulting from any rate hike, will hurt Canada’s export-driven economy and highly indebted consumers.

Despite ongoing below-target inflation readings, the Federal Reserve raised its target federal funds rate another 25 basis points in its June meeting.  Both headline and core measures have been falling for three consecutive months now – the Personal-Consumption Expenditures Price Index coming in at only 1.5% last year.  This recent soft inflation data is leading a good portion of the market to question the Fed’s signaled pace of rate hikes going forward.

Bonds experienced a global sell-off during the last week of the second quarter as a hawkish tone from central bankers at the ECB, the Bank of England, and the Bank of Canada pointed to the prospect of tighter monetary policy going forward.  In addition, U.S. yields climbed late in the quarter on positive growth data – American manufacturing activity expanding at its fastest rate in three years.  Nevertheless, the U.S. yield curve continued to flatten this past quarter on concerns of recession and policy disappointment by some segments of the market.  The spread between two and ten-year Government bonds closed the quarter at 93 basis points, a decrease of 20 basis points from the 1.13% close on March 31.  Yields on short-term Treasuries are depend on the Fed’s interest rate policies, while longer-term yields are mainly a function of the market’s forecast for economic growth and inflation.

Despite the Fed’s June rate hike, hawkish talk elsewhere, and a corresponding sell-off, fixed income markets had a decent quarter with longer-dated maturities significantly outperforming shorter maturities.  The Canadian and U.S. broad-based bond indices advanced 1.1% and 1.5% respectively in the past 90 days.  Waning enthusiasm over the prospects for Trump’s pro-growth policies has receded, resulting in lower growth and inflation expectations. As such, long-term yields have declined, introducing valuation risk should GDP growth and inflation surprise on the upside.  Higher interest rates will eventually come as the Fed implements its plan to reduce its balance sheet.  While an overly hawkish stance by Central bankers could lead to increased bond market volatility, subdued inflation pressures and policy-lag from the ECB, BoE and the BoJ mean continued fund inflows seeking relatively higher North American yields; this should help temper some of the upward yield pressure.

The S&P 500 advanced last quarter, rising 3% in U.S. dollar terms as economic expansion plods along. In fact, the S&P 500 has had its best first-half of a year since 2013 (+6%), and the NASDAQ (+13%) had its best first-half of a year since 2009.  While the upward momentum was driven by anticipation of pro-growth policies, strong economic fundamentals have, for now, ameliorated concerns that Trump and the Republicans are struggling to implement their election promises.  Recent PMI values are at a six-year high with new-orders rising and inventory declines suggesting that production should continue improving for the remainder of the year.  The U.S. labour market is now thought to be at “full-employment” levels, but still creating an average of 240,000 new jobs per month in 2017. The current unemployment rate of 4.3% is at a 16-year low.  As such, there are some signs of upward pressure on wage growth – currently at 2.5% per year.  However, it remains to be seen if wages will rise sufficiently enough for inflation to be a concern.  The U.S. consumer remains in good health, as balance sheets are strong, debt levels are down and home equity positions have improved over the last nine years

Economists project that the U.S. economy will continue to expand slowly and interest rates will rise gradually over the next year. Currently, the S&P 500 trades at roughly 17.7 times consensus earnings estimates for the next 12 months. While this is relatively expensive, we note that market valuations often rise in periods when economic growth is modest and sectors like Information Technology and Consumer Discretionary lead the way.

Canada’s TSX, once again, lagged its developed market peers by posting a loss of 1.6% for the quarter– while many sectors were positive, the usual suspects of Energy (-13%), Materials (-6%) and Financials (-0.9%) dragged down the index.  Year-to-date, the S&P/TSX returned only 0.7%, significantly lagging the S&P 500 and the MSCI World index at 5.6% and 7.3% respectively in Canadian dollar terms.  Underperformance of the TSX is primarily a result of the weakness in the Financials and Energy sectors, which account for just over 50% the index.  Financials retreated somewhat due to profit taking after last year’s run-up as well as on fears of limited contagion caused by Home Capital’s near brush with extinction.  Energy sector constituents struggled alongside the price of oil.  The loonie pushed above 77 US cents to a nine-month high by the end of the month (up 4% in June alone), due in part to the partial rebound in oil prices back above US$45 per barrel.  Market anticipation of an imminent rate hike was the main driver of the loonie’s 2.6% quarterly gain on hawkish remarks by BoC Governor Poloz.