Markets were on tenterhooks in days leading up to the U.S. election.  In the end, pollsters got it all wrong again as the populist outsider Trump surpassed the favoured Clinton in electoral votes.  In retrospect, investors were treated to a number of surprises in the election’s aftermath.  Firstly, the prospect of a Trump victory was normally treated as unwelcome by investors.  It was surprising that the initial election sell-off in risk assets was so brief – only several hours.  Secondly, investor sentiment appears to have improved dramatically, evidenced by positive market advances in the midst of many new unknowns.  Lastly, bond markets were the big losers in the election, but their abrupt demise and the almost certain Fed rate hike don’t appear to be phasing investor sentiment either.  An elevated level of political uncertainty is expected to shadow the Trump administration, as such, it is reasonable to expect volatility to remain elevated for both stocks and bonds. Thus far, the positive reaction by U.S. equities may be overzealous. Throwing caution to already elevated valuations, any optimistic view toward equities should be measured until greater clarity around the actual policies of President Trump and the Republican legislatures emerge. 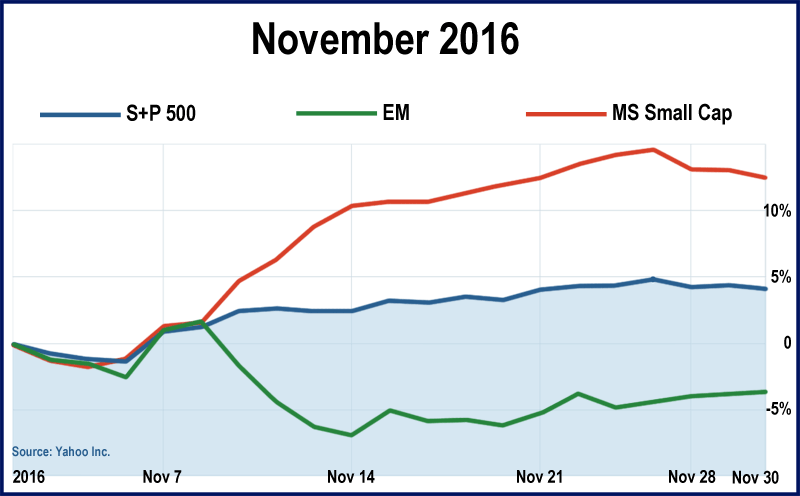 Stocks fell during the month’s first trading week as heightened uncertainty over the pending U.S. election weighed on sentiment. The S&P 500 recorded its ninth consecutive daily decline.  While the decline was small it was the longest losing streak since 1980.  Pre-election polling results indicating that Donald Trump was closing the gap on Hillary Clinton helped unsettle markets due to an overall investor preference for Clinton’s agenda, worries about a contested election, and the heightened political uncertainty of a Trump victory.  The recent precedent set by Brexit of a surprise election outcome that sent markets plunging surely was on the minds of equity investors.  European shares also fell in lock-step with the U.S., with the Stoxx Europe 600 sinking to its lowest level in more than three months. Japanese investors de-risked as the volatility in the Nikkei surged 41% and investors fled to the safe haven of Yen cash positions.   As the election results trickled in and it was apparent that Trump would be elected, safe-haven assets surged and risk assets plummeted – the overnight S&P 500 Index futures down almost 5%.  Fortunately, there was a miraculous shift in sentiment shortly after Election Day. While Trump’s conciliatory victory speech helped matters, revised investor expectations that Republican bi-cameral control and a clear Trump mandate would focus more on pro-growth initiatives such as corporate tax reform, infrastructure spending and deregulation, were prime catalyst for the sudden change of heart.  For the first half of the month, U.S. equities were up 1.9% while foreign indices were down (Europe -2.3%; Japan -1.6%; Canada -1.6%.) The positive market reaction was limited to the U.S along with diversions in sector performance – defensive and yield-oriented sectors declining and economically-sensitive cyclicals gaining.

During the second half of the month, the Trump spell on markets continued – seeing most major U.S. benchmarks reaching all-time highs. The characteristically volatile small-cap benchmark gained substantially on expectations of a Trump-induced economic growth scenario and expected business-friendly tax cuts.  U.S. market advances could also be attributed to the recent turnaround in corporate earnings – the S&P 500 profits rising 3% in the third quarter, thus reversing an “earnings recession” of five consecutive quarterly losses.  Other markets were not affected positively, and Emerging Markets indices, especially Mexico, suffered terribly on account of Trump’s anti-trade rhetoric.  The Central Bank of Mexico raised rates by 50 basis points in an effort to stave off a plummeting Peso. For the second half of the month, U.S. equities surged another 2.4% while European and Japanese markets dropped 1.7% and 0.5% respectively.  EM markets stabilized with a 0.8% gain.  The TSX gained 3.3%.

At the end of November, the U.S was the shining star with the S&P 500 and U.S. Small-Cap index returning 3.7% and 12.5% respectively.  Europe and Japan were down 2.3%.  Canada was up 2.2% – riding on the coattails of an 8% gain in energy and 5% to financials.  EMs were down 4.6% for the month on trade concerns and the potential impact of accelerated FED tightening – fund outflows amounting to $5.4B.  The broad-based U.S. bond index was down 2.2% for the month.

NEWS FOR THE FIRST HALF OF NOVEMBER 2016 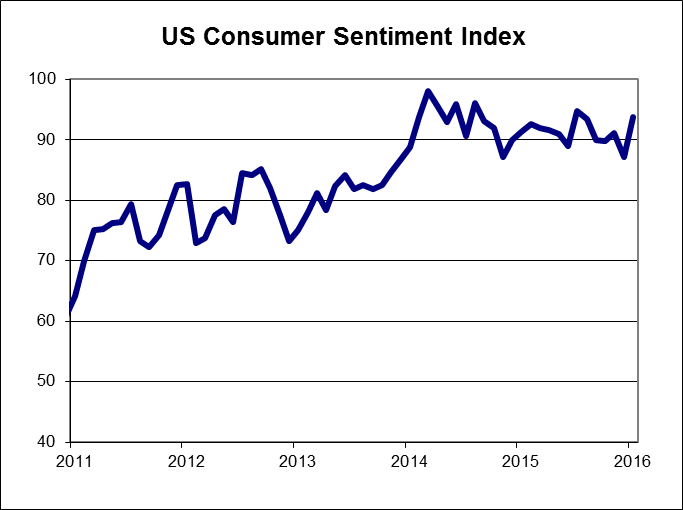 The Thomson Reuters/University of Michigan consumer sentiment index rose to 93.8 in November from 87.2 in October, as consumers’ expectations for their personal finances and prospects for the economy improved sharply. 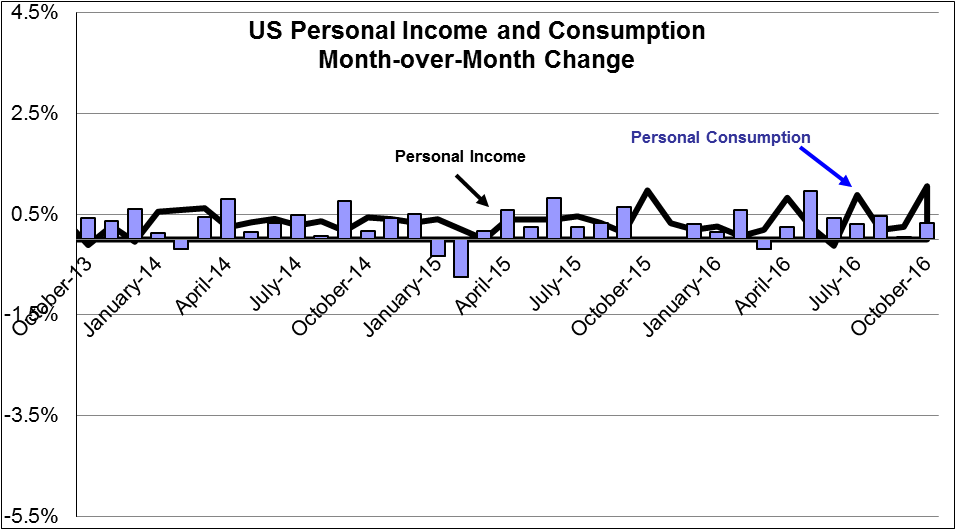 Personal income rose by 0.6% in October, the largest gain since April.   Personal spending was up by 0.3%, below expectations, but with upward revisions to prior months. 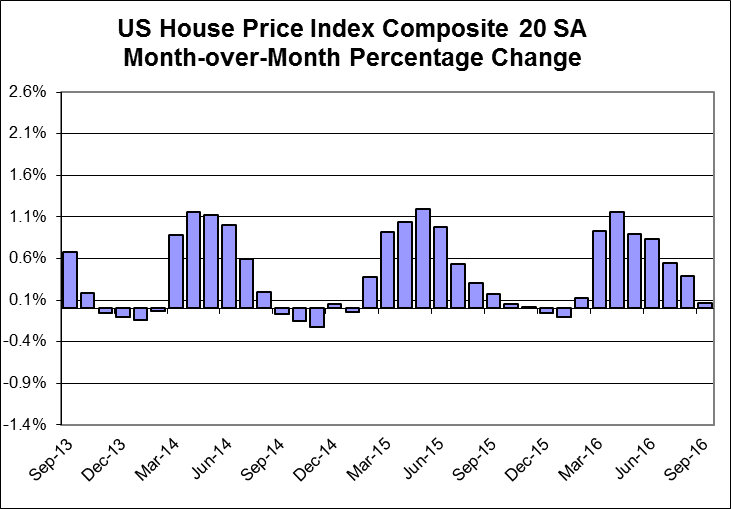 Home prices rose modestly in September with the S&P/Case-Shiller home price index up by 0.4% for the month and the year-over-year increase at 5.1%, unchanged from the previous month. 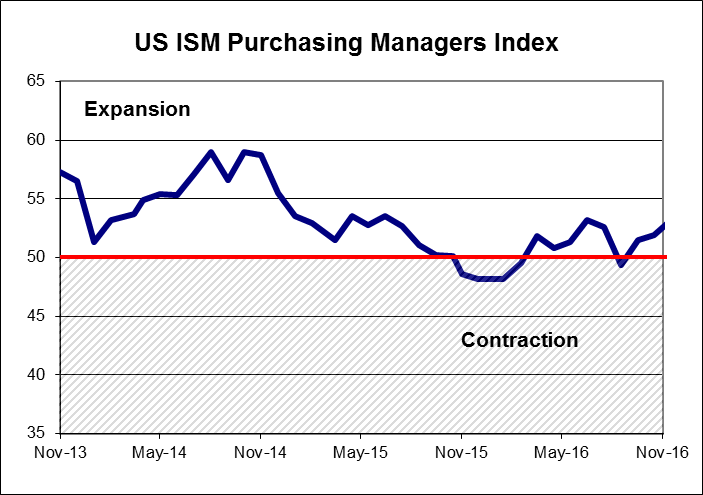 The ISM Manufacturing index rose in November from 51.9 to 53.2.  Increased production and new orders contributed to the increase, while employment decreased slightly.

US housing starts for October surged to 1.323 million units annualized, up 25.5% from the previous month, marking a nine-year high.  Building permits rose for the third straight month, rising 0.3%.  Existing home sales in the US rose by 2.0% in October to 5.60 million units, with all of the increase coming from the single family sector.   US new home sales unexpectedly declined by 1.9% in October to 563,000 units, on an annualized basis.  Orders for US durable goods for October surged by 4.8%, buoyed by transportation equipment.  Orders for non-defence capital goods, excluding aircraft, a close proxy for business investment, rose by 0.4%.  US consumer prices rose by 0.4% in October, led by energy costs, causing the annual inflation rate to rise from 1.5% to 1.6%. The second estimate of US third quarter GDP came in at 3.2%, annualized, up from the preliminary estimate of 2.9%.  Higher consumer spending, offset by lower business investment and inventories, accounted for the increase.

The Canadian economy registered a 3.5% increase in third quarter GDP, reversing the 1.3% decline of the second quarter.  Exports led the way with the resumption of energy production following the Fort McMurray wildfires in the second quarter.   Consumer spending also registered a healthy gain.  Canadian retail sales rose by 0.6% in September, with motor vehicle sales leading the way.  Canadian manufacturing sales increased by 0.3% in September, the fourth straight month of gains.  The Canadian inflation rate rose to 1.5% in October from 1.3% in September.  Rising prices for energy, shelter and transportation accounted for the increase.