As noted in last month’s market summary, since the Great Recession investors have been on the lookout for indicators that could spell the end of the bull market.  It would appear that events in March could be providing equity markets with a reason to dial back on the euphoria.

On the economic front, various key data releases during the month suggest slowing economic growth in Canada, while the data in the U.S. remained relatively robust apart from a slowdown in consumer spending which appears to be driven by an unwinding of the surge in vehicle sales late last year.  Tighter mortgage regulation which came into effect at the beginning of the year combined with the interest rate increases in 2017 appear to be having the desired impact on the Canadian housing market, with house prices down in February in most major markets, home resales down for two consecutive months in Toronto and weak single unit housing starts in February.  In addition, retail sales continued to disappoint in January for the third consecutive month, while the employment numbers were mixed in February.  Despite the softer economic data in Canada, inflationary pressures continued to mount in February. 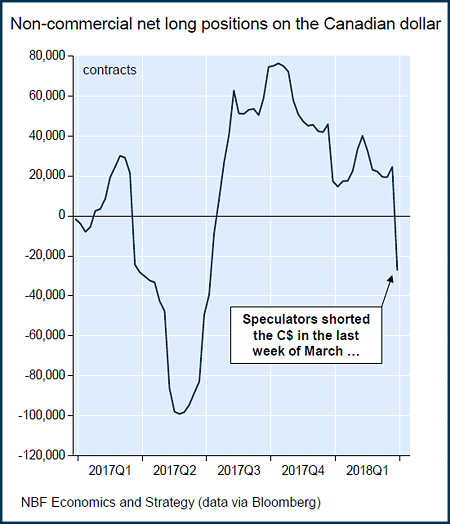 In spite of the continued increase in inflationary pressures, the Bank of Canada left the overnight rate unchanged at 1.25% in early March and indicated that it was in no rush to increase interest rates due to both trade-related uncertainties, as well as the potential impact of tighter regulation and previous interest rate increases on the housing market.  The Fed, on the other hand, increased interest rates again in March by 25 bps and stated that it was encouraged by the economic outlook which “has strengthened in recent months”.   While the market was not surprised by the central banks’ rate decisions, the fixed income market was less than calm throughout March.  Short-term rates were little changed over the month, but long-term rates declined in both countries, with bonds once again acting as the safe haven during the equity market turmoil experienced in March.  For the month, long-term bonds outperformed short-term bonds and government bonds outperformed corporate bonds in both countries.  Overall, the Canadian bond market was up 0.8% in March.

Equity market volatility remained higher in March relative to recent years but was much more subdued compared to February.  Despite the lower volatility, equity markets posted negative returns across most markets in the developed world with one of the best performing markets being Canada.  The selloff was broad-based with much of it driven by fears of a global trade war, instigated by President Trump’s statements.  Cracks also began to appear in the upward trajectory of U.S. technology companies, triggered by the recent Cambridge Analytica/Facebook scandal and related data privacy issues, which further weighed on U.S. equity market returns and introduced a nervousness surrounding technology stocks not seen in a long time.  Despite the overall negative tone in March, the flight to safety benefited certain industries, namely materials (gold) and utilities.  The energy sector was also a bright spot during the month as oil prices continued to move higher amid political tension in the Middle East and concerns of declining production in Venezuela.  For the month, the S&P/TSX Composite, S&P 500 and MSCI All Country World Index returned -0.2%, -1.9% and -1.5%, respectively in CAD. Year-to-date, the three indices posted returns of -4.5%, 2.1% and 2.2%.

In currency markets, the loonie continued to weaken against the U.S. dollar, closing the month at 77.6 cents USD.  The loonie appears to be one of the least loved currencies, with speculators shorting the currency for the first time since last summer. While the continued decline in the CAD provides a benefit to investment returns denominated in U.S. dollars, it is not great news for the pocketbooks of Canadians purchasing goods or services from abroad.  Although the USD continued to strengthen against the CAD, it resumed its weakening trend against major currencies (JPY, EUR and GBP) in tandem with the fear of a global trade war. 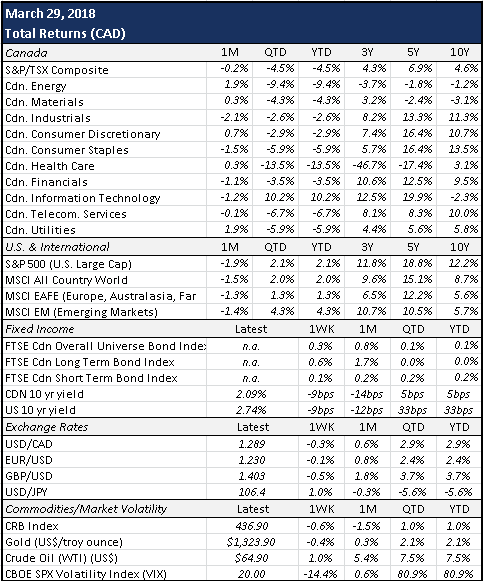