Global stock markets displayed their best year in the decade, and investors were rewarded for tolerating geopolitical and economic tensions in 2019. The holiday spirit rang true in the final month of the year, contrary to the tumultuous market activity last. While repeat market “all time high” headlines can be exciting, we can’t help but question if we are experiencing a synthetic return supercharge. Whether or not the growth is sustainable, investors certainly are thankful to have had a worry-free holiday with the S&P 500 surging nearly 28% this year, its strongest performance since 2013. These gains were not isolated to U.S. equities, most assets classes and foreign markets participated in this rally.

On the economic front, the December cheer carries into a promising January with an expected signing of a “phase one” deal in the long-awaited trade agreement between the United States and China. Markets anticipate this step will reduce uncertainty and alleviate downward pressure on economic activity that has been a concern for investors. Alternatively, a review of economic data reveals continued moderate growth through the fourth quarter in the U.S., mainly fueled by consumer spending. Times are certainly changing, though the impression is of a stabilizing or even rising economy, there are some red flags in the background. The Baltic Index, which measures the cost of shipping physical goods has been consistently declining as demand for shipping physical products weakens. Another concern is the level of debt, especially in the business sector. The IMF has demonstrated unease over the high level of borrowing many large businesses have undertaken over the past decade, and what impact this would have when a recession occurs. Across the pond, the December victory of Prime Minister Boris Johnson in the elections brings us one step closer to the official Brexit, expected on January 31. A key question in 2020 will be what economic impact an official Brexit will have as the U.K. and the E.U. reform their trade relationship.

In fixed income markets, U.S policy makers opted to hold federal funds rate steady along with no plans for change in 2020. While some would say no news is good news, some market participants remain skeptical. Canada is following suit, with no incentive to modify rates in the near future.  The planned signing of the Trade Deal caused several investors who had flocked to bonds in early 2019 to sell their hedging positions. Though dipping -1.0% in December, Canadian long-term bonds had a positive year closing at 14.6%, outperforming short-term bonds which returned 3% for the year.

Equity markets did not break the positive trend and posted positive monthly returns to end the year. The MSCI World Index rose nearly 22% in 2019 reflecting the strength of stock markets in the developed world, the highest return since 2009. A strong recovery in European and Asia stock markets in the final months of the year, along with leadership from U.S equity were key catalysts to equity performance. The Canadian stock market gained 1.0% in December closing a strong year at 25.1%, 2019 offered the biggest rise since 2009. The Canadian Information Technology and Canadian Utilities sectors led in terms of performance closing the year with staggering return of 70.9% and 41.6%, respectively.  The U.S. equity market gained 1.8% in December and 27.5% for the year.

The dust is now settling after a rewarding decade for investors and many are celebrating a new beginning. Could 2020 kick-off this century’s version of the exuberant Roaring Twenties? Though we still have many challenges to overcome, we are the most connected, efficient and educated we’ve arguably ever been. How will this translate into future growth opportunities? Africa may just be the underdog to outperform this decade as the dynamics of the recent new trade agreement matures, opening borders and contributing to continental and global prosperity. We maintain a positive but watchful outlook with new challenges to navigate as well as new opportunities for wealth expansion in this new decade. Timeless themes of investment discipline and long-term perspective govern our investment process. 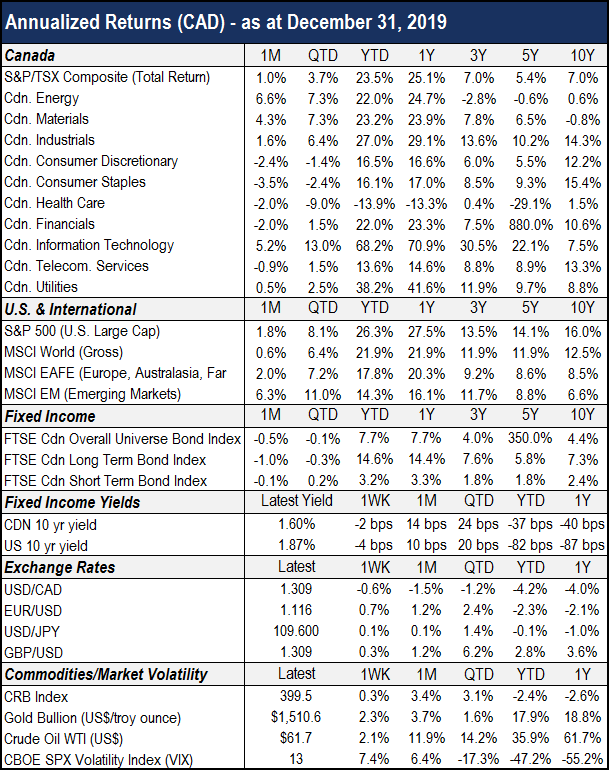