January 2017 began on the same upbeat note that the fourth quarter of 2016 finished on.  While the Trump rally saw a pause on profit-taking at the end of December, equity markets were quick out of the gate due to the same factors that have driven prices higher since November — enthusiasm over President Trump’s legislative agenda and stronger economic data.  Recent economic trends from Europe and the U.S. indicate an improving economic backdrop going forward, which should be supportive of corporate profitability and equity valuations.  However, recent market optimism for the Trump regime will most certainly be tested as doubts arise with respect to the substance of his policies.

The month’s first half saw equity markets begin the year on a positive note, as investors appeared to welcome some good economic data, not only based on the “Trump trade” but also on expectations of healthier corporate quarterly earnings reports – expected earnings growth targeted to rise 11% in 2017.  The current earnings momentum marks a notable turnaround from five consecutive quarters of earnings recession that began in early 2015.  Markets reacted favourably to the release of the U.S. Fed’s minutes, which emphasize that the pace of future rate hikes will be “gradual” and that the central bank will lag the expected inflationary curve.  Finally, the U.S. monthly payrolls report was on track, with 156,000 new jobs in November and upward revisions to prior months. Signs of wage growth were evident, rising 0.4% for the month and 2.9% year over year, the highest in several years.  Signs of consumer strength were also evident with retail sales growing 0.6% in December – the gains concentrated in autos, furniture, and online sales.  Investors got their first taste of Trump policy risk as they reacted to the President’s first press conference since the election. Trump vowed to “create new bidding procedures for the drug industry,” which caused the nine largest pharmaceutical firms to decline by almost $25 billion in market value immediately following the comments.  Overseas, Germany posted its fastest pace of growth in five years, fueled by a rise in private consumption, rising wages, lower unemployment and record exports – recording an annualized growth rate of 1.9%. Canadian and U.S. equities appreciated 1.3% and 1.6% respectively.  European equities were slightly negative to flat. 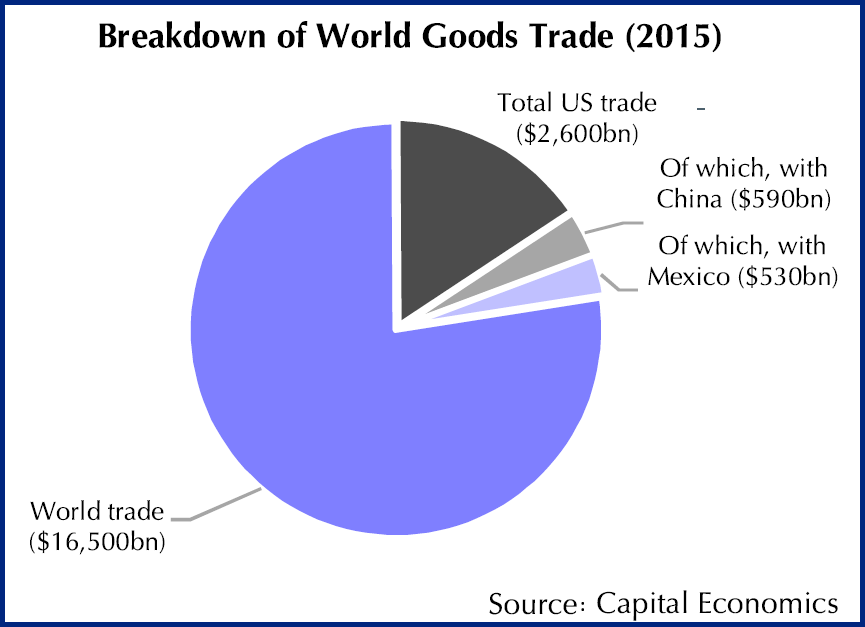 In the month’s second half, equities initially trended lower as investors waded through the potential changes posed by President Trump’s inauguration. The political uncertainty kept trading volumes light along with a modest “Dump Trump” reversal as many of the stocks that initially benefited from the election underperformed, while lagging sectors did better.  Financial shares, thought to benefit from deregulation and improved lending margins, pulled back sharply either due to profit taking or policy uncertainty. Conversely, defensive stocks (consumer staples and utilities), which have been out of favour recently, experienced solid gains.    While not impressed by the executive order to withdraw from the Trans Pacific Partnership, markets soon overlooked the President’s “America first” trade sentiment.  Markets finished the month strongly on news of Trump’s signalling for deregulation, approving the Keystone XL and Dakota Access pipelines and grand plans for infrastructure projects.  Helped in part by positive corporate earnings reports, the Dow Jones Industrial Average surpassed the 20,000 milestone and the S&P 500 reached yet another high.  Overseas, European equites held their own despite signs that the U.K. is heading for a hard Brexit.  For the last two trading weeks of the year, Canadian, U.S. and European equities appreciated 0.5%, 1.9% and 0.8% respectively.

NEWS FOR THE SECOND HALF OF JANUARY 2017 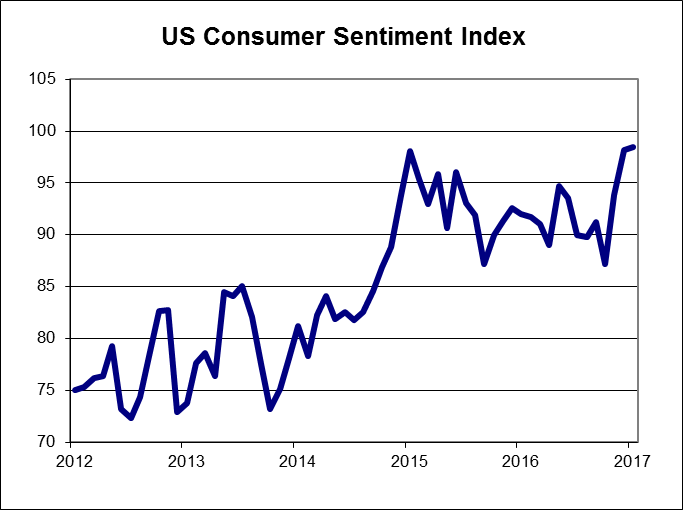 The Thomson Reuters/University of Michigan consumer sentiment index rose to 98.5 in January from 98.2, as post-election confidence surged, driven by a more optimistic outlook for the economy and job growth. 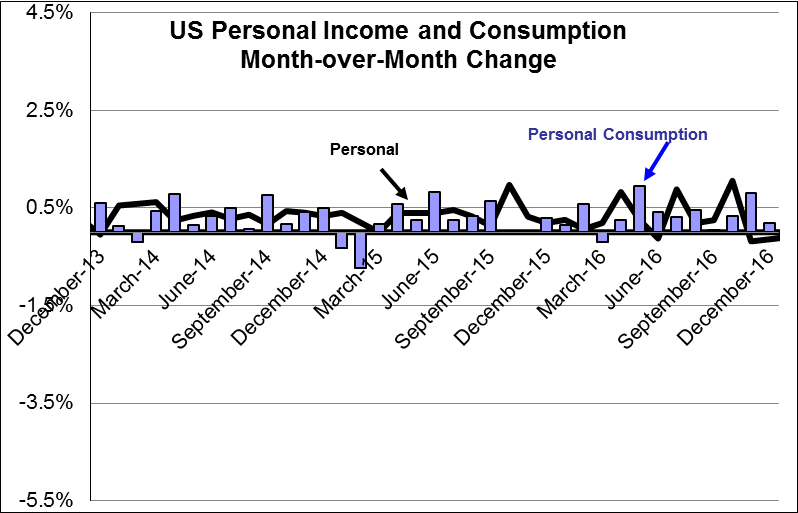 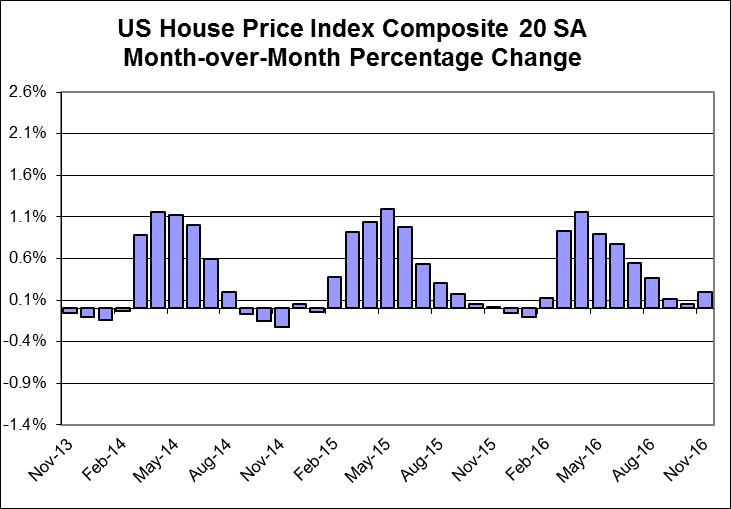 Home prices, as measured by the S&P Case Shiller home price index, rose by 0.9% in November with the  year-over-year increase at 5.3%, up from 5.1% in October. 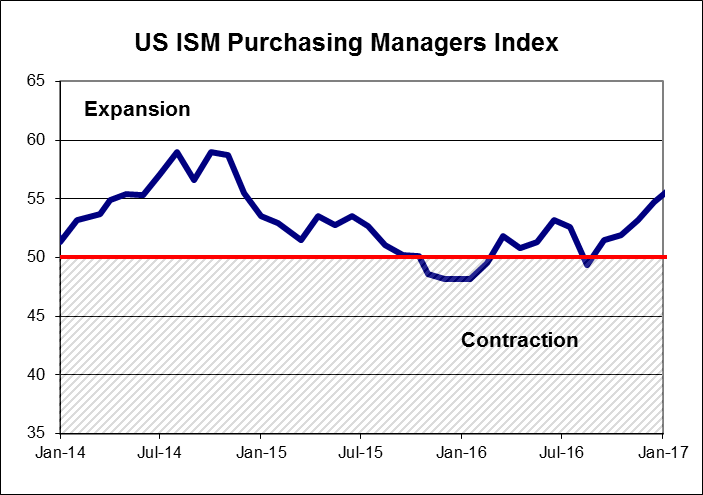 The ISM Manufacturing index rose in January from 54.5 to 56.0, the highest level in two years.  Increases in new orders and employment contributed to the rise.

US housing starts rebounded in December, rising by 124,000 units to 1.226 million units annualized.  The entire gain came in the volatile multi-family segment.  Building permits declined marginally and came in below expectations.  Single family permits rose for the fifth straight month to the fastest pace in four years.  Existing home sales in the US fell by 2.8% in December to 5.49 million units, slightly below forecasts.   US new home sales unexpectedly declined by 10.4% in December to 536,000 units, on an annualized basis.  It was the lowest reading since February. However, for the year, new home sales were the highest since 2007.  Orders for US durable goods for December decreased by 0.4%.  Orders for non-defence capital goods, excluding aircraft, a close proxy for business investment, rose by 0.8%.  US consumer prices rose by 0.3% in December, led by shelter costs and gasoline, causing the annual inflation rate to rise from 1.7% to 2.1%.  It was the first time the inflation rate exceeded 2% since 2014.  The first estimate of US fourth quarter GDP came in at 1.9%, annualized, short of the consensus estimate of 2.2%.  Higher consumer spending, offset by lower net exports, were the highlights of the report.