Investors are grappling with the fact that central bankers are altering course from their unprecedented low interest rate policies necessitated by the 2008 financial crisis. With expected fits and starts, rate normalization is underway as the economy exhibits stability.  July’s market activity depicts just how nervous markets are over the prospect of rising rates – something that should be construed as good news.  In contrast, markets responded positively when central bankers expressed caution over factors such as low inflation and tepid growth.  Other news related to corporate earnings also helped equity prices advance as well as positive economic releases from China.  A 3.9% surge to the loonie, precipitated by the BoC’s response to stellar GDP growth figures, tempered portfolio returns.

The month’s first half started off with seasonably light trading volumes and on a sour note as the S&P 500 recorded its worst daily decline since May.  The blame was pointed at minutes from the Federal Reserve’s June meeting that indicated a third rate hike was coming this year. The hawkish sentiment was echoed overseas as minutes from a recent ECB policy meeting similarly indicted removing their easing bias.  Equities later recovered and surged – the S&P 500 touching new intraday highs.  The optimism was in reaction to central banker backpedaling.  During Fed Chair Yellen’s scheduled congressional testimony, she struck a more dovish tone and signaled that the Fed was in no rush to tighten monetary policy.  Investors also took solace, expecting that four months of below target inflation data will throw a wrench into the Fed’s plans.   European stock indexes also reacted positively to BoE’s Deputy Governor Broadbent comments that he supports lower interest rates. In Canada, the BoC, for the first time in seven years, increased interest rates by 0.25%.  The BoC forecasts economic growth of 2.8% this year.  For the first half of July the S&P 500 Index gained 1.5% while Canada’s TSX finished even but the loonie surging 4.8%.  European indices gained 3% and Emerging Markets soared 3.9%. 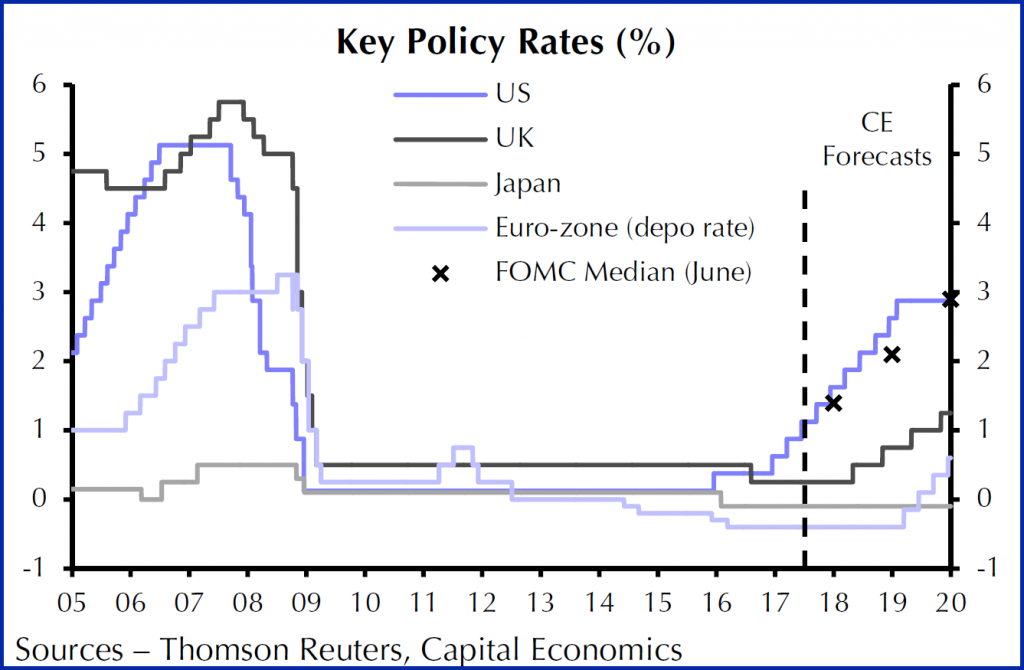 During the month’s second half world equity markets inched upwards on account of Q2 preliminary earnings reports from the S&P 500’s constituents. Earnings strength is expected to help offset the tendency for a pullback to current-lofty price-to-earnings ratios. Earnings growth for the S&P 500 is trending 7% thus far. European indexes also benefited from corporate releases with one-third of companies reporting their earnings and sales results tracking slightly ahead of estimates. Investors were tempered in their response as the earnings results compared poorly with previous quarters’ pace.  Investors are also concerned about the strong Euro – now at its highest level against the U.S. dollar in 24 months.  European companies are export orientated; the stronger Euro makes their goods less competitive abroad.  Markets were upbeat about China’s Q2 GDP growth rate of 6.9%- matching the first quarter’s trend.  The latest quarterly expansion was a positive surprise, underscoring the Chinese economy’s resilience in the face of tightening monetary policy – now on track to post its first pickup in GDP growth since 2010. For the last two trading weeks of the month, Canadian equities were down 0.5% while U.S. and European equities both rose by 0.6% and 0.7% respectively.  Emerging Markets advanced another 1.7%.

At the end of the month, Canada’s TSX was barely even, with most sectors in the red but offset by the once-beleaguered sectors of Energy (+3.3%), Materials (+1.7%), and Mining (+6.9%).  The S&P 500 was up 1.6% while European indices advanced by 2.4%.  The headwind of another surprising 3.9% gain to the loonie brought U.S. and European indices down to -2.2% and -1.5% respectively.  The outlook for equities, especially in the U.S., will depend on earnings growth.  The earnings recession of 2014 and 2015 was due to the rapidly rising greenback. This reversing trend may cause equity market leadership to change as the Euro strengthens and the greenback weakens.

NEWS FOR THE SECOND HALF OF JULY 2017 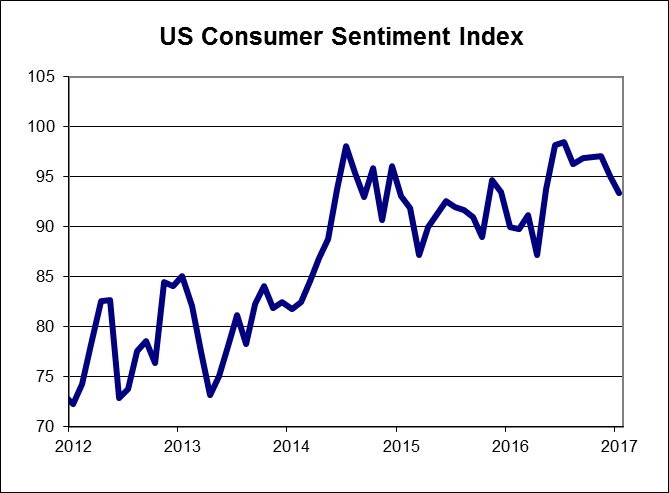 The Thomson Reuters/University of Michigan consumer sentiment index fell by 1.7 to 93.4 in July.  Sentiment about current conditions rose modestly, but was more than offset by the decline in the reading of future economic expectations, which are split among party lines in the U.S. 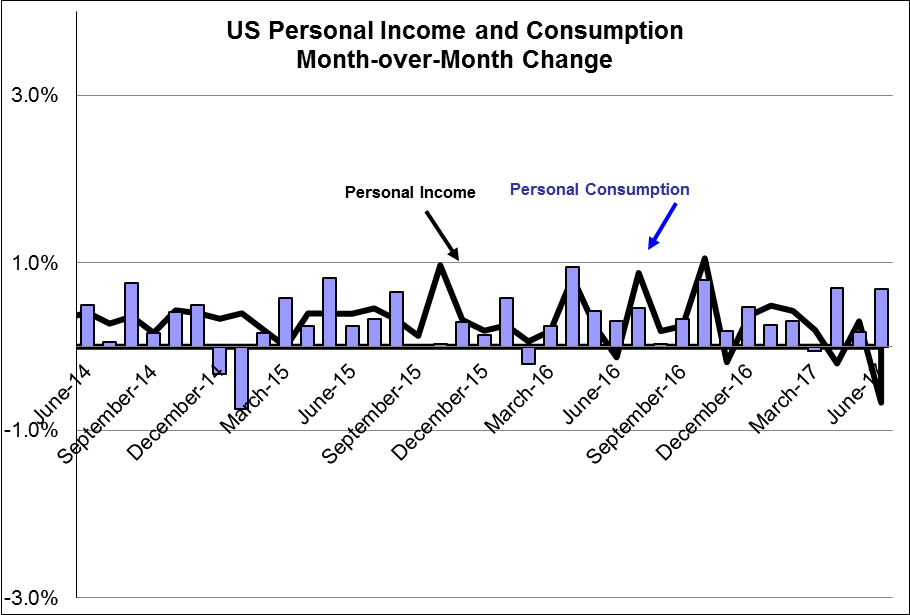 Personal income was flat in June as decreases in investment income were offset by a 0.4% rise in wages and salaries.  Personal spending rose by 0.1%. 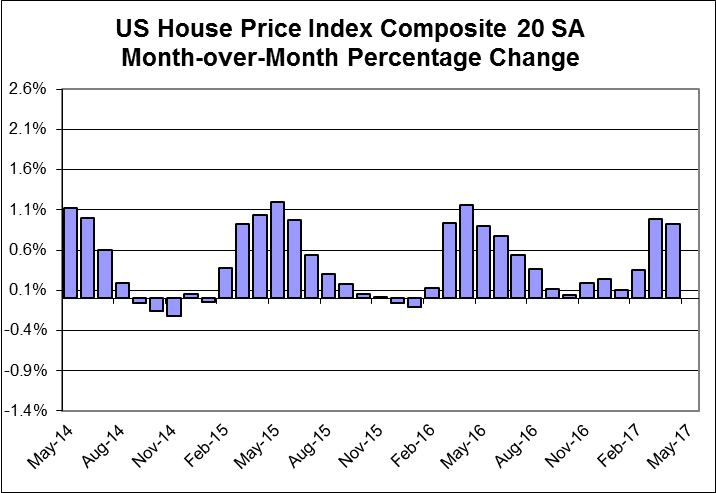 Home prices, as measured by the S&P Case Shiller home price index, rose by 0.1% in May and were up by 5.7%, year-over-year, compared to 5.8% the previous month. 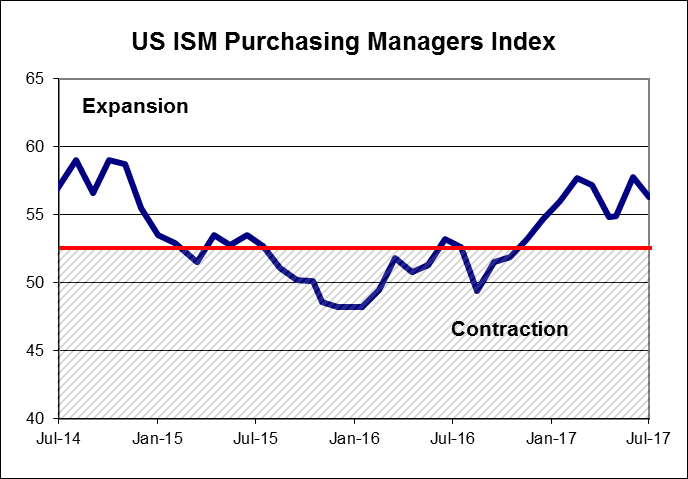 The July ISM Manufacturing index fell to 56.3 from 57.8, but the month’s reading was above the average reading for the past year indicating that U.S. manufacturing is continuing to grow at a healthy pace.

US housing starts surprised to the upside in June, rising by 8.3% to 1.215 million units, annualized, the highest level since February.  Building permits rose by 7.4% to 1.254 million, the highest level since March.  New home sales in the U.S. rose by 0.8% to a seasonally adjusted annual rate of 610,000 units, with May’s number being adjusted downward.  Existing home sales in the U.S. fell by 1.8% to a seasonally-adjusted annual rate of 5.52 million units in June.  Orders for U.S. durable goods rose by 6.5% in June, with most of the surge coming from orders for planes from Boeing.  Orders for non-defence capital goods, excluding aircraft, a close proxy for business investment, fell by 0.1%.  The first estimate of US second quarter GDP came in at 2.6%, up from the first quarter growth rate of 1.2%.

Canadian retail sales for May rose by 0.6%, helped by a 2.4% rise in vehicle and auto part sales.  Canadian manufacturing sales rose by 1.1% in May, with most of the increase coming from durable goods.  The Canadian inflation rate for June fell to 1.0% from 1.3% in May.  Canadian GDP rose by 0.6% in May, the seventh straight monthly increase, and on track for the strongest first half performance since 2004.  Growth was broadly based as 14 of 20 subsectors showed positive growth for the month.