Despite exacerbated levels of political uncertainty and global unrest, capital markets are remaining uncharacteristically stable. Implied volatility measures for the S&P 500 have been mainly dormant, now at decade lows. Global equities are only 0.4% below all-time highs. And money continues to stream into riskier developing nations. Even last week’s “Triple Threat Thursday” – regarded as 2017’s greatest concentration of potentially market-moving events, was met with a yawn as market risk and price volatility were only fleeting. Even the British Pound, after dropping because of the UK election’s hung parliament result, is recovering against the Euro and the Dollar, supported by hopes that a weakened government stance could lead to a “softer” and less economically damaging Brexit agreement.

The above pattern has held for the better part of the year. While investors remains on edge – over everything from ECB purse string tightening and the fragile state of the EU, to the turmoil surrounding the Trump administration, to oil prices and diplomatic disputes between Qatar and its Arab neighbours – financial markets chug along. Pundits coin it the “Teflon market”, attributing the lack of contagion to the notion that investors are disregarding geopolitical risk as idiosyncratic and instead directing their attention to a strengthening global economy with low inflation. Just last week our independent macroeconomic research firm, Capital Economics, augmented their 2017 global GDP forecast to 3.5%, up from 3.3% as at April. They also released positive GDP growth forecasts for all of the G7 economies this week (see Charts 1 & 2), and discussed how accommodative global monetary policy will continue to reinforce the world economy, as well as equity and bond markets, for the foreseeable future.

Alas, this does not imply that the odd bouts of angst won’t twist and turn capital markets in the short-term. However, investors are perhaps seeing through them, reassured by the global economy’s continuously supportive underlying fundamentals and the fact that geopolitical risk rarely results in prolonged negative market outcomes over the long-term. Though it may be tempting for some to consider news headlines when making investment decisions, history will remind us that this rarely pays off. And predicting market moves based on which way the political winds are blowing can downright cause you to lag market indices.

In times like these we remind ourselves that investing has always required discipline, and in an era of 24-hour financial media, “fake” news and Twitter, sifting through a constant bombardment of investment noise requires more discipline than ever before. If it wasn’t already hard enough to identify what is and isn’t important from this myriad of information, now we must spend time corroborating what is and isn’t the truth. Without a disciplined strategic approach, such information overload can surely fog an investor’s decision-making. Our longstanding strategic partnerships with leading institutional investment managers both in Canada and internationally make it easier to stay calm amidst times of unrest. Our specialty managers are ideal partners because their approach to successful investing is by aligning themselves with strong management teams that have clear execution strategies and the potential for long-term value and sustainable growth, rather than for short-term results. And although even the best companies will experience setbacks from time to time, a tried and tested investment philosophy, combined with the discipline to look beyond the headlines when assessing market fundamentals, can be two of the most powerful tools in an investor’s arsenal. 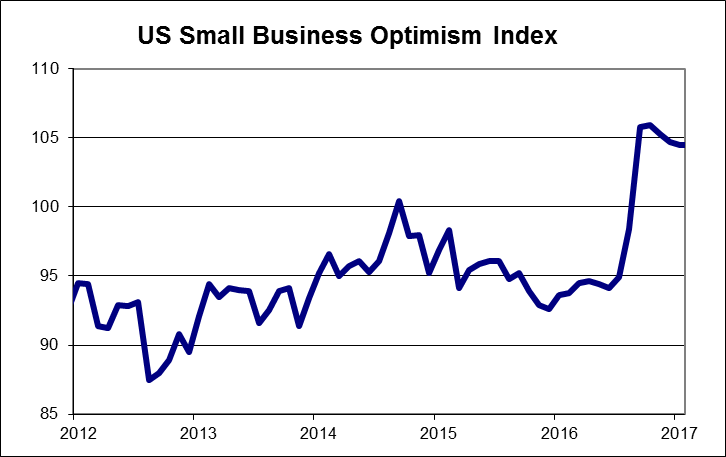 The Index for May matched its strong performance in April of 104.5. That means the Index has been at a historically high level for six straight months. 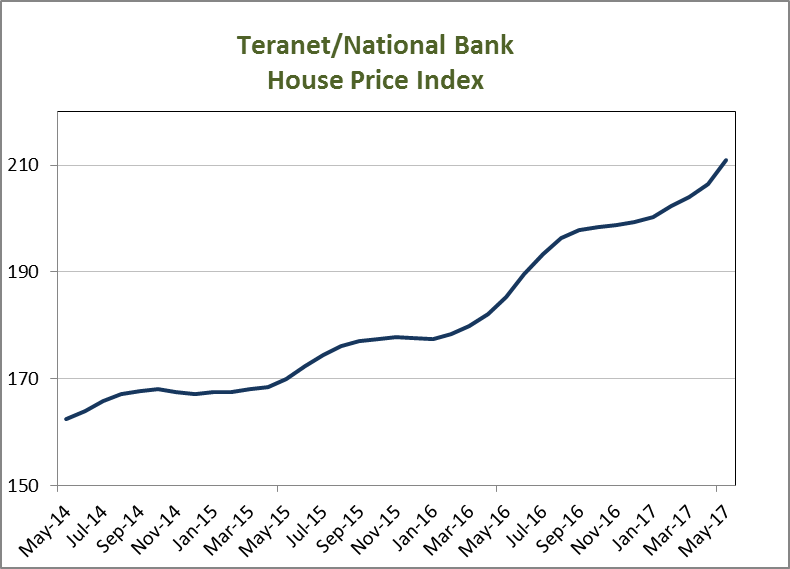 In May, the Teranet–National Bank National Composite House Price Index™ was up 2.2% from the previous month, the largest May gain in the 19-year history of the index. 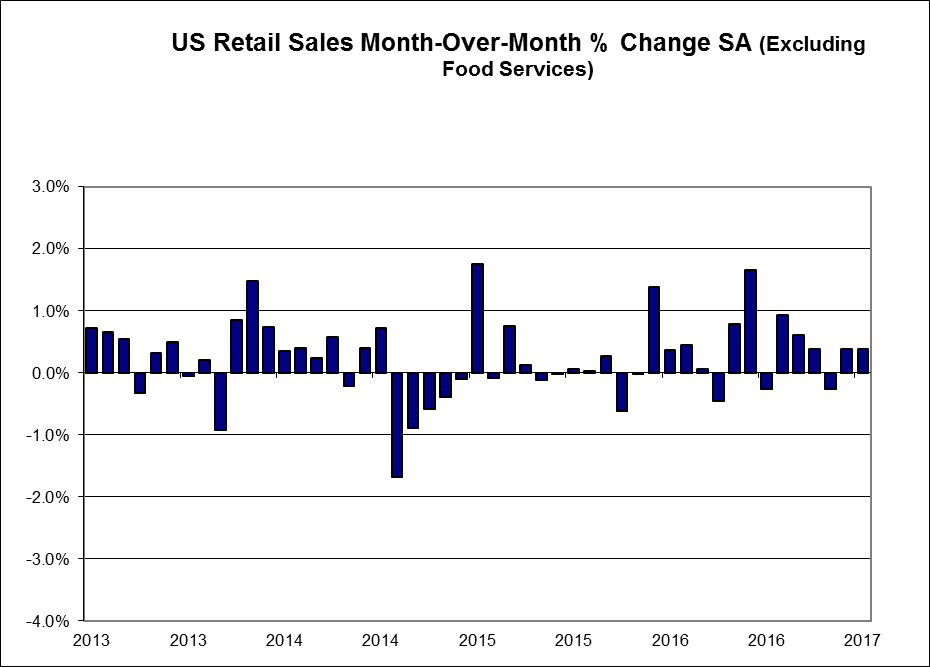 U.S. retail sales recorded their biggest drop in more than a year in May amid declining purchases of motor vehicles and discretionary spending, which could temper expectations for a sharp acceleration in economic growth in the second quarter.­­ 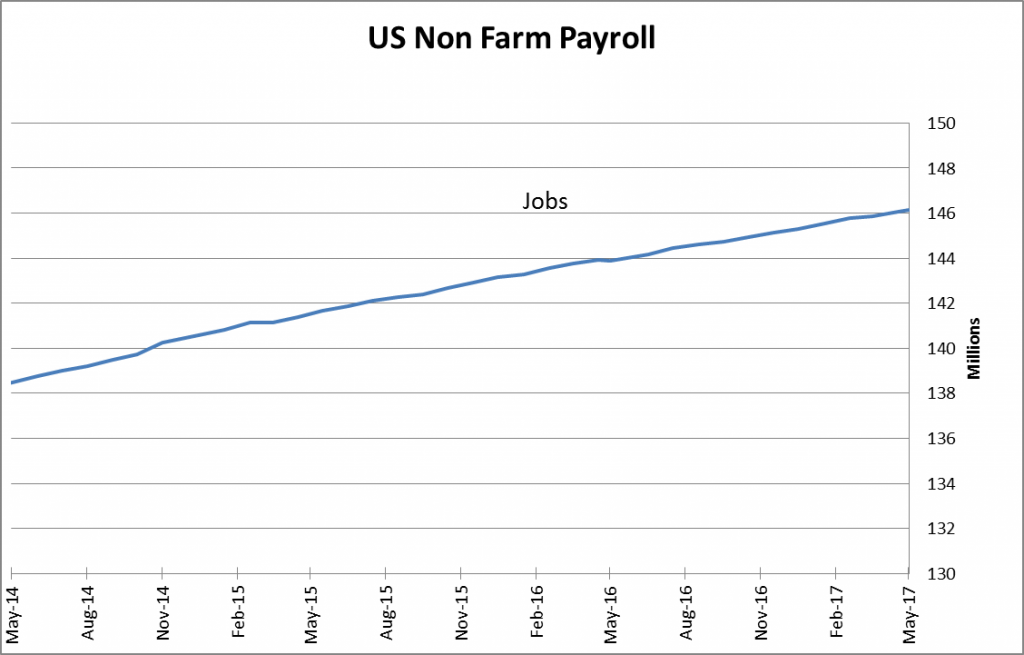 The ISM non-manufacturing index dropped in May by 0.6 to 56.9.  The sub-components were mixed with half rising and half falling.  Business activity and new orders weakened while there was an improvement in the employment sub-index.  The US trade deficit for April widened by US$2.3 billion to US$47.6 billion, as exports decreased by 0.3% and imports rose by 1.0%.

The Canadian economy added a healthy 54,500 jobs in May, with 77,000 full-time positions added while part-time employment dropped by 22,300.  With an increase in the labour force, the unemployment rate rose by 0.1% to 6.6%.  Canada’s trade balance shrank to a deficit of C $370 million in April, from a revised $936 million deficit in March.  The deficit for March was previously reported as C$135 million.  The improved balance resulted from exports (+1.8%) outpacing imports (+0.6%).  Canadian housing starts dropped by nearly 20,000 units in May to an annualized rate of 195,000.  It was the second consecutive monthly decrease, with housing starts at the lowest level in six months.