Last week we offered our initial observations and commentary after processing the historic U.S. election results. Today, we identify some opportunities and shifts that may emerge in financial markets as well as the economy going forward.

To begin with, a Trump presidency is very much a step into the unknown. Stark contrast lies between what is widely deemed “mainstream Republican” and Donald Trump – we simply cannot know what type of President he will be. Oftentimes during campaign season he proved to be a volatile character with vague and inconsistent statements. Yet did his conciliatory acceptance speech and 60 Minutes interview suggest a capability to be statesmanlike and lead in a more measured manner? Were his campaign issues meant to be taken literally, or as opening bids for negotiation? As he attempts to harmonize his polarizing campaign rhetoric with the demands of governing a country, this lack of clarity will be paramount in any conversation about financial markets and the American economy. Regardless of opinions about Hillary Clinton, her well-defined policies offered a degree of certainty – and financial markets like transparency. But such “known unknowns” suggest market volatility will remain elevated in the coming months. 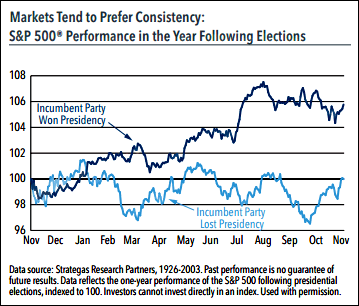 Furthermore, an interesting market trend reveals that when the incumbent party has remained in the White House historically, equities appreciated over the next year.  Conversely, a change in leadership resulted in a more volatile and often sideways market. As is the case with transparency, financial markets also like consistency.

Moving forward, new infrastructure spending, tax cuts and an increased U.S. budget deficit are high atop President-elect Trump’s initial list of priorities. Judging by the rally in equity markets over the past week, his stimulus promises are cautiously welcomed. A higher spending bill would benefit the industrials and materials sectors as well as boost economic growth in the U.S., especially in the short-term.

Moreover, it is important to note the key theme pervading Trump’s campaign: anger. He effectively tapped into an innate sense of frustration felt among a mass segment of the American population – anger at the establishment, anger over stagnant job wages, and anger at a “rigged and corrupt system”. That their messiah never explained in detail how factories and coal mines would reopen did not matter. This anger fundamentally shifts the political landscape, as Trump advocates protectionism and criticizes the pro-trade and pro-globalization stances that have relatively typified the Republican Party. Although Obama told the press, after meeting with Trump for the first time last week, that the President-elect “is committed to strategic partnerships, including NATO”, pundits expect NAFTA-abolishing debates to be initiated, as well as a push towards more protectionist policies. Any economic benefits from a Trump stimulus could be offset by the restrictive effects of protectionism.

Finally, while elections do matter for equity markets and portfolio performance, fundamentals such as asset allocation, direction of earnings, valuation levels and the state of the economy have historically been far more important. Another fact sometimes forgotten during campaign season is that the President must work with his or her congressional staff to enact new legislation. This could be a moderating influence on Trump, even though the GOP has retained majorities in both the House and Senate. For instance, the appointment of RNC Chairman and buttoned-down Wisconsin attorney Reince Priebus as chief of staff might indicate a move closer towards Republican mainstream.

Nevertheless, how Trump plans to make America great again is the big question heading into his presidency. And while Obama pointed out in his election night address that “no matter what happens, the sun will rise in the morning”, daily temperature forecasting will become more challenging in the coming months.

NEWS FOR THE FIRST HALF OF OCTOBER 2016 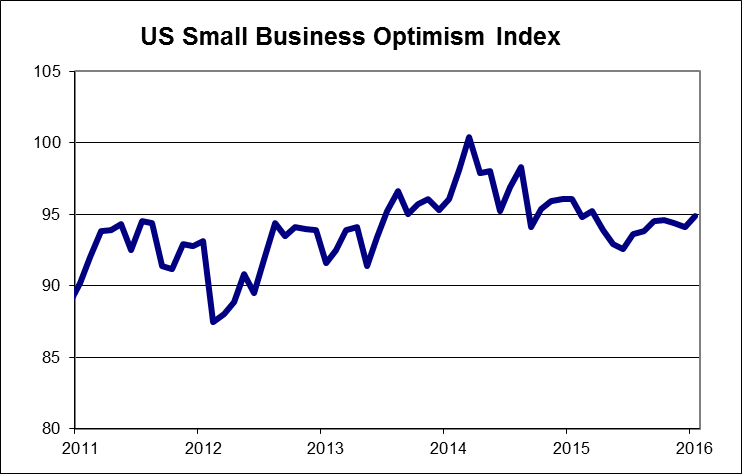 The NFIB Small Business Confidence Index for October rose by 0.8 points to 94.9.  The components were mixed, with plans to increase inventories moving higher, while expectations for the economy were lower. 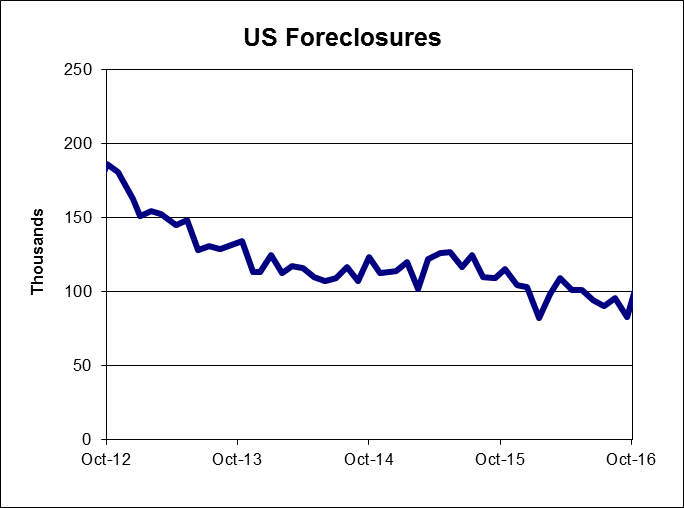 The latest Realty Trac foreclosure report showed foreclosure filings were reported on 105,481 properties in October, up 27% from the previous month, and down 8% from a year ago. 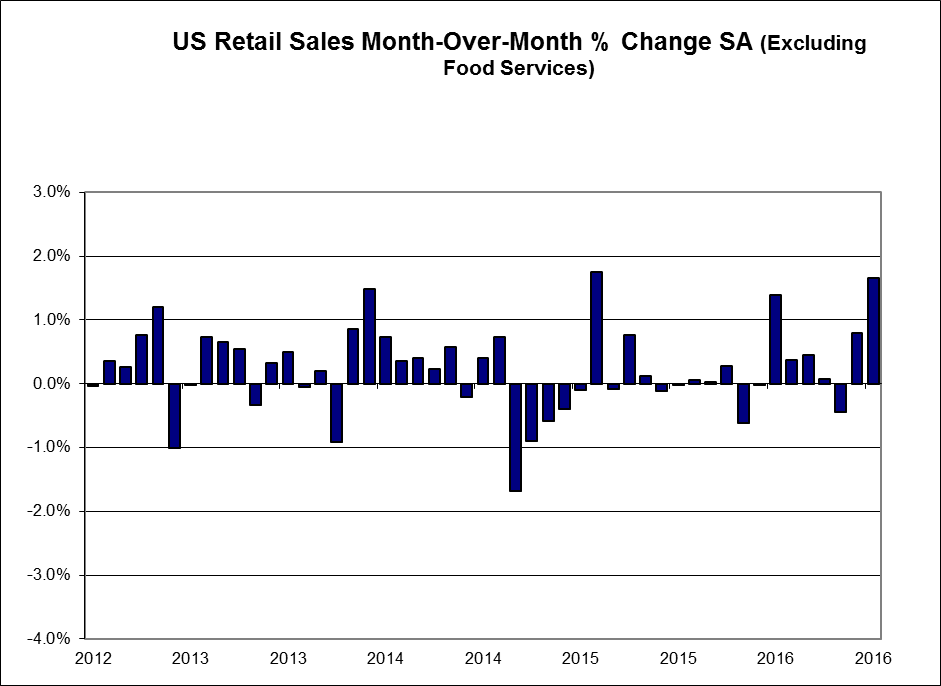 US retail sales had the best two-month stretch since early 2014, with October retail sales rising 0.8% following a revised 1.0% increase for September. 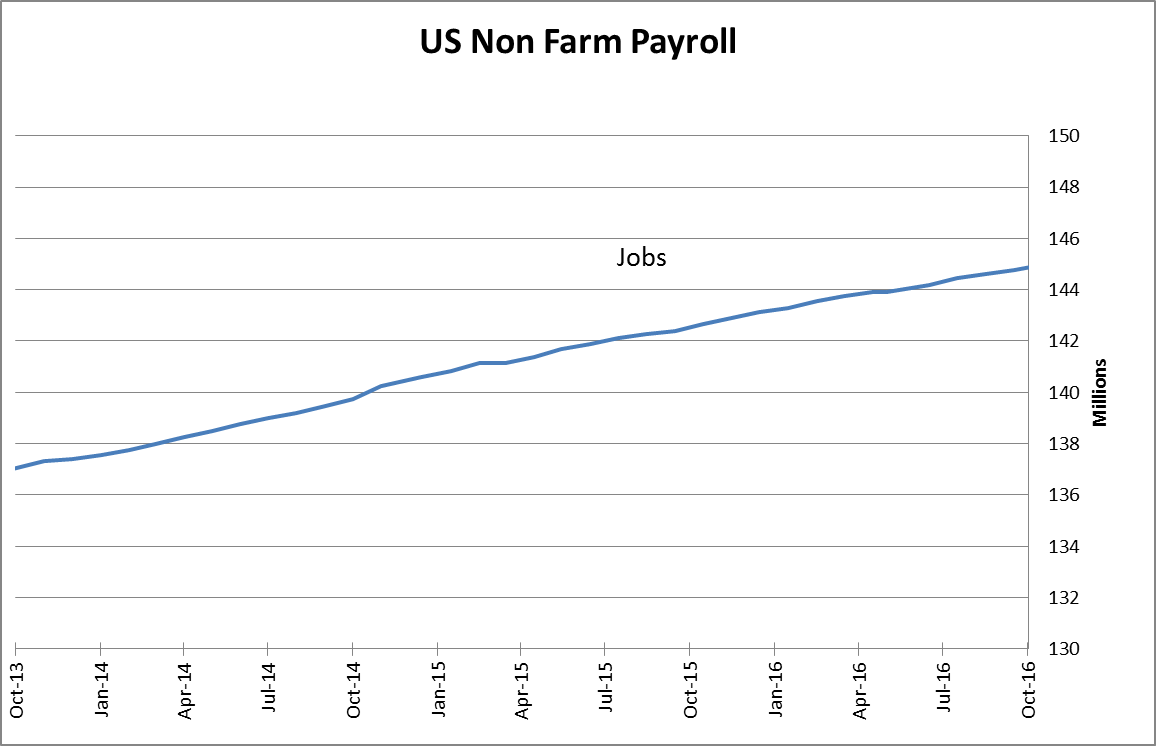 The ISM non-manufacturing index for October declined to 54.8 from 57.1 in September. Business activity, new orders and employment accounted for the bulk of the decrease.  The US trade deficit for September narrowed to US$36.4 billion from US$40.5 billion in August.  Exports rose by 0.5%, while imports fell by 1.3%.

Canadian employment grew by 44,000 jobs in October, with the unemployment rate holding steady at 7.0%.  However, the gains were all in part-time employment as 67,000 part-time jobs were added while 23,000 full-time jobs were lost.   Canada’s trade deficit for September widened to C$4.1 billion compared to C$2.0 billion in August.  Imports surged by 4.7%, due to a one-time import of equipment for an offshore oil project, while exports rose by 0.1%.  Canadian housing starts declined in October to a seasonally adjusted annual rate of 192,900 units from 219,400 in September. The Teranet/National Bank home price index rose by 0.3% in October.  Home prices in the markets surveyed were 11.8% higher compared to the same time a year ago.