Since the Great Recession, investors have been on the lookout for indicators that could spell the end of the bull market. The third quarter of 2019 was rife with market-moving headlines as well as signals of a slowing global economy. Ongoing trade tensions between the U.S. and China continued dominating investor attention, with sentiment shifting each time the potential for a resolution was hinted at, as well as every time the Trump administration suggested the possibility of unfavourable measures.

President Trump’s August decision to delay further tariff implementation demonstrates he is not as impervious to the market impact of trade policy as originally anticipated. However this action should not be interpreted as a sign that a resolution is nearing, given the many false starts that have preceded a renewal of friction over the last year.

Adding to global economic uncertainities this quarter were drone attacks on Saudi Arabian energy facilities, a presidential impeachment inquiry lead by the U.S. House of Representatives, a messy Brexit scenario, along with yield curve inversions in the U.S. and U.K., to name a few. Together with economic data releases, central bank actions kept investors further on their toes as they considered what each announcement meant for global economic growth.

In Canada and the U.S., the economic backdrop remained reasonably constructive. The U.S. has remained a particular source of strength, displaying resilience to geopolitical issues thus far. With the Sino-U.S. trade conflict reaching one year of age, the U.S. consumer sector, labour market and wage growth remain robust. This is primarily due to the country’s relatively self-sufficient landscape – among all countries in the developed world, the U.S. economy relies on trade the least.

Although an outright recession does not appear imminent in North America, a number of weakening economic data points have begun impacting global consumer and business sentiment. With inflation no longer a concern as we move into the last three months of the year, the focus is squarely on prospects for continued economic growth.  As the business cycle approaches its eleventh year of expansion, continued escalation/de-escalation of economic concerns will likely persist until a resolution to the U.S.-China trade dispute is achieved.

For those who thought the bond market was boring, the returns generated so far this year may have changed their views.  While returns were more muted in the third quarter, the Canadian and U.S. bond markets still posted solid positive returns, despite the historically low level of interest rates.  During the quarter, the U.S. Federal Reserve lowered interest rates by a total of 50 bps: 25 bps in July and another 25 bps in September.  The Bank of Canada, on the other hand, kept interest rates unchanged, noting that the current level of monetary policy stimulus remains appropriate given the current economic situation in Canada.  The Bank did, however, cite the impact of the current U.S.-China trade conflict on world trade and business investment, in that it is having a more pronounced impact on global economic momentum than previously anticipated.

Yields declined further in both Canada and the U.S. over the quarter, but the downward movement was not in a straight line.  In fact, short-term interest rates in Canada ended the quarter higher, while mid- and long-term rates ended lower, further inverting the yield curve.  In the U.S., interest rates fell across the yield curve, but more so at the long end.  The Fed’s interest rate cuts provided the market with confirmation that it will indeed act to support the U.S. economy.  Aside from central bank action, bond market performance during the quarter was driven by the ongoing trade conflict between the U.S. and China, with investor sentiment changing every time there was a headline suggesting the possibility of resolution to the trade disputes, as well as every time President Trump suggested the possibility of introducing actions that China would consider unfavourable. The corporate bond market also continued to perform well over the quarter, with credit spreads continuing to tighten at the short and mid parts of the curve.  For the quarter, the Canadian bond market (FTSE Canada Universe Bond Index) returned 1.2%, with the long-term bond market up 2.5% and the short-term bond market increasing 0.3%.  Once again, the top performing sub-sector was long bonds, specifically long federal government bonds.

Given historically low interest rates and the risks that abound, we continue to believe that active management is even more important in adding value and preserving capital, as active managers are better positioned to identify and access attractive opportunities, including non-traditional strategies, as well as to avoid high-risk sectors in the fixed income market.

Despite ongoing uncertainties regarding global economic growth, equity markets continued on their upward ascent in the third quarter – albeit not in a straight line. August saw stock markets marching to the beat of trade war drums, with equities coming under pressure as investors huddled in bonds and other safe haven assets. Then, September’s trade optimism and eurozone stimulus supported positive returns, with some equity markets even approaching all-time highs.

Canada has continued to be one of the top-performing equity markets in 2019, advancing 19.1% year-to-date. The U.S. has been a close second, up 16.9% in the first nine months of the year. International equities have been posting similarly positive performances, with EAFE (Europe, Australia, Far East) and emerging markets appreciating a respective 9.9% and 3.0% year-to-date.

The ongoing lack of resolution to trade policy, together with President Trump’s erratic on-again, off-again approach, remain key risks for equity markets going forward, given that their strong performance in recent months has been fueled by P/E expansion rather than corporate earnings growth. Without a rebound in corporate profits, it is difficult to justify current equity valuations. That being said, falling interest rates and modest inflationary pressures could lend support to earnings growth – and ultimately the bullish case for equities – over the next year.

We continue to believe that the penalty for prematurely exiting equities is too high, and that the rally in risk assets is not over for the cycle, despite being its latter stages. We have also observed a growing disparity between the valuations of growth and value stocks, which has served as a reminder that there are segments of the equity market offering interesting opportunities.

Nevertheless, as equity investors we find ourselves in a precarious position, with the market outlook tied this closely to Sino-U.S. trade relationships. Stocks are likely to move in a volatile, sideways pattern until clarity on trade policy is achieved. Although monetary policymakers can step in to help extend the longest bull market in history, interest rates cannot fundamentally solve the problem.

As we have argued before, while an eventual downturn is inevitable, we anticipate it to be shallow. We do not envisage a repeat of 2008 or even 2000, which were driven by collapse and/or asset bubbles.

While optimism has returned to financial markets thanks to central bankers, a variety of risks remain, and volatility will continue to be present in both bond and equity markets.  No one knows how the rest of the year will play out, but overall, the investment environment remains positive with low interest rates and modest inflation.  Corporate earnings remain supported by the abundance of cheap credit, but the impact of trade tariffs and trade tensions is beginning to affect profit growth.

While mindful of the risks, our portfolios remain strategically positioned to favour equities within the context of each client’s target asset mix as we believe the asset class provides long-term investors with superior returns.  However, our underlying investment managers are increasingly favouring companies that are best positioned to deal with the risks.  We also continue to seek out non-traditional investments that have low correlations to public bond and equity markets to enhance the risk-adjusted returns for our client portfolios. 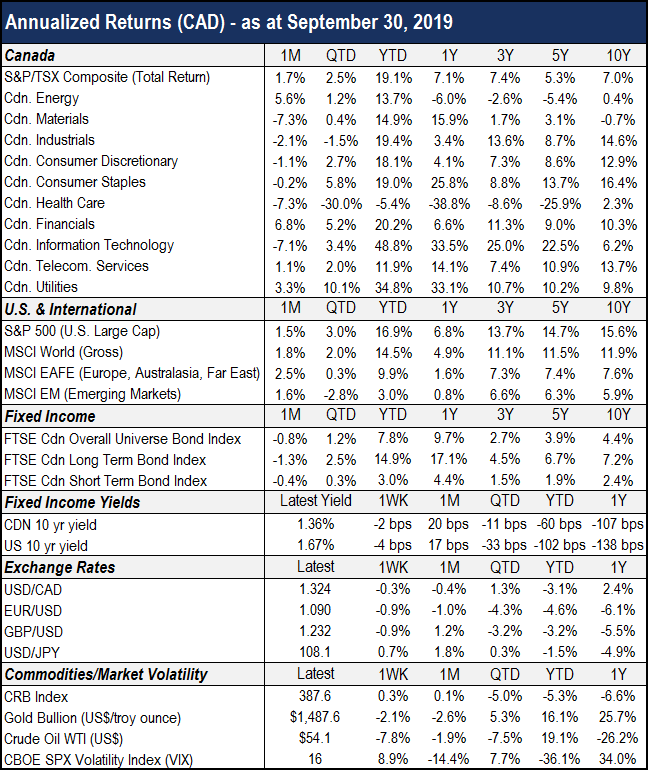