Next month marks one year since Britain’s historical Brexit vote. At this time last year, the vast majority of polls and news outlets were predicting that the Remain camp would prevail. Fast-forward to June, and the UK’s decision to exit the EU as well as plunge into the political unknown sent shockwaves through global financial markets – the British Pound dropping to a nadir not seen since 1985. Investors around the world wondered – would other member countries follow suit? Would Italeave, Oustria, Departugal or Czechout soon enter our daily vernacular? And how would Europe’s risk profile be impacted?

Another fast-forward to 2017, and with President Trump having moved into the White House, many wondered if Marine Le Pen would be the next populist to pull off an upset. Not this time. In fact, Emmanuel Macron’s recent victory of the French presidency is arguably a curb on the global anti-establishment tide. The staunchly pro-EU candidate’s win was unequivocal – clinching 66% of the vote versus Le Pen’s 34%. And the same is true for several populists elsewhere. In December, far-rightist Norbert Hofer lost the Austrian presidency to pro-EU candidate Alexander Van der Bellen. In March, the Dutch electorate chose centrist Mark Rutte over nationalist Geert Wilders. In April, Finland’s municipal elections saw the Finns Party vote total slash in half.  Next on the docket is Germany’s federal election in September, where Chancellor Angela Merkel is projected to crush the Alternative for Germany party. One setback for these populist movements is that the problems that galvanized their support are subsiding. Euro zone economies are recovering, business confidence is rising and unemployment is improving. Even Brexit fears have abated for many in the EU. The easing of such crises has made it tougher for these parties to maintain compelling ideologies. 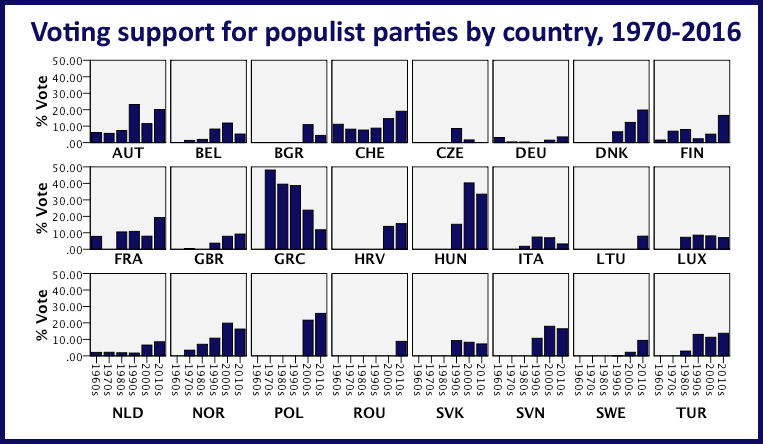 Yet a closer look at the numbers reveals populism is far from fading. Le Pen’s 35% showing, the strongest in the National Front party’s 45-year history, was double the level her father Jean-Marie Le Pen achieved in 2002 – implying that her campaign against the EU, immigration and globalization resonated for many voters. Another concern was the voter turnout itself – at 75% it was the lowest for a French electorate since 1969. Spoiled ballots were also a record 11%. Furthermore, opinion polls indicate that 45% of Macron’s support emanated from voters who did not necessarily back him but who hoped to block Le Pen. Much will therefore ride on June’s parliamentary elections, where France will decide whether to give their new President the power to legislate. Without a majority in the 577-seat National Assembly, Macron will have a tougher time implementing his agenda – unlike in the US, French Presidents do not rule by executive decree. A great deal could happen between now and then of course, but to envision how Macron would govern with a National Assembly polarized into gridlock is difficult.  And lest we forget the Euro zone’s third greatest economy. An Italian election is upon us next year and opposition party Five Star Movement, who fancies a euro referendum, has a large lead in the polls.

So what does this mean for financial markets and what is the message to investors? We recently pondered this in a meeting with our longstanding partners at Jarislowsly Fraser Ltd. Our esteemed manager pointed out that while the likelihood of populism attracting many more followers is low, it has made major inroads and will be a permanent fixture on the political scene over years to come. Nevertheless, while geopolitical risk can indeed influence financial markets – earnings, job prospects and inflation will always matter most. 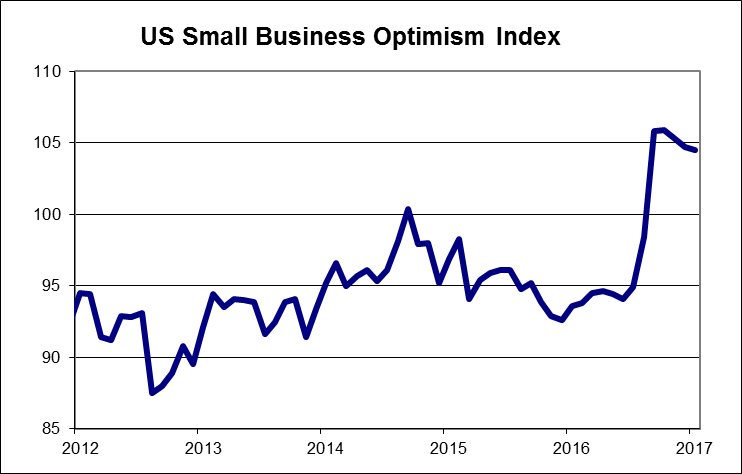 The NFIB Small Business Confidence Index fell by 0.2 points in April to 104.5  The index has now decreased three months in a row, but optimism has remained at the top end of the range of historical highs since late last year. 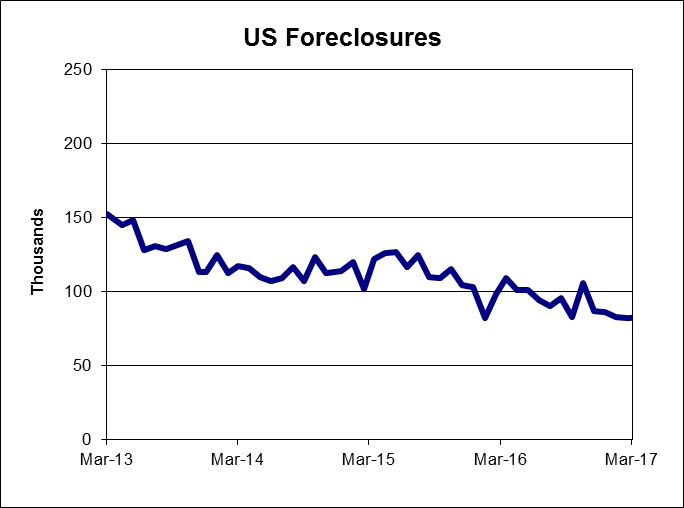 The Realty Trac foreclosure report for April showed foreclosure filings were reported on 77,049 properties in April, down 7% from March and 23% lower than a year ago to the lowest level since November 2005. 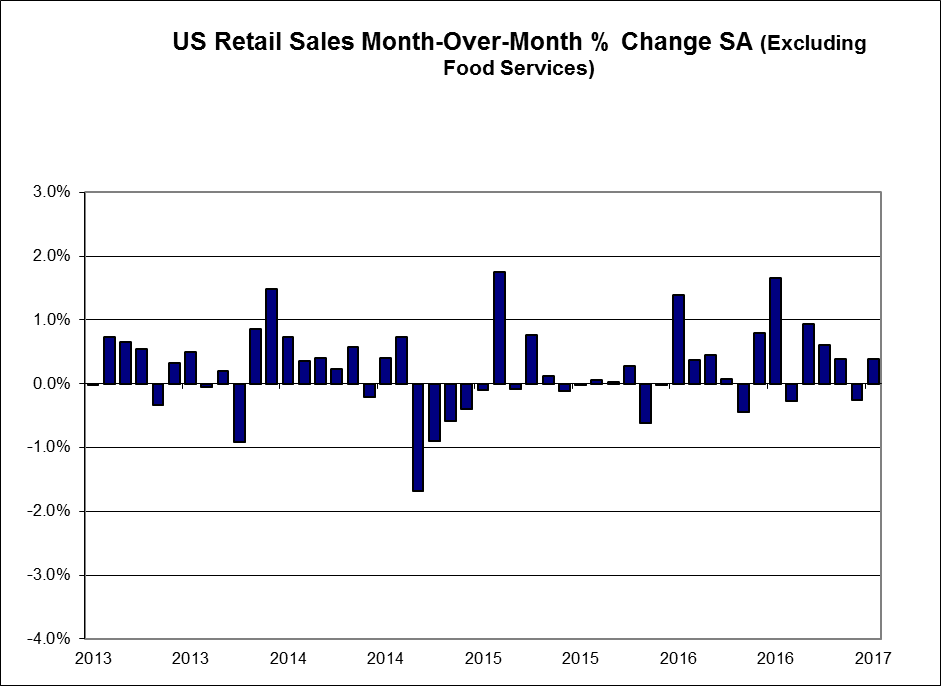 US retail sales rose by 0.4% in April, short of expectations for a 0.6% rise.  March retail sales were revised upwards from a 0.2% decline to a 0.1% increase.  April’s sales were buoyed by increases in autos, building materials and discretionary spending. 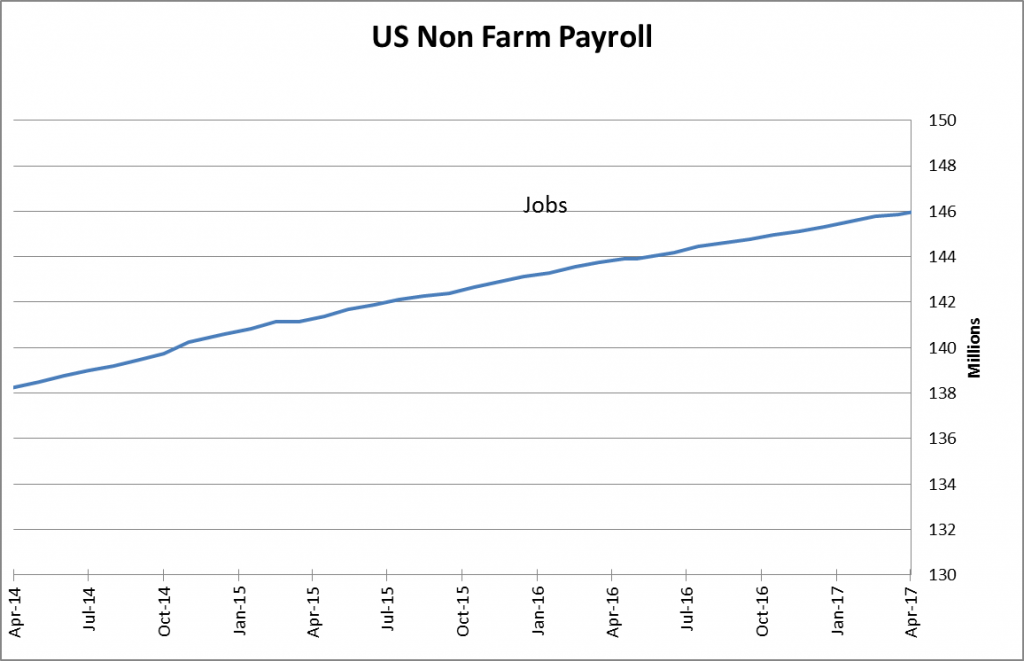 The ISM non-manufacturing index rose in April by 2.3 to 57.5. Gains were broad-based, led by increases in new orders and business activity.  The US trade deficit for March narrowed to US$43.7 billion from US$43.8 billion in February, with marginal decreases in both exports and imports.

Canadian employment growth slowed in April as the economy created 3,200 jobs, with the unemployment rate dipping by 0.2% to 6.5%, as 45,500 people left the labour force  The net gain came from part-time employment.  Canada’s trade deficit for March narrowed to C$135 million, as exports rose to a record high.  This follows a C$1.1 billion deficit in February.  Exports rose by 3.8% while imports increased by 1.7%.  Canadian housing starts declined in April to a seasonally adjusted annual rate of 214,000 compared to 252,000 in March.  The decline was expected as March housing starts were unexpectedly strong. Even with this month’s decline, April’s housing starts are above the six-month moving average.  The Teranet/National Bank home price index rose by 1.2% in April.  Home prices in the markets surveyed were 13.4% higher compared to the same time a year ago, with Toronto leading the way with a 26% year-over-year increase.