Canadian markets, alongside their global counterparts, retreated in the first half of the month, as tensions on the Korean Peninsula mounted to the point where markets could no longer ignore them. Domestically, while housing starts trended upward in the year’s first half, recent headwinds in the form of rising borrowing costs and macro-prudential measures introduced the possibility of adverse effects into the mix. South of the border, financial markets were also largely driven by geopolitics, as tensions heightened on the back of escalated rhetoric between the U.S. and North Korea. Inflation remained weak in the U.S., with both the PPI and CPI surprising on the downside, increasing the likelihood of the Fed downgrading inflation projections at its September meeting. At the same time, U.S. labour market progress continued at a resilient pace – with unemployment at 4.3%, wage growth at 2.5% y/y and the trade-weighted dollar down 8% from its December peak. Inflation was far more robust in the Eurozone however, with strength evident in Germany and Spain, and price gains in France and Italy not as apparent. 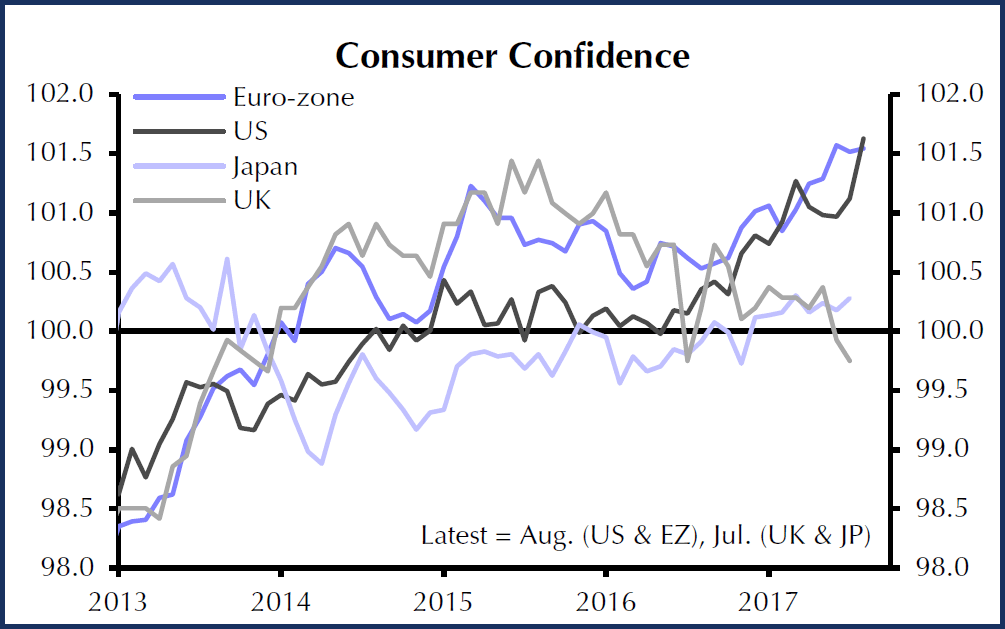 During the second half of the month, Canadian trade data confirmed that retail sales grew 0.5% m/m in June, marking the sixth consecutive increase in volume terms.  This data was the last piece of evidence needed to confirm that household consumption contributed strongly to economic growth in the second quarter, owing largely to a solid performance for consumer durables. NAFTA negotiations progressed behind closed doors, with President Trump’s tough bargaining stance on display as he repeated his campaign pledge to revoke the agreement. While his remarks initially caused a slight sell-off of the Canadian dollar mid-month, this quickly reversed following the release of June’s retail trade data. In the U.S., markets focused on Chair Yellen’s speech at the Jackson Hole Economic Policy Symposium. Somewhat surprisingly, her commentary did not involve monetary policy, implying that the Fed is secure with the market’s policy expectations – essentially that balance sheet normalization will begin in September and interest rates will likely rise in December. Internationally, Eurozone inflation surprised on the upside in August, the preliminary reading coming in at 1.5%. This comes just as the European Central Bank prepares to debate whether to tighten monetary policy after two-and-a half years of unprecedented stimulus. Consumer confidence in most advanced economies was also remarkably robust this month, with tensions due to natural disasters, geopolitical threats, ongoing White House turmoil and future monetary policy decisions shifting to the background. Such resilience is a testament to how much global economic and financial conditions have improved in recent years.

With second-quarter economic growth now all but confirmed, the main questions domestically are clear. How long can Canadian households sustain their spending levels? And what does this mean for future economic activity? The average Canadian household is quite indebted, mainly due to mortgage growth from the housing market’s upcycle in a once ultra-low interest rate environment. Furthermore, consumer spending has been fueled by consumer durables purchases – primarily big-ticket items such as cars, furniture and appliances. It is natural to question whether the pace of consumption growth can prevail against the headwinds of lower home prices and a rising-rate environment. In the U.S., the coming weeks may see markets on the edge of their seats awaiting several events to unfold – namely U.S. tax reform plans, a potential shutdown over the U.S. government’s need to raise the debt ceiling, NAFTA negotiations, and key Fed meetings. While Hurricane Harvey is a national tragedy, economic impact should be minimal. There may be a small uptick in initial jobless claims next month, as well as modestly adverse effects on employment, industrial production and retail sales, all of which are likely to reverse in the months following. 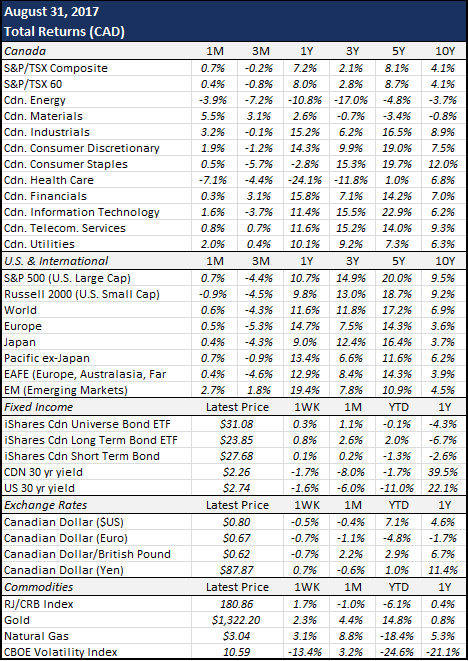 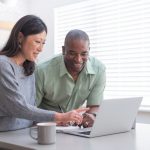 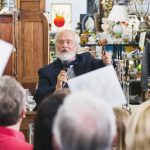 Investing in collectibles – what you need to know

The appeal of investing in unconventional assets Just before Christmas, countles... 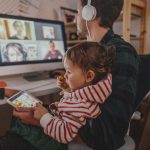