Is this party over?  Behaviour across global equity and bond markets throughout September certainly suggests that market participants are beginning to feel that the U.S. equity party may be over and it’s time to go home, back to our “conventional” lives.  It might also suggest that the trade tariff “tit for tats” between the U.S. and China, as well as between the U.S. and Canada, are unlikely to reach a positive resolution for the most important stakeholder, the consumer, with the ultimate impact on corporate earnings and economic growth being negative.  Regardless of the reason, most market participants would agree that the financial conditions, namely accommodative monetary policies that have supported strong economic and corporate earnings growth and rising multiples globally are now receding. 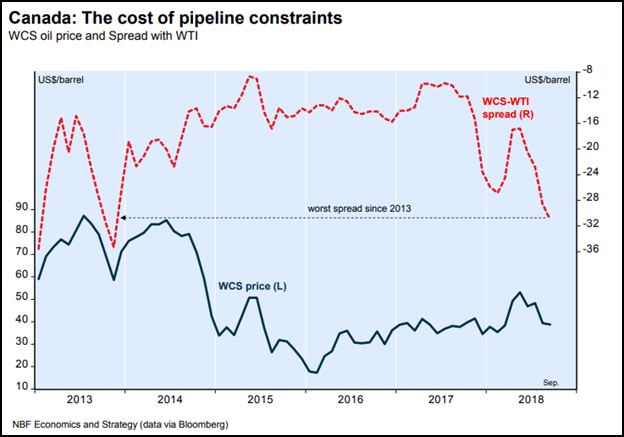 Economic data released throughout the month in both Canada and the U.S. remained reasonably positive and supportive of continued interest rate normalization by both the Bank of Canada and the Federal Reserve.  While the Bank of Canada kept interest rates on hold in early September, most anticipate an increase at their next meeting on October 24, and more so now given that Canada and the U.S. finally reached a deal on NAFTA.  In late-September, the Fed increased the federal funds rate for a third time this year and re-iterated their outlook for continued gradual rate hikes in 2019.  While market participants were not surprised by the central bank decisions, the bond market’s performance throughout the month was less-than-obvious.  In both Canada and U.S., as well as across many developed bond markets, 10-year yields increased significantly, up 20 bps over the month, seemingly driven by a combination of new bond supply in the U.S., and anticipated statements by the Fed and commentary from Chairman Powell.   Across the rest of the yield curve, rates also increased by a similar magnitude, with many of the same factors that drove the longer end of the yield curve also impacting bonds cross the maturity spectrum.  For the month, the bond market recorded its worst monthly performance this year, with the FTSE Canada Overall Universe down 1.0%.

Equity markets fared slightly better than the bond market in September, with the U.S. equity market perhaps beginning to show signs of aging.  While the U.S. market continued its upward trend in USD, the monthly return was more modest than that seen in recent months with large variations across sectors.  For Canadian investors, however, the 0.9% appreciation in the loonie against the USD resulted in the S&P 500 declining 0.3% in CAD.  In Canada, the favourable underlying economic and corporate fundamentals were overshadowed by the lack of progress in the NAFTA negotiations (until the ultimate deal on September 30), with the S&P/TSX Composite ending the month down 0.9%.  Beyond North America, equity market returns were a mixed bag with Japan plus several European countries posting robust returns in local currency terms, while the rest of the EAFE region and emerging markets in aggregate remained in negative territory.   Overall, the MSCI EAFE (gross) was flat in CAD, while the MSCI EM (gross) fell 1.4% in CAD.

In other financial news, currency markets were a bit of a mixed bag in September with the upward trend in the USD losing a bit of steam. One area of continued strength was against the Japanese Yen, where the USD moved up 2.4%.  The general weakening in the USD, particularly against the loonie, had a negative overall impact on global equity market returns for Canadian investors.  One of the bright spots in financial markets was the price of oil (WTI in USD) up almost 5% although Canadian energy companies did not realize the benefits as pipeline constraints resulted in rising inventories and lower prices for Western Canadian Select (WCS), with the spread between WCS and WTI widening to the highest since 2013. 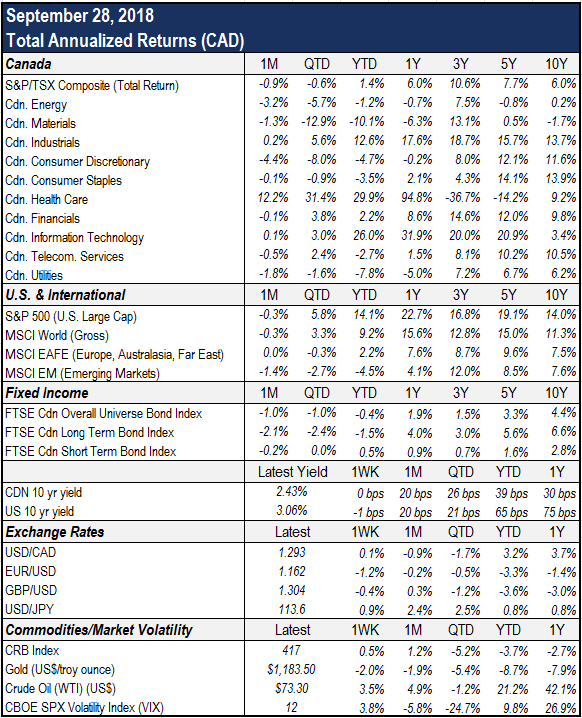