There was once again no shortage of market-moving headlines in September, something we suspect that most market participants have become accustomed to since President Trump took office in January 2017.  The month remained dominated by the ongoing trade conflict between the U.S. and China, with investor sentiment changing every time there was a headline suggesting the possibility of resolution to the trade disputes, as well as every time President Trump suggested the possibility of introducing measures that China would consider unfavourable.  Adding to the ongoing uncertainty regarding global economic growth were the drone attacks on Saudi Arabian energy facilities and tankers, as well as the call by Democrat leaders in the U.S. to begin impeachment proceedings against President Trump.  And last but certainly not least, central bank action and economic data releases continued to keep markets on their toes as they considered what each announcement and data point implied for future global economic growth and corporate earnings.

On the economic front, the tone remained reasonably constructive in both the U.S. and Canada, although there appears to be an increasing number of weaker economic data points driven by the continued uncertainty around the future economic climate which is already impacting consumer and business sentiment.  Inflation is clearly no longer a concern for investors, with the focus squarely on global economic growth.  An outright recession in either country does not appear imminent but is very much dependent on a resolution to the U.S.-China trade disputes.

In bond markets, official central bank announcements in September had a more muted impact on interest rate movements and returns than in the past as the Federal Reserve’s decision to cut interest rates by 25 bps and the Bank of Canada’s decision to keep interest rates unchanged were largely expected by the market.  The most significant driver of interest rate movements was the perceived easing of trade tensions in mid-September, which drove interest rates up sharply across the entire yield curve as it suggested a reduced need for further monetary easing.  Corporate bonds did not fare as badly as government bonds, as credit spreads tightened on renewed optimism regarding global economic growth.  For the month, the Canadian bond market gave back some of its strong returns in August and finished down 0.8%.  Long-term bonds underperformed their short-term counterparts, with each segment declining 1.3% and 0.4%, respectively.

Despite ongoing uncertainty regarding global economic growth, equity markets continued to march higher, albeit not in a straight line.  Most developed and emerging equity markets posted positive returns, largely driven by trade optimism, as well as eurozone stimulus.  Some markets even came close to their all-time highs. The lack of resolution to trade conflicts, with all their ramifications, remains the key risk for equity markets given that strong performance in recent months has been fueled by P/E expansion rather than earnings growth.  Without positive news to support upward revisions to corporate earnings growth, it is difficult to justify current valuations. For the month, the Canadian and U.S. (S&P 500) stock markets posted returns of 1.7% and 1.5% (CAD), respectively, while overseas, developed (MSCI EAFE) and emerging (MSCI EM) markets each returned 2.5% and 1.6%.

In an atmosphere of shaky sentiment and heightened uncertainty, how does one invest? When it comes to client portfolios, we have always preferred to hold a diversified yet selective set of fundamentally higher-quality companies and investments. We believe this philosophy will continue to serve our clients well, though we remain vigilant of current risks. Furthermore, we continue to de-risk portfolios for clients with high income needs and/or shorter time horizons. What remains hardest to predict is whether the current market uncertainty will get resolved and if not, how significant will be the impact on global economic growth and corporate earnings. As we all know, financial markets have never gone up in a straight line. Looking back to December 2018, had a Canadian investor pulled out of the market or hesitated to invest because they were awaiting the proverbial bottom, they would have lost out on the high double digit returns that we have witnessed in Canada and the U.S. year-to-date. Helping our clients stay tethered to the core tenets of their investment policies remains a critical component of dedicating ourselves to their success. 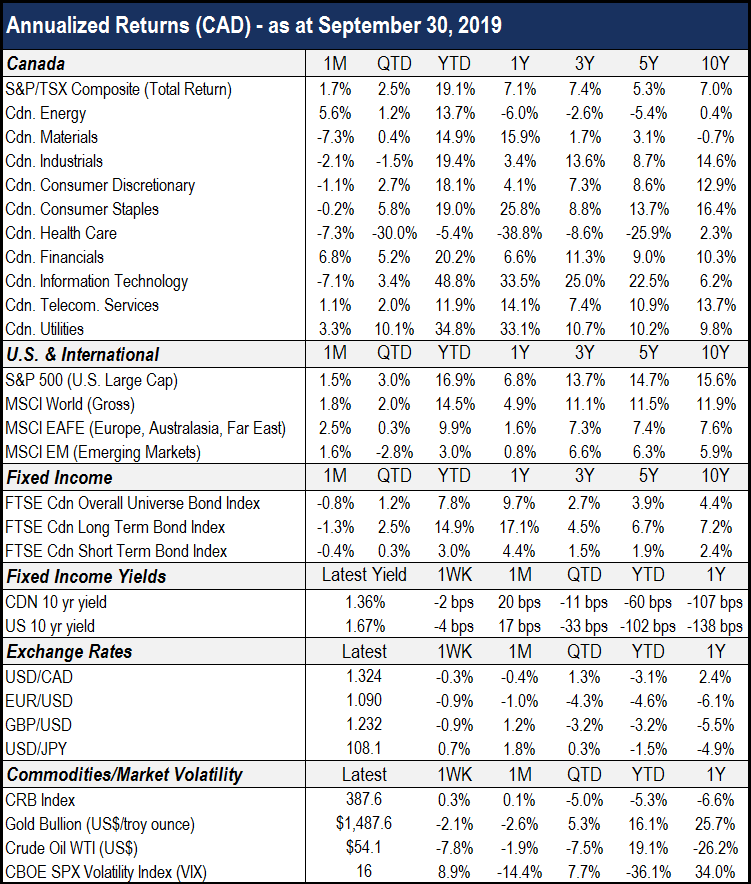