Around Labour Day, investors were relatively sanguine and volatility was relatively low. Fast-forward two months, and investors have been in sell-off mode. What has them so unnerved? The laundry list includes slower global growth, mounting inflation, rising bond yields, the path of interest rates, peaking corporate earnings, and of course, trade tensions and tariff-related cost pressures. There is no denying that October’s market conditions reflect the later stages of an economic growth cycle. While these issues are real, market pundits believe that sentiment has been worse than reality.

As widely expected, the Bank of Canada raised interest rates at the end of the month, citing that the economy is operating close to potential and that trade-related risks have reduced courtesy of NAFTA 2.0. The central bank upgraded its Canadian growth forecast to 2.1% for 2018, in part due to better-than-expected Q3 data. The Bank was also encouraged by moderating credit growth and household vulnerabilities. At this time, the BoC and U.S. Fed are more concerned with the possibility of economic overheating than they are with slower growth. While the month’s final days saw bond markets advance as investors, seeking refuge from volatile equity markets, flocked to the safety of fixed income instruments, it was not enough to push performance into positive territory. The Canadian bond market (FTSE TMX Canada Bond Universe) lost 0.6% in October.

From New York to Hong King, stock markets were knocked down by a gust of fear last month. While losses were broad-based across most sectors, the Nasdaq bore the brunt of the damage, as investors fled from former tech darlings such as Amazon and Netflix, who each lost approximately one fifth of value. The Halloween tailwind that markets enjoyed in the month’s final days was not enough to reverse course. Canadian stocks (as measured by the TSX) and U.S. stocks (S&P 500) returned -6.3% and -5.4%, respectively. The MSCI EAFE Index, which represents developed markets outside North America, lost 6.5%. Emerging Markets, which have especially been impacted by trade uncertainties, were down 7.2%. Oil markets experienced decline as well, owing to the bearish combination of rising supply and concerns over economic growth.

The good news in all this is that stock markets appear set to start November off with a bang, with investors happily putting the month of October in the rear-view mirror. And believe it or not, economic and corporate fundamentals remain strong. While earnings results were not enough to offset investor fears last month, companies are still on trend to be up by over 20%. While caution and risk management are warranted at this mature stage in the business cycle, the recent weakness has not been pervasive enough to signal major market problems or an imminent end to cyclical expansion.

So how is an investor to cope? We realize that the “do nothing” approach can be uncomfortable, yet the advice remains more vital than ever. The scenario is comparable to turbulence on a flight – unpleasant, but historically not hazardous to one’s (financial) health. As with flight turbulence, make efforts not to sweat (or at least withstand) the ups and downs. We firmly believe in diversification’s ability to offer a smoother ride. Attempting to time market entrances and exits has been shown, over and over again, to be an ineffective strategy. Furthermore, risk is an important component of generating long-term growth, and the risk-return trade-off has historically proven its worth. For instance, since 1928, the U.S. stock market (as measured by the S&P 500) has posted an annual return of 9.5%. The bottom line is that periods of market decline, while uncomfortable, are a common and necessary part of investing. With the environment for financial assets being more uncertain, we believe that our portfolios of carefully selected, high-quality financial assets – that we continually monitor, assess and rebalance as necessary – should provide the necessary ballast for the potential turbulence ahead. 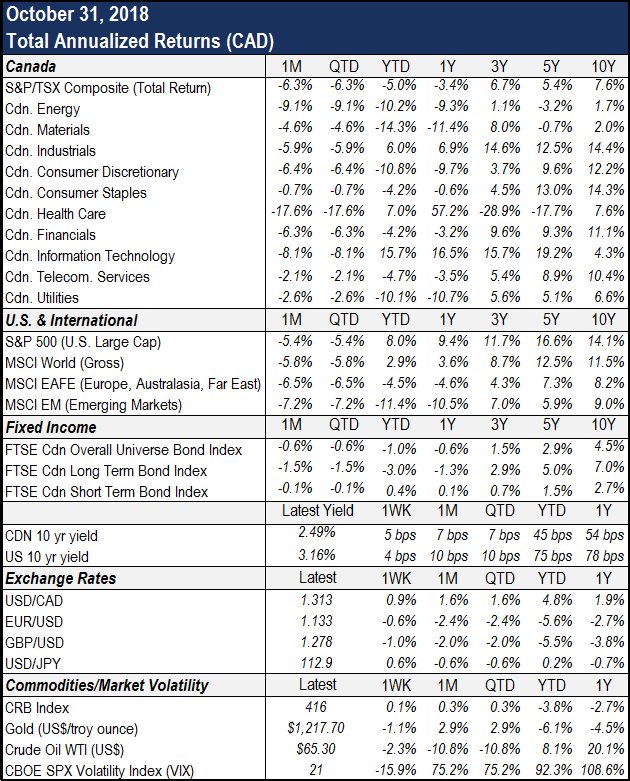