The driving force behind financial market performance in June remained trade headlines as well as speculation over the outcome of trade talks between the U.S. and other countries, namely China. However, it should be noted that the impact of ongoing trade conflicts has not been isolated to financial markets only. The effect of trade tariffs imposed to date, combined with ongoing uncertainties, has begun reflecting in economic data and corporate earnings, which is clearly on the Federal Reserve’s radar as a significant risk to be managed.  Financial market performance in June suggests that investors are expecting central bank action (i.e. interest rate cuts) to dampen any negative impact to the economy and corporate earnings that the current trade situation may cause.

Up until recently, most market pundits anticipated that the direct effect of recent tariff threats to global GDP would be small, since a degree of export substitution would occur with other countries.  However, while discussions between the U.S. and China at the G-20 summit were positive, we’ve begun to see trade tensions expand between the U.S. and Europe, which would have a more significant negative impact on global economic growth.   Unfortunately, when more countries enter trade wars, there are no winners. Instead, every country and its citizens end up worse off.  Tariffs imposed by the U.S. on imports from China have already begun showing up in higher prices for U.S. consumers. Some companies are beginning to discuss layoffs as the higher prices result in reduced demand for their goods.  U.S.-China tensions have also begun impacting Canada, as China has cut Canadian canola and pork exports, most likely as retaliation for the situation with Huawei.  These are small events and the impact on the overall economy may not be significant, but it certainly doesn’t help overall consumer and business confidence.

In fixed income news, the U.S. Fed left interest rates unchanged at its June meeting, but the wording of the announcement suggested they would lower interest rates if warranted.  Both bond and equity investors reacted favourably, with riskier assets benefitting the most from the support of the central bank.  In Canada, however, the BoC did not provide the same level of encouragement to financial market participants as inflation remains more robust, and the economy has yet to show signs of requiring more stimulative monetary conditions.  Despite the less favourable backdrop for Canadian fixed income investors compared to their U.S. counterparts, the bond market still posted positive returns, with long-term corporate bonds outperforming other segments of the market.  The Canadian bond market returned 0.9% in June, with the long-term index advancing 2.1% and the short-term index up a more modest 0.1%.

As expected, global equity markets reacted favourably when the Fed stated it would act as required to sustain economic growth.  Barring Canada, most major central banks have also suggested they are more inclined towards further easing given the increasingly challenged backdrop for global economic growth.  In local currency terms, most major markets recorded exceptionally strong returns in June, with higher stock prices driven by expanding multiples as opposed to higher earnings growth expectations.  In fact, earnings revisions in the U.S. have been mostly declining, particularly amongst value stocks.  In CAD terms, however, equity market returns were dampened by the stronger loonie. The CAD was up 3.3% primarily on the narrowing spreads between Canadian and U.S. interest rates.  For the month, the Canadian equity market returned 2.5%, with materials and consumer discretionary stocks driving the returns.  The U.S. equity market (S&P 500 in CAD) was up 3.5%, with materials (specifically gold) leading the way. International and emerging stock markets posted returns of 2.4% and 2.8%, respectively.

Every day, we face the question of where will markets go from here given the various risks facing the world.  We remain constructive on the long-term prospects for equities but recognize that focusing on quality and valuation is increasingly important at this stage of the cycle.  It would be arrogant of us to believe that we can accurately predict the future path of equity and bond markets.  Instead, we favour following a decision-making process that helps us avoid mistakes and minimize risk. We remain focused on investing in the right asset mix for each client to achieve their long-term goals, as well as selecting the optimal strategies and solutions within each asset class. Helping our clients stay tethered to the core tenets of their investment policies is also a critical component of dedicating ourselves to their long-term success. 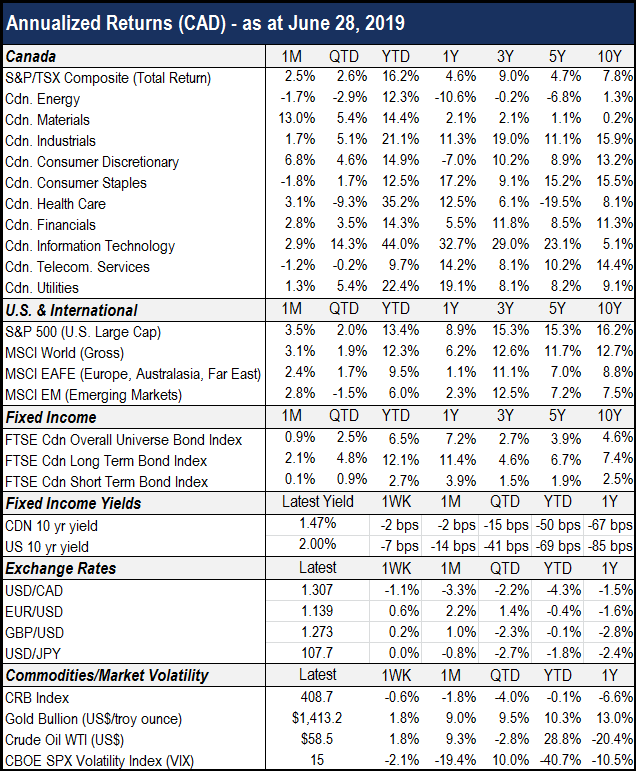