At Kerr Financial we employ an institutional multi-manager approach within our investment management methodology, adhering to a disciplined selection process in order to allow our clients access to a set of best-in-class specialty investment managers. One of our long-time managers, Calgary-based QV Investors, recently wrote an article about what it means to be a long-term investor.   It is a very timely piece that we would like to share with you. 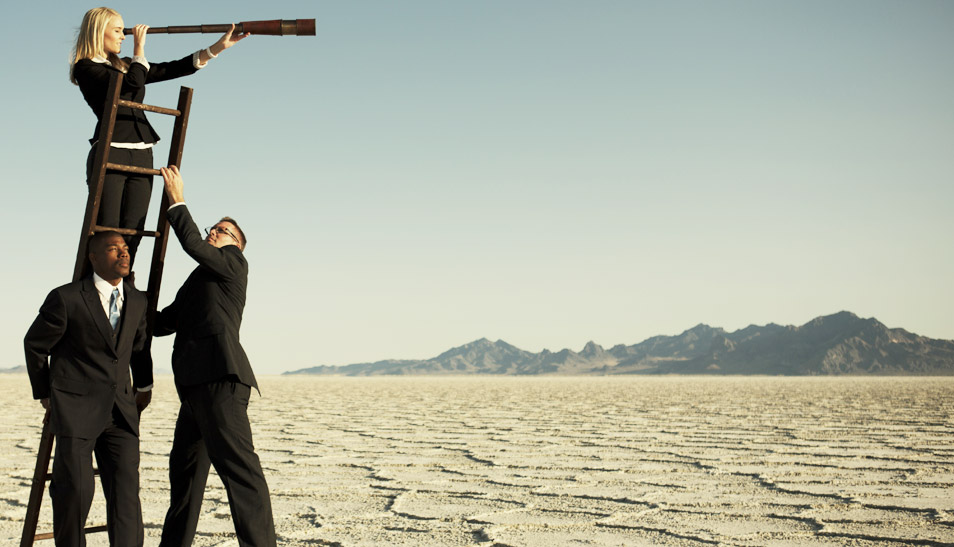 What it Means to be Long-Term

“Information is the oxygen of the modern age.” – Ronald Reagan
“We aren’t in an information age, we are in an entertainment age.” – Tony Robbins

No, this is not a debate that occurred between the former U.S. President and the famous self-help guru. Rather, these two separate statements highlight how on any given day we are subjected to a myriad of information; some of it news, and some of it ‘fake news.’ If it wasn’t already difficult to determine what is and isn’t important, we also need to distinguish between what is and isn’t real. Information overload can certainly cloud our judgement by creating uncertainty.

Business and political headlines have been dominated by the new President’s protectionist stance, including such topics as border taxes and re-negotiating the North American Free Trade Agreement (NAFTA). The potential outcomes could be meaningful to the extent that industries are disrupted, jobs are lost, and relationships are strained between the U.S. and its largest trading partners. While economic theory suggests the result of protectionism may not be in the best interests of national and international communities, in reality, we simply don’t know what will happen.

When it comes to investing, there is a constant bombardment of information about companies. The investment noise is amplified more as we progress through quarterly corporate earnings reports. It may lead some investors toward the short-term desire to trade in and out of positions. We cannot discredit those able to do this consistently with success. But for the most part, it is just too difficult to know what markets will do in the short-term. At QV, we feel a better approach to successful investing is through alignment with strong management teams that can execute on a clear strategy to create long-term value. It requires patience, but is beneficial to both investors and corporations.

A recent study by the management consulting group McKinsey & Company suggests that “all public-company CEOs, CFOs, and corporate boards should be doing what they can to attract and retain a critical mass of intrinsic [i.e. long-term] investors in order to blunt the effects of short-termism.” In other words, long-term investors make ideal partners for companies because we favour decisions leading to value creation over time, rather than avoiding short-term earnings deficits. Even the best companies will encounter bumps in the road. As long as the franchise is not impaired, long-term investors will use short-term volatility to buy more of a quality business.

CGI Group, a global technology consulting firm, has been a holding in the QV Canadian Equity Strategy for over seven years (compared to the strategy’s average holding period of five years). Over this time, the company’s cash flows have doubled, it made two sizeable acquisitions, and its equity value has grown more than five-fold. But CGI also had to endure a lot of bad press, such as its involvement in the botched rollout of the Obamacare website, scrutiny of its accounting practices, and being a large short sale target of a famed hedge fund manager. Long-term investors needed to recognize CGI’s strong history of deploying capital, its ability to deliver free cash flow, and its highly credible executives. QV continues to be shareholders in CGI, showing our confidence in a management team whose acquisition strategy is the same today, under a new CEO, as it was nearly seven years ago: “Right acquisition…Right price…Right time.”

Being a long-term investor does not mean ‘buy, hold, and forget.’ We consistently monitor and analyze companies to ensure our management teams remain on a path towards sustainable growth. Furthermore, we meet regularly with companies, giving us the opportunity to encourage optimal choices to achieve long-term goals. Even with critical assessment we cannot proclaim to know what the market or a stock price will do over the next 6, 12, or 24 months. However, with a process that helps to identify the next CGI Group, and the ability to look beyond headlines and Twitter feeds, we can maintain our goal of seeing value created over time.

NEWS FOR THE FIRST HALF OF JANUARY 2017 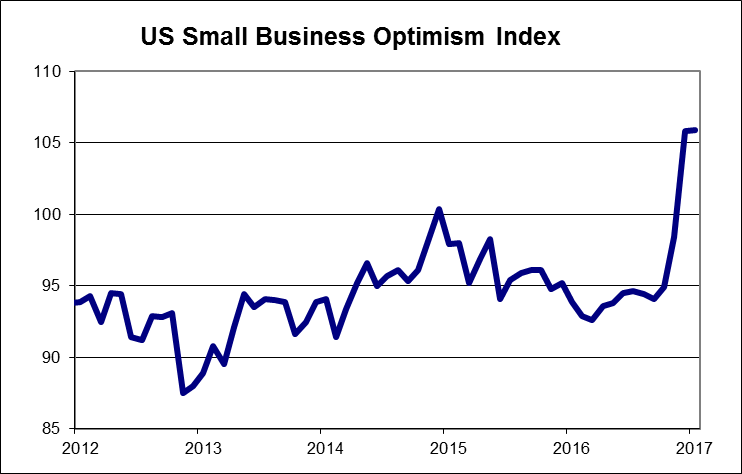 The NFIB Small Business Confidence Index for January rose by 0.1 points to 105.9.  It was the fourth consecutive monthly gain, as the U.S. post-election surge in confidence remains intact. 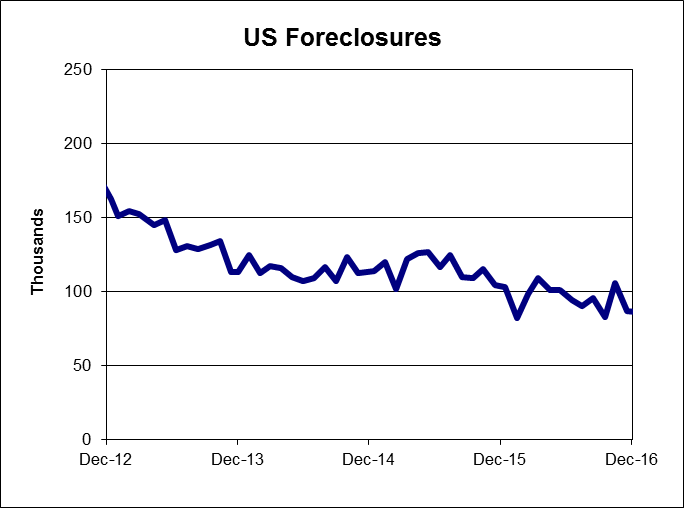 The latest monthly Realty Trac foreclosure report was not yet available.  The 2016 year-end report was released, showing foreclosure filings-default notices, scheduled auctions and bank repossessions-on 933,045 U.S. properties, down 14% from 2015, to the lowest level since 2006. 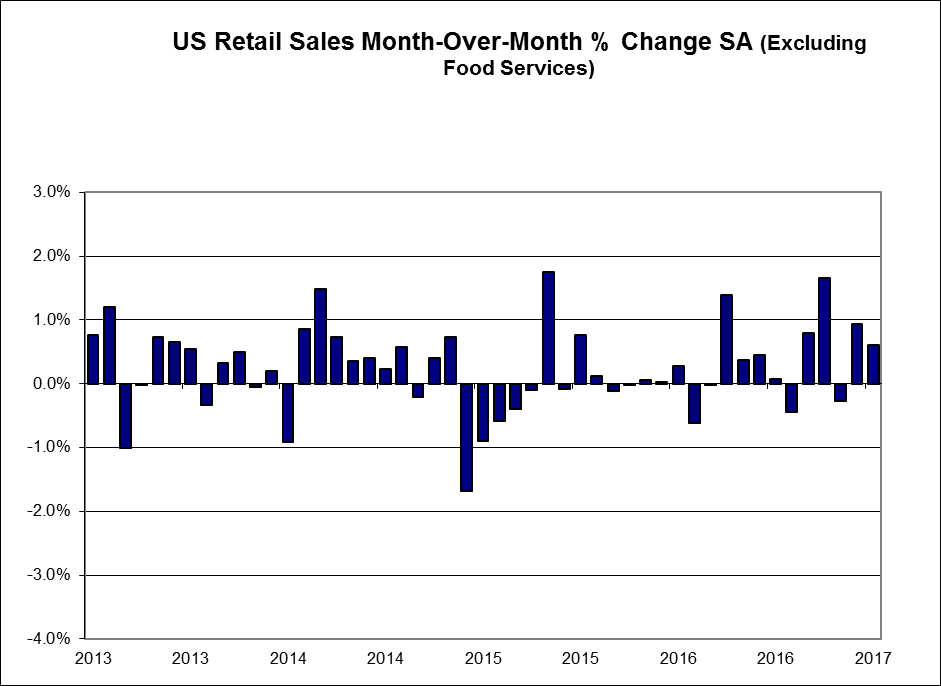 US retail sales rose by 0.4% in January, beating expectations for a 0.1% rise.  The December gain was revised upward from 0.6% to 1.0%.  The largest gains were seen in sporting goods, electronics, and food services. 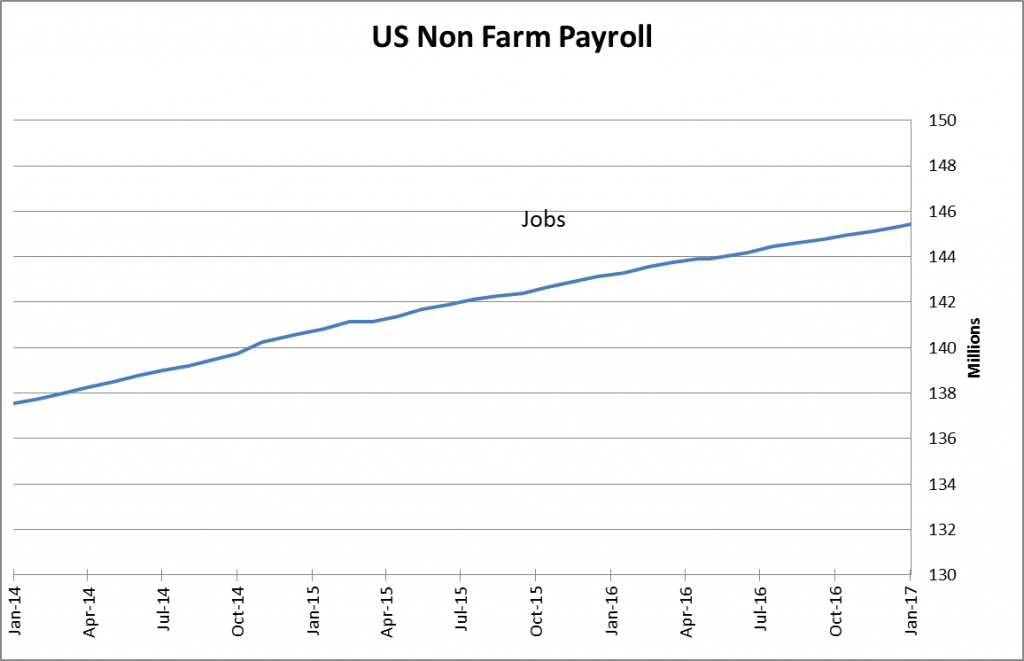 The ISM non-manufacturing index for January declined by 0.1 to 56.5. The decline in the new orders and business activity sub-indices was offset by an increase in the employment sub-index.  The US trade deficit for December narrowed to US$44.3 billion from US$45.7 billion in November.  Exports rose by 2.7%, while imports rose by 1.5%.

Canadian employment grew by 48,300 jobs in January, with the unemployment rate dipping by 0.1% to 6.8%.  Approximately two-thirds of the gains were in part-time employment.  Canada’s trade surplus for December narrowed to C$923 million from an upwardly revised C$1 billion surplus in November.  Exports rose by 0.8%, while imports rose by 1.0%.  It was the second consecutive monthly surplus.  Canadian manufacturing sales surged in December, rising by 2.3%, beating expectations for a 0.3% gain.  The November number was also revised upward.  Canadian housing starts inched up in January to a seasonally adjusted annual rate of 207,000 compared to 206,000 in December. The Teranet/National Bank home price index rose by 0.5% in January.  Home prices in the markets surveyed were 13.0% higher compared to the same time a year ago, with Toronto leading the way with a 21% year-over-year increase.