A rising loonie and robust labour market have propelled Canadian consumer confidence to a three-year high. Earlier this month the Bloomberg Nanos Canadian Confidence Index reached a level last seen July 2014. Its polling results also revealed that Canadians are feeling better about personal finances, with 20.2% stating their balance sheets are stronger than they were a year ago. Furthermore, the Conference Board of Canada recently raised its 2017 growth forecast for the Canadian economy to 2.6%, which the IMF corroborated by raising its own 2017 forecast for Canada. Such optimism for the outlook of our economy indicates Canadians may be shrugging off the impact of greater borrowing costs due to last month’s BoC interest rate hike, concentrating instead on the added purchasing power that accompanies a higher dollar as well as a strengthening economy that added 387,600 jobs over the past year – the largest 12-month gain since 2007. This augurs well for the continued consumption growth necessary in order to buoy our country’s expansion.

Hwever, as with any currency that is flying in territory not seen in years, there are those who benefit and those who feel the pinch. The following is a sampling of who will win and who will lose in this latest economic landscape.

The obvious winners are Canadians vacationing south of the border – a loftier loonie puts travel plans on sale when denominated in the greenback, as well as several other foreign currencies. For instance, a cruise for two departing from Fort Lauderdale, Florida priced at $2,000 USD would have cost $2,740 CAD when the loonie was trading at 73 cents USD. With the loonie at 80 cents, this same cruise costs $2,500.

Similar to consumers, Canadian businesses paying for goods and services in USD are now enjoying a bargain. For example, Canadian professional sports teams typically pay player salaries in USD. A stronger loonie means revenues earned in CAD stretch out further with respect to payroll. So when it comes to paying Carey Price his $7 million salary (USD), $840,000 CAD is saved compared to when the loonie was trading at 73 cents USD.

Now for some of the losers. First of all, anyone who is competing not only with American producers, but the rest of the world, will be disadvantaged. While a lofty loonie is beneficial for Canadians buying greenbacks, it also renders Canadian exports less competitive to foreign customers. Similarly, Canadian tourism becomes more expensive for foreign travelers.

Another stick in the spoke involves international investment. Canadians with foreign investments are experiencing diminished returns – even if their portfolios are appreciating in value. Left unhedged, investments with international exposure will suffer as a result of the loonie’s strength. And this matter could take on added significance considering Canadian investment in U.S. real estate recently reached a record high. Foreign investment in U.S. real estate surged 49% for the 12-month period ending March 31, 2017, with Canada’s share amounting to $19 billion USD – more than double the $8.9 billion USD spent the year prior.  It is imperative to note, however, that international exposure is still a vital component when constructing a diversified, risk-managed portfolio.

Finally, whether you are on the winning or losing side of our lofty loonie, Canada is in the midst of one of its strongest growth periods since the 2008-2009 recession. Whatever happens over the next two quarters, 2017 will go down as a strong year for the Canadian economy.

NEWS FOR THE SECOND HALF OF JULY 2017 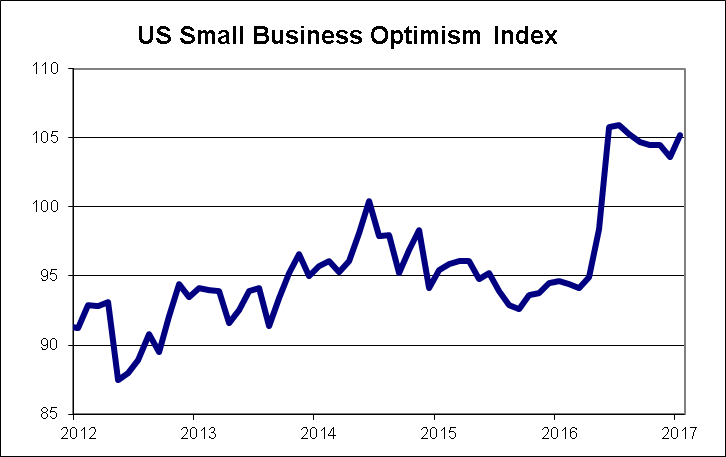 Small business optimism rebounded in July, moving up by 1.6 points to 105.2.  The higher reading was led by indicators for economic improvement, higher sales, and employment growth. 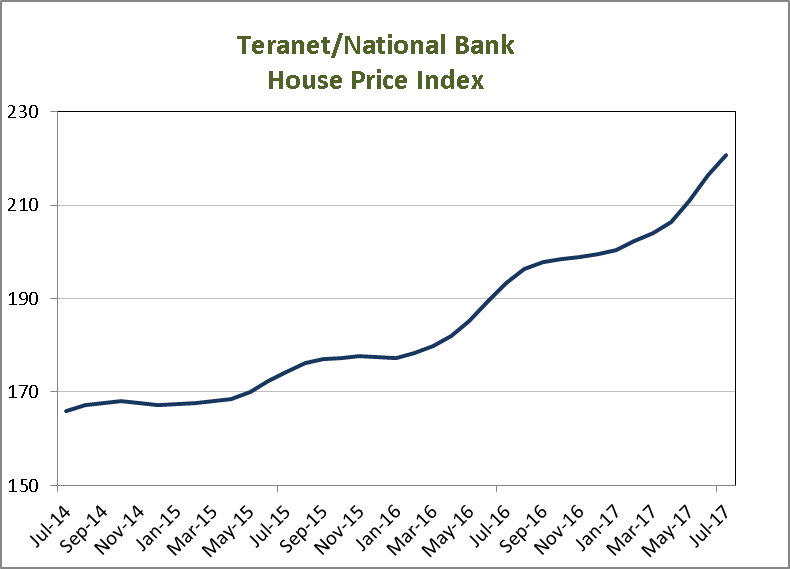 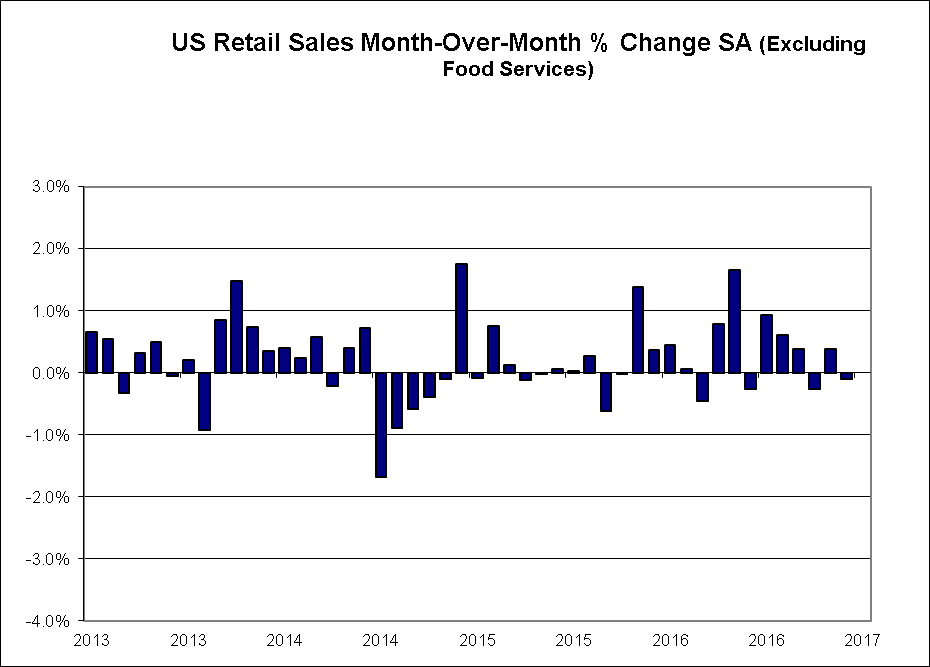 U.S. retail sales for July handily beat expectations, rising by 0.6%, compared to a forecasted increase of 0.3%.  The June number was revised from a 0.2% decline to a 0.3% increase. 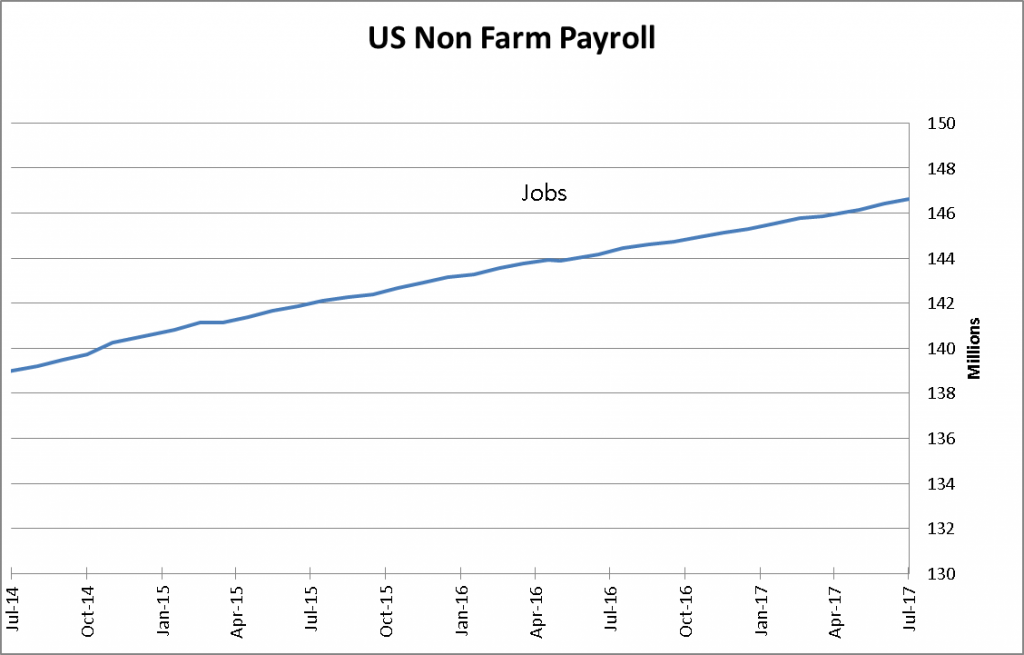 The ISM non-manufacturing index dropped in July by 3.5 to 53.9.  Most sub-components were down, with new orders, business activity and employment recording the biggest declines.  The US trade deficit for June narrowed by US$2.8 billion to US$43.6 billion, as exports rose by 1.2% and imports declined by 0.2%.  Consumer prices in the US rose by 0.1% in July, with the annual inflation rate holding steady at 1.7%.

The Canadian economy added 10,900 jobs in July, with a third straight month of full-time job gains.  With a decrease in the labour force, the unemployment rate fell by 0.2% to 6.3%.  Canada’s trade deficit widened to C$3.6 billion in June, from C$1.4 billion in May.  Exports dropped by 4.3%, after three consecutive months of record gains, while imports rose by 0.3%.  Canadian housing starts rose by 4% in July to an annualized rate of 222,000.  Existing home sales have fallen three consecutive months, which will likely lead to a slowdown in construction activity in the second half of the year.