The month of December was another month of primarily positive news for both global economic and financial markets globally, with little to detract from the favourable conditions other than geopolitical risks and the expectation that eventually, all good things must come to an end.

On the economic front, Canadian data released during the month remained consistent with robust economic growth and a tightening labour market, although the October GDP number was flat, reinforcing the view that the economy cooled somewhat in the second half of 2017.  November inflation numbers came in much stronger than expected, with the inflation rate increasing to 2.1%, the highest level since January 2017.  The strong inflation numbers, as well as the robust October retail sales data pushed the Canadian dollar higher in late December on expectations that the Bank of Canada may raise rates again earlier despite the uncertainties surrounding consumer debt and the NAFTA re-negotiations.

In the U.S, there remain few signs of slowing economic growth, therefore the timing of the U.S. tax package passed by both houses of Congress in late December would appear less than ideal.  Analysts expect that the tax package will have a modest impact on economic growth (and not particularly necessary given the current environment) but will add to inflationary pressures and is likely to worsen an already poor fiscal outlook.  Consequently, it is expected that the Federal Reserve may need to respond with more aggressive monetary tightening than previously anticipated.

After two months of gains in the Canadian bond market driven by the Bank of Canada’s decision in both October and early December to hold its overnight target rate steady, December experienced negative returns as strong inflation and consumer spending numbers released just before the holidays resulted in the bond market selling off at the short and intermediate end of the yield curve.  The FTSE Canada Universe Bond Index fell 0.4% in the month, while the FTSE Canada Long Term Bond Index was flat.  Credit spreads tightened modestly in December, with most of the tightening occurring in provincial and municipal bonds.  The U.S. bond market, on the other hand, posted positive returns (in USD) as the market had already priced in the December interest rate increase.  As global economic data continues to come in on the stronger side, it is anticipated that interest rates will continue to move higher and that central banks beyond the Federal Reserve will also begin to normalize rates.

It was another positive month for North American equity markets, with seemingly little capable of stopping the upward trajectory.  The TSX was up 1.2% in December to close out 2017 with a 9.1% return.  The Canadian equity market’s gain was driven by strong returns in a number of individual names in the materials, industrials and health care (includes marijuana stocks) sectors.  The energy sector also contributed in December, supported by the sharp increase in the price of oil.  The S&P 500 remained on its upward trend in December in USD, but posted a negative return of 1.7% (in CAD) due to the 2.7% appreciation in the CAD/USD.  Both the telecom and energy sectors were notable contributors to the continued strength in the U.S. equity market.

Overseas, both developed and emerging equity markets were also broadly positive (in local currency terms) in December, although it was more of a mixed bag in Europe as the euro rally (vs. the USD) in late December, as well as tech sector losses, negatively impacted a number of export-heavy equity markets.  In CAD terms, the broad global market indices posted negative returns in December due to the CAD appreciation, with the MSCI All Country World down 1.1% and MSCI EAFE down 1.2%.

It was a good month for Canadian snowbirds, but not so good for Canadian investors and exporters as the Canadian dollar was up 2.7% against the USD, ending the month at 1.253 USD/CAD.  A large part of the appreciation happened during the last week of December, supported by the strong year-end gains in both oil and natural gas prices. The primary story in currency markets in December and for the year has been the decline in the USD against most major currencies.  The sharp rise in many commodities during the past year has been re-igniting the global reflation trade, thus diminishing the appeal of the USD relative to currencies of faster growing economies. 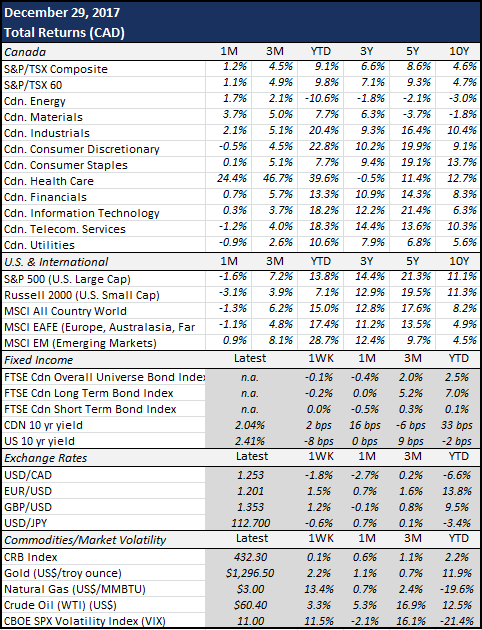