U.S. equity markets appear to have taken a respite from their post-election rally; becoming range-bound over the last month.  As the Trump Trade loses steam, the improving global economy is becoming the new narrative. With U.S. economic momentum fully priced in stock prices, European and Japanese growth rates have improved with the prospect for further increases in global trade. This past month also saw volatility in the price of oil – providing a reminder of the not-too-recent corporate earnings recession and malaise in credit markets.  U.S. stock prices have had quite the rally over the past year, especially after the election. With the economic optimism now overdone, it appears investors are starting to question whether Trump can walk his talk. The debacle in congress and failure to pass health care reform is not a good harbinger.  Fortunately, markets are taking this in stride and focused on other markets with better value propositions – European markets experiencing their largest fund inflows in over a year. 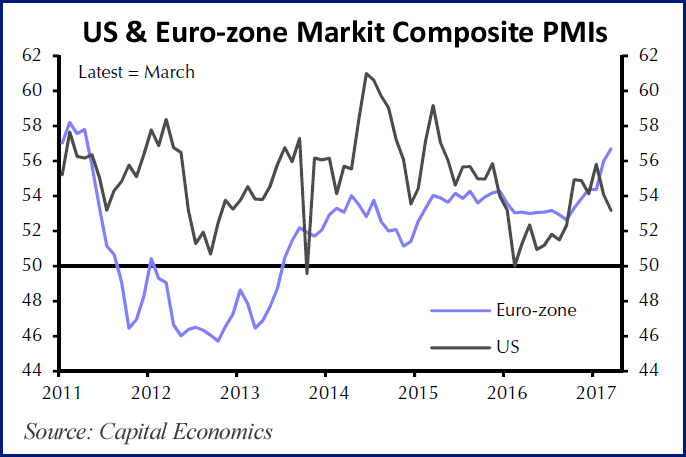 The month’s first half experienced equity market divergence.  Reversing the post-election trend, small-cap stocks under-performed large-caps for the fourth consecutive week – roughly 3.5% below the all-time peak of March 1, 2017. The big headline was found in reports of rising oil inventories which pushed the price domestic crude below $50/bbl. for the first time since December.  Energy shares were negatively affected and dragged the overall market lower. Despite the recently successful OPEC production cuts and subsequent rebound in oil prices, improvements in drilling and exploration should keep both supplies elevated and a lid on energy prices.  Another headline garnering investors’ attention was the Federal Reserve raising its short-term interest rate due to increasing confidence in the U.S. economy. The widely expected hike (the second in three months and the third in eight years) saw the federal funds target raised by a quarter points to a range of 0.75% to 1.00%. The Fed signaled their go-slow approach to further interest rate hikes – the process of “normalizing” rates likely to be very gradual due to the sluggish nature of the U.S. recovery.  Across the pond, the populist bandwagon hit a pothole as voters in the Netherlands rejected Geert Wilders’ Freedom Party in their national election.  The outcome, hailed as a rebuff of Eurozone populism, is considered to foreshadow the outcome next month’s French presidential election, which will be hotly contested by the National Front’s Marine Le Pen.  For the first half of March, Canadian and U.S. equites hovered around scratch while European stocks rallied 3%.

During the month’s second half, the sheen finally came off the Trump rally as the S&P 500, for the first time in 109 trading days, closed down by over 1%.  The decline came amid the defeat of Trump’s keynote campaign promise to replace Obamacare.  The political realities of Washington demonstrated the Trump administration’s difficulty in successfully negotiating with a Republican Congress – possibly a failed test to champion future Republican pro-growth legislative initiatives.  Oil and gas stocks helped to buoy global markets after data showed that stores of U.S. crude oil were rising less quickly than expected. Major European indexes vacillated as investors seemingly awaited more guidance on key events like the upcoming French elections and Brexit news, the latter of which was finally initiated.  Concurrently, the passing of the government’s “Great Repeal Bill,” transferring EU laws to British statute books – provided some clarity for investors.  The FTSE 100 Index experienced some initial volatility before rising modestly and the Sterling remained stable.  A terrorist attack outside of the British Parliament building also initially hurt sentiment. However, European equities were helped by stronger economic data reports. During the first quarter, French and German PMI’s rose at their quickest pace in more than five years.  As the Eurozone economy continues to strengthen, expectations of the ECB to moderate its stimulus measures are on the rise. For the last two trading weeks of the month, Canadian equities were up 1.5% and U.S. and European equities advanced by 0.8% and 0.2% respectively.

NEWS FOR THE SECOND HALF OF MARCH 2017 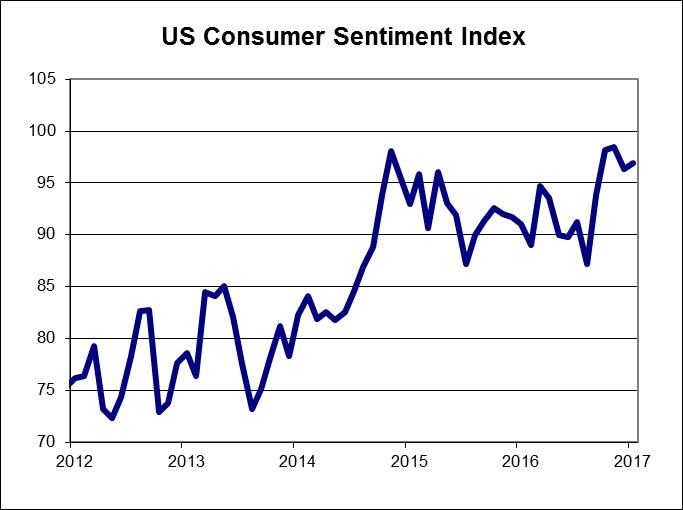 The Thomson Reuters/University of Michigan consumer sentiment index rose to 96.9 in March from 96.3 in February, with consumers optimistic about higher income and wealth, favourable job prospects and lower inflation expectations. 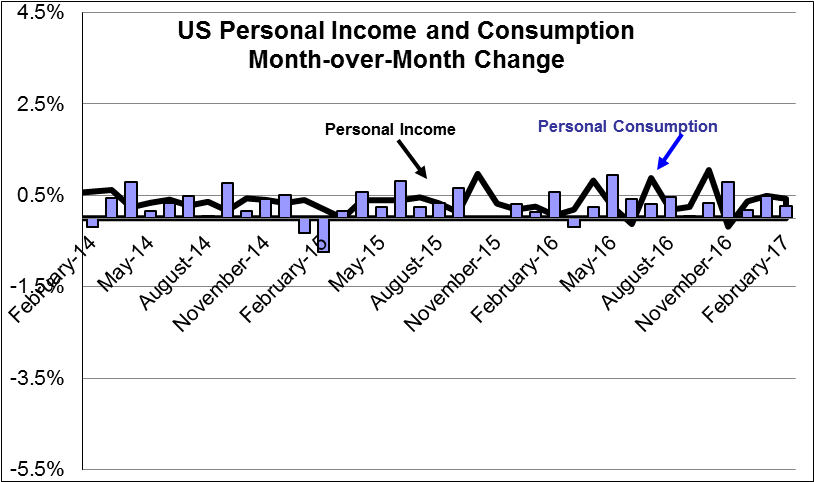 Personal income rose by 0.4% in February, after being revised upwards to a 0.5% increase in January, while personal spending was up by just 0.1%. 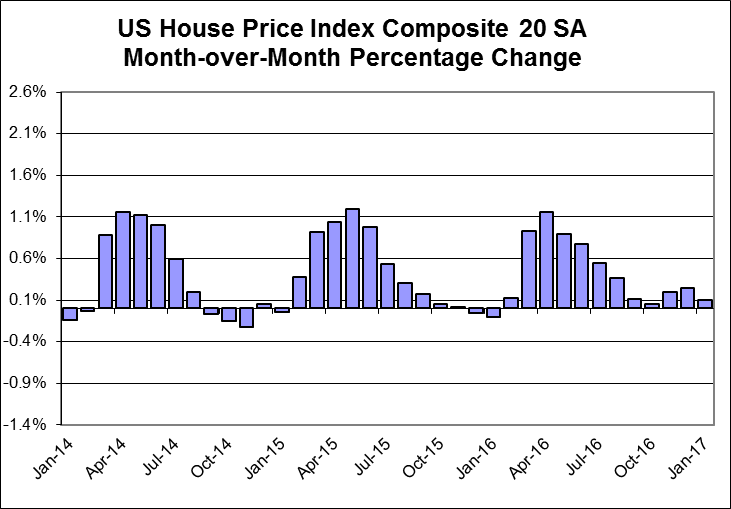 Home prices, as measured by the S&P Case Shiller home price index, rose by 0.9% in January and were up by 5.7%, year-over-year, compared to a 5.5% rise in December. 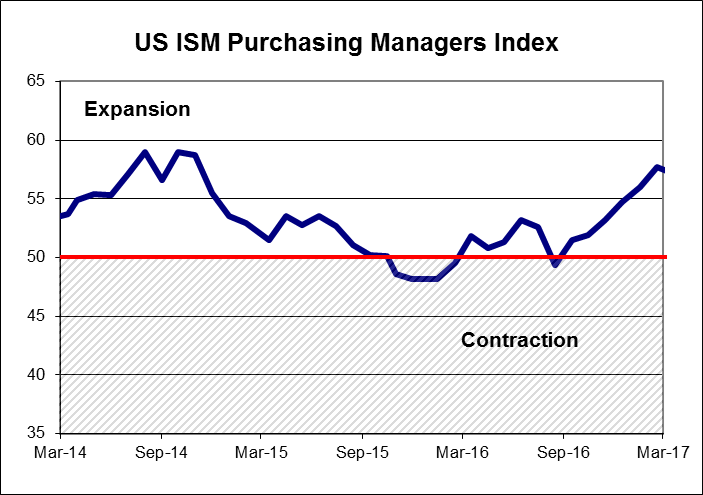 The ISM Manufacturing index for March fell from 57.7 to 57.2.  The increase in the employment sub-index was offset by declines in new orders and production.

US housing starts moved upward in February, rising by 37,000 units to 1.288 million units annualized.  The entire gain came in the single-family segment.   Building permits declined, coming in below expectations.  However, building permits for single-family homes increased.   Existing home sales in the US declined by 3.7% in February, from the 10-year high reached in January.   US new home sales rose to a seven-month high in February, rising to 592,000 units, on an annualized basis.  Orders for US durable goods for February increased by 1.7%, helped by a surge in commercial aircraft orders.  Orders for non-defence capital goods, excluding aircraft, a close proxy for business investment, fell by 0.1%, which was below expectations.   US consumer prices rose by 0.1% in February, with the annual inflation rate rising from 2.5% to 2.7%.  The final estimate of US fourth quarter GDP came in at 2.1%, annualized, up from 1.9% reported last month.  This compares to a 3.5% growth rate for the third quarter. In the latest revision, higher consumer spending was partially offset by the largest gain in imports in two years.

Canadian manufacturing sales rose by a strong 0.6% in January beating consensus estimates for a 0.3% decline. Canadian retail sales for January were also strong, increasing by 2.2%, more than making up for December’s decline.  It was the largest monthly increase since March 2010.  The Canadian inflation rate fell to 2.0% in February from 2.1% in January.  Canadian GDP rose by 0.6% in January, helped by strength in manufacturing.