After a summer of relative calm, stable prices and light trading, global equity markets started off September with a rapid decline but eventually recovered sufficiently with a modest gain for the month. Developed world monetary policy appears at a crossroads and has recently reemerged as a catalyst for negative sentiment as central bankers face the limitations of their loose money policies.  As we turn a season, into the final quarter of the year, one can conclude that the U.S., while growing at a slower pace than expected, has at least avoided a recession.  Predictably, the Fed hasn’t raised rates since last December, but a hike is nigh provided GDP growth, full employment, and a 2% inflation rate continue to trend.  However, as proven in recent history, the Fed remains beholden to the global financial system and wants to ensure there are no unnecessary shocks to financial markets. 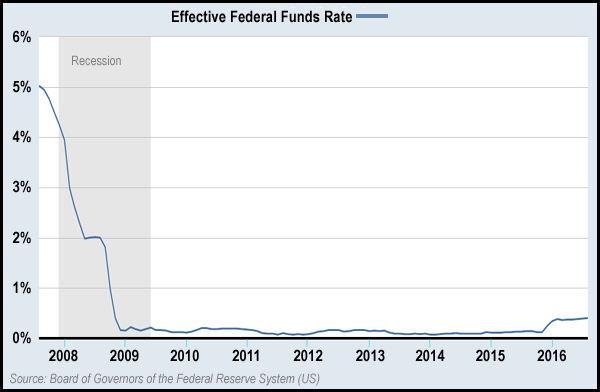 Central bank actions around the world led the headlines this month.  In Europe, the ECB chose not to expand its bond-buying program amidst its growth and political malaise.  In the meanwhile, dissenting opinions within the U.S. FED pointed to at least one rate hike before the end of the year – most notably when Boston Fed President Eric Rosengren, stated that there was a “valid case for higher rates.”  Causing some bemusement, was Fed member Lael Brainard, who countered Rosengren’s hawkish tone by stating the FED is in no rush to raise interest rates. By mid-month, the market appeared to price in a December rate hike in the federal funds futures contracts – which would only be the second rate hike since the global financial crisis.  In Japan, investors and central bankers alike continued to be nonplused at the continued appreciation of the Yen – which is up 16% for the year against the U.S. dollar.  Also, Japanese Q2-GDP growth remained sluggish at 0.7% suggesting the yen’s appreciation against the dollar is taking its toll.  In the U.S., investors are becoming wary of equity valuations now at their upper quartile thanks to the easy money policies of central banks and inflows due to uncertainties abroad.  With increasing leverage and fund flows into higher yielding stocks, a reversal of central bank policies would also contribute to short-term softness of equity market returns.  Geopolitical concerns are also tested investor mettle as the North Koreans announced yet another successful nuclear test.  For the first-half of the month, Canadian and U.S. equities were both down 1.5% and 0.7% respectively.  European markets were also down 2% along with Japanese equities at 0.8% due to lack of central bank direction.

During the second half of the month, markets recovered sufficiently – primarily driven by the Fed’s decision not to raise interest rates and the dovish tone of Fed Chair Janet Yellen.  Investor worries are now on hold as the Fed’s next announcement will be close to the presidential election date, and as such, a rate change is very unlikely as it would be deemed “politically motivated.”  Financial stocks declined on the news since their lending margins still remain modest in a low yield environment. Utilities, REITs and other high yielding stocks gained due to their relative attractiveness to bond yields. The U.S. dollar declined, helping materials and energy stocks as these commodities are priced in dollars.  Oil prices recovered from an 8% drop earlier in the month on news of inventory drawdowns and OPEC’s surprise agreement to collectively cut oil production.  European stocks also rallied on the Fed’s decision as well as from the Bank of Japan’s announcement that it would adjust its asset buying to ensure an upward sloping yield curve.  Japanese equities were also up for the same reason; however, the market remains skeptical of the BoJ’s increase to its 2% inflation target – a level it is having difficulty reaching already.  For the second-half of the month and in moderate trading volume, North American markets were positive with a 0.8% increase to the S&P 500 and a 2% surge to the TSX.  European markets were up 2.7% and Japanese equities rebounded 2.5%.

At the end of September, most major markets were modestly positive led by Japan at 1.7%.  Canada’s TSX posted a 1.2% return – benefiting again from a strong showing in cyclical stocks.  The S&P 500 was barely even for the month while European indices gained 0.8%.  On our radar is the uncertainty that arises from the share price collapse of Deutsche Bank (down 57% to a 3 year low) as it faces a $14B penalty for its role in the 2008 sub-prime crisis.  Closer to home, Trump’s rising poll ratings are of concern due to his muddled platform and acrimony towards trade and globalization; however, there may be opportunities from his views on infrastructure spending and corporate tax breaks.

NEWS FOR THE SECOND HALF OF SEPTEMBER 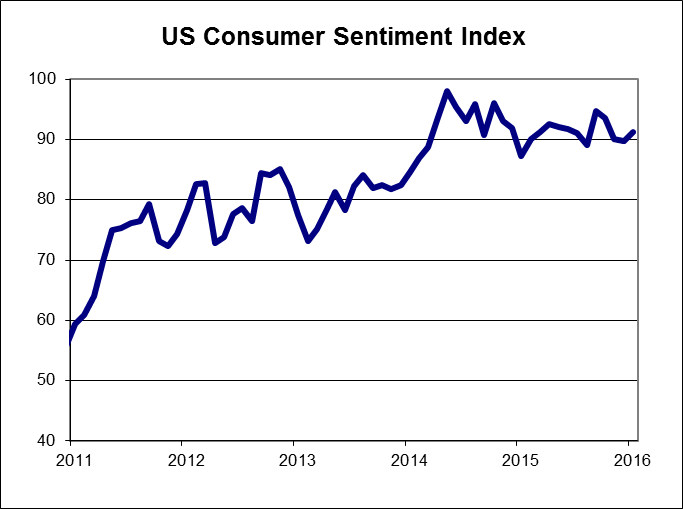 The Thomson Reuters/University of Michigan consumer sentiment index rose to 91.2 in September from 89.8 in August, as consumers were more optimistic about the outlook for the economy and for their personal finances. 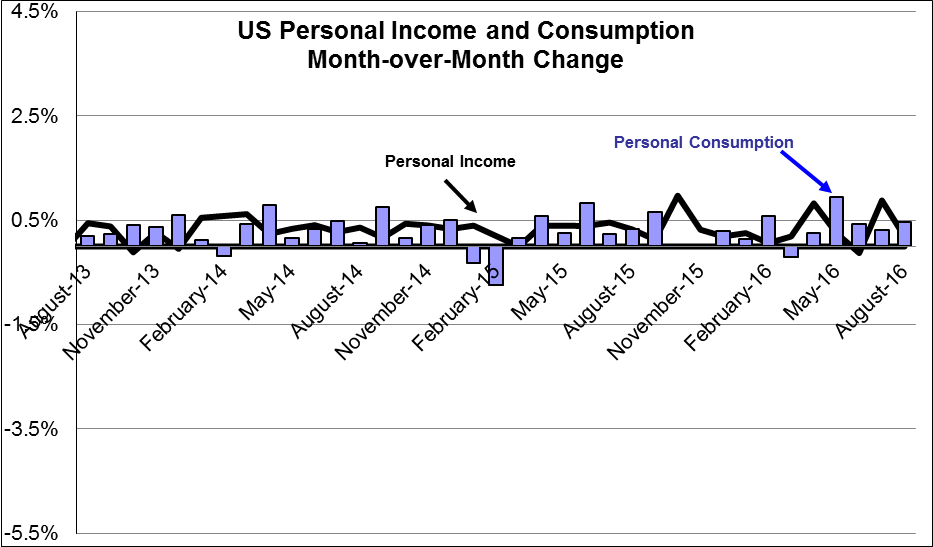 Personal income rose by 0.2% in August, as expected.   However, personal spending was flat, the weakest reading in five months. 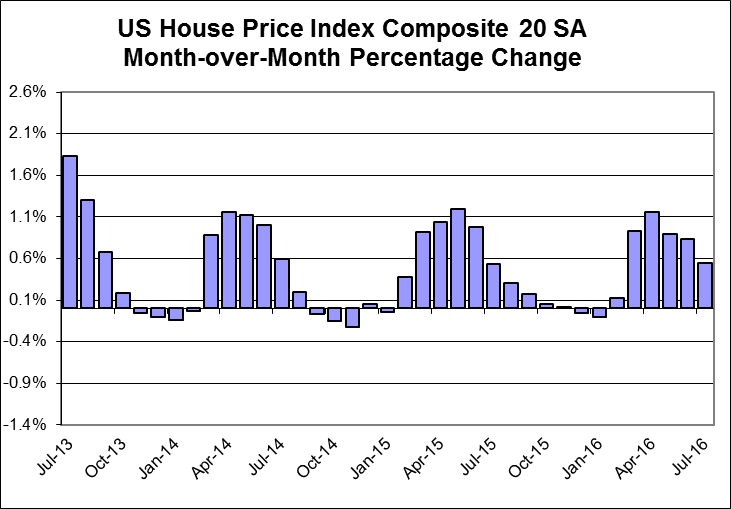 Home prices were flat in July with the S&P/Case-Shiller home price index unchanged for the month and the year-over-year increase at 5.0%, down from 5.1% the previous month. 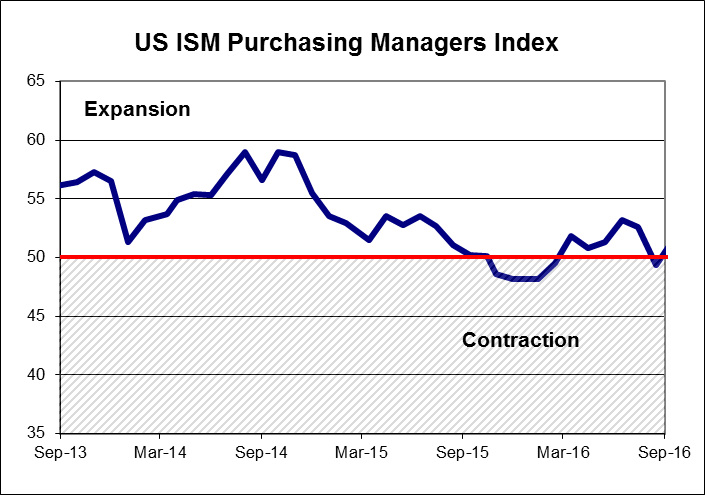 The ISM Manufacturing index rebounded in September after contracting in August, rising from 49.4 to 51.5.  Increased production and new orders led to the increase, although employment fell.

US housing starts for August declined to 1.142 million units annualized, falling below forecasts for a more modest decline.  Building permits declined slightly, also falling below expectations.  Existing home sales in the US fell by 0.9% in August to 5.33 million units.   August sales of new homes in the US declined by 7.6% to 609,000, on an annualized basis. This still represented a 20% increase from the level of a year ago. Orders for durable goods in the US for August were flat.  Orders for non-defence capital goods, excluding aircraft, a close proxy for business investment, rose by 0.6%, the third consecutive monthly increase.  US consumer prices rose in August, led by housing and healthcare costs, causing the annual inflation rate to rise from 0.8% to 1.1%. The final estimate of US second quarter GDP came in higher than last month’s estimate, rising to 1.4% from 1.1%.  Higher business investment and exports accounted for the increase.

The Canadian economy experienced strong growth for the second straight month in July as GDP rose by 0.6%, following a gain of 0.5% in June.  Continued recovery in oil production and petroleum product manufacturing helped boost growth following the devastation of the wild fires in Alberta in May and early June.  Canadian retail sales for July declined by 0.1%.  The Canadian inflation rate fell to 1.1% in August from 1.3% in July.