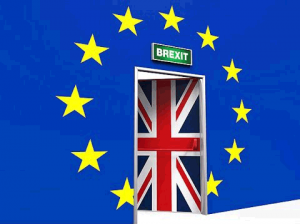 UK voters have chosen to leave the European Union, with the “leave” campaign securing 52% of the votes in yesterday’s “Brexit” referendum.  The result was largely unexpected by both market analysts and British bookmakers, who had the “leave” outcome at a 25% probability just days prior to the vote.

The UK’s vote to exit the EU has triggered negative reactions in global financial markets as well as uncertainty for the near term, but according to Capital Economics, our third-party economic research firm headquartered in London, England, implications are likely to prove much less dramatic than reports are suggesting. Furthermore, some offsetting benefits for the global economy in the form of central bank easing may be imminent.  Now, however, immediate focus is on the market turmoil triggered by the surprising outcome. At the time of writing, the British pound has declined against the U.S. dollar and Japanese yen, falling 8.3% and 12.5% respectively.  The euro reacted to greater expectations of further European Central Bank easing by falling 2% against the US dollar.  Equity markets have also reacted negatively, with US, European and Japanese stock indices down 3%, 7.5%, and 8% respectively.  Furthermore, fixed income yields have responded similarly, with US 10-year treasury yields down 17 bps on the day, trading at a yield of 1.57%.

Business confidence and investor sentiment will presumably decline in the near term, particularly in Europe, and risky assets could continue to suffer initially. Industrial commodities may weaken, while gold will probably benefit. However, knock-on effects to the economy from falling security prices need not be huge. After all, equity markets in advanced economies fell over 20% in the first six weeks of the year but this did not trigger a recession, and these moves were soon reversed. Capital Economics has provisionally shaved their 2016 UK GDP forecast from just above 2% to 1.5%, implying slower growth in the year’s second half but no full-blown recession.

The vote’s impact makes it likely that policymakers in the UK, Europe and the U.S. will continue with further accommodative monetary policy. The Bank of England has already made 250 billion pounds of liquidity available to the financial system and an interest rate cut and expansion of the Bank’s quantitative easing program are both possible, as well as coordinated action with other central banks to maintain liquidity and smooth currency movements. It is important to also note that the UK will remain in the EU for at least two years and possibly longer. This will allow time to clear up uncertainties, not least over the UK’s future trading relationship with the remainder of the EU and the rest of the world. Meanwhile, the sterling’s decline should also help their export sector.

Once the dust settles, the more important long-run consequences will likely be political rather than economic or financial. The episode could have longer-lasting effects on European markets if anti-EU parties elsewhere feel emboldened enough to demand their own referendums, raising fundamental questions over the future stability of the EU and Eurozone. Opinion polls indicate demand for a referendum on EU membership in France, Italy and the Netherlands; such demand may now be harder to resist. Moreover, even if the rest of the

EU sticks together, its members may struggle to agree on further reforms, including those which are necessary to sustain the monetary union.

Finally, the referendum result may exacerbate concerns that support for populist movements elsewhere will grow. Support for Brexit in the UK and for Donald Trump in the US taps into the same concerns about the impact of globalisation and rising inequality. However, parallels between the two movements are not as close as many assume, because Brexit campaigners have argued for more, not less, free trade. For now, fears of a wholesale reversal of globalization appear overstated.

From a portfolio point of view, until more clarity emerges on the actual economic consequences of Brexit, it is likely that equity markets will continue to be volatile.  Going into this quarter our managed funds already had elevated cash positions ranging from 4% to as high at 10%.   While the market volatility may present buying opportunities, at this juncture we will remain patient and refrain from making tactical changes. By constructing diversified multi-asset portfolios with an appropriate allocation to investment grade bonds, we have sought to mitigate risks from events such as the UK referendum. The strategic approach to investing compels us to maintain our disciplined strategy, not sell down devalued risk assets at a time of heightened market volatility.