Despite most of the post-Brexit losses being quickly recouped shortly after the vote, markets were understandably tentative with the second-quarter earnings reporting season now approaching.  A risk-off sentiment characterised the opening of the month with record low government bond yields, falling oil prices, and a continued flows to “safe havens,” such as gold, suggesting doubts about the previous week’s equity rebound. Recent news of U.K. real estate funds “gating” redemptions didn’t help improve investor disposition either. 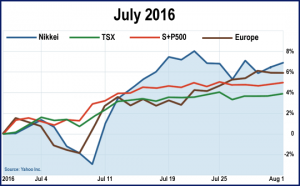 Investors eventually averted their gaze towards some upbeat U.S. economic data and political developments abroad.  In addition to the USA’s second quarter consumer spending surging to 4.2%, consumer confidence readings remained stable – consumer spending carrying Q2 GDP, which disappointed at 1.2% due to inventory draw-downs. Worries about a slowing U.S. labour market were assuaged with a reported 287K new jobs created in June.  Japanese equities, long stinging from the Yen’s safe-haven status (up 12% YTD vs. the dollar), rallied on expectations of further stimulus and news of Abe’s Liberal Democratic Party “super-majority” which should improve Abe’s political efficacy. The Bank of Canada, as expected, kept rates on hold and forecasted strengthening gross domestic product in the third quarter but lowered its projections for overall growth in 2016 and 2017 – implying the current rate environment will prevail. European markets remained under pressure, especially banking shares, amid expectations that interest rates will stay lower for longer. Deutsche Bank’s stock hit a record low, and Italian banking shares sold off as nonperforming loans mounted. The British Pound hit a 31-year low, while yields on 10-year government notes in the UK, Germany, and France also found record lows.  European markets perked up on the appointment of Conservative Party leader Theresa May as the UK’s newest Prime Minister – a decisive move towards greater clarity as the UK negotiates its exit from the EU.  For the first half of the month, Canadian and U.S. equities appreciated 3.2% and 2.8% respectively.  European markets were also up 1.1% along with Japanese equites at +5% – both recovering from sell-offs during the month’s initial trading days.

Adding to the momentum of the first half’s trading, second quarter corporate earnings trickled in, and while not positive, were better than expected.   Estimates point to overall earnings for the S&P 500 to have declined 3.7% in the second quarter – the longest stretch of quarterly declines since 2009; however, 30% of the S&P 500 companies have reported results, and earnings are beating expectations by 6% while revenues are ahead by 1.5%. Mixed corporate earnings generally supported a modest rise in the European indices – Germany’s DAX 30 recouping all of its losses since the Brexit vote. For the second-half of the month, North American markets added to their gains with an additional 0.5% rise – just enough to bring the S&P 500 to an all-time high.  European markets shook off their funk with a 3% surge and Japanese equites gained 0.8%.

Closing out July, most major indices experienced solid gains led by Japan at 6.7%.  Canada’s TSX experienced gains across the board (except Energy at -0.5%), finishing up 3.9%.  The S&P 500 also posted a 4% return while European indices rallied 4.4%.  One month has passed since the historic Brexit vote and investors have enjoyed a volatile but positive bounce to their equity positions.  While the issues and logistics of the UK’s departure from the EU are sure to make headlines, its contagious effects to global trade are still undetermined. At this juncture, global economic data has been helping investors focus on the positives.   The U.S. economy has been able to maintain its pace of mild acceleration in part due to strong jobs growth and solid levels of consumer spending.  That aside, the ongoing U.S. presidential race will either create additional risks or affirm the status quo.  In the near term, given the surprising “Brexit Bounce”, it is now more probable that a “Fed Flip” in the form of a rate hike could materialize – possibly rekindling another bout of volatility.

NEWS FOR THE SECOND HALF OF JULY 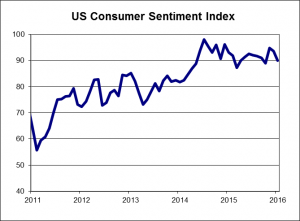 The Thomson Reuters/University of Michigan consumer sentiment index dropped to 90.0 in July from 93.5 in June.  Consumers were less optimistic about both current economic conditions and future expectations. 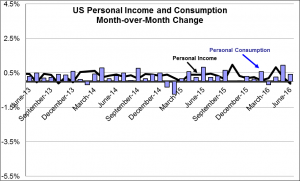 US personal income rose by 0.2% in June, while consumer spending rose by 0.4%.  Increases in spending have outpaced increases in income the past three months, resulting in the lowest savings rate since March 2015. 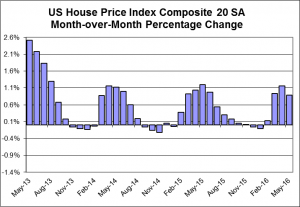 The S&P/Case-Shiller home price index for 20 US cities rose by 5.2%, year-over-year, in May, which was below expectations and lower than the 5.4% annual growth rate of the previous month. 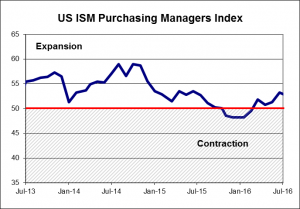 The ISM manufacturing index dropped to 52.6 in July from 53.2 for June, as production grew and the pace of new orders grew at a slower pace, while employment contracted.

US housing starts rose by 4.7% in June to 1.189 million units, beating expectations.  Building permits also rose, the third straight monthly increase.  US existing homes sales rose by 1.1% to 5.57 million annualized units in June.  US new home sales rose by 3.5% to 592,000 annualized units in June, with May’s number being revised upwards.  US durable goods orders decreased by 4.0% in June, as a result of a steep drop in transportation equipment.  Orders for non-defence capital goods, excluding aircraft, a closely watched indicator of business spending, increased by 0.2% after falling by 0.5% in May.  The first estimate of second quarter US GDP showed annualized growth of 1.2%, which was below expectations for a 2.5% increase and up modestly from the 0.8% increase for the first quarter.  Stronger consumer spending was offset by weakness in investment and inventories.

Canada’s GDP dropped by 0.6% in May, mainly due to the shutdown of oil sands facilities in Alberta caused by wildfires that occurred during the month.  Canadian retail sales rose by 0.2% in May with a slight downward revision to previous month’s number.  The annual inflation rate in Canada held steady at 1.5% in June.