Following a very strong start to the year, we would have expected equity markets to take a bit of a breather in February but instead, the climb continued despite the lack of resolution with respect to many of the global uncertainties including U.S.-China trade talks and Brexit.  The change in tone from central banks has certainly been a significant contributor to the “about face” in equity market sentiment, and while global economic growth continues to slow from its previous strong rates, there has been little indication of an impending recession.

On the economic front, the majority of data in both Canada and U.S. continues to point to slowing economic growth as the impact of higher interest rates continues to work its way through the economy, but an outright decline seems unlikely in the short term. Economic data has been more of a mixed bag in Canada given the significance of the energy sector to Canada’s economy and the weakness experienced in 2018, but 2019 has started on a more positive note.  Various risks continue to cloud the global outlook, namely the outcome of discussions between the U.S. and China, as well as whether China can sustain its strong economic growth path (note that China’s target growth rate was just reduced slightly to 6%-6.5% from 6.5%).  Tensions between Canada and China have also increased in recent months which could have a more pronounced negative impact on Canada’s economy than previously expected.

February was a quiet month with respect to central bank activity as neither the Bank of Canada nor U.S. Federal Reserve made interest rate announcements.  However the month was not without action in the bond markets.  Statements from various central bank officials remained on script with the more dovish tone telegraphed in January and the message that the path of future interest rate movements is data dependent – this message appears to have been taken as gospel by market participants as the bond market reacted to every material data release as though it was the deciding factor for the Fed’s next interest rate announcement. For the month, interest rates increased across the yield curve, but more so at the longer end. Credit spreads, however, tightened and more than offset the rise in government yields. Overall, the Canadian bond universe was up 0.2% in February, while the Canadian corporate bond market returned 0.3%.

Equity markets showed little sign of reversing their upward trend through most of February as markets were provided with enough positive data releases and tweets from President Trump to maintain the momentum. Only the broad emerging markets returned more muted gains due to a number of countries in Latin America, the Middle East and Europe posting negative returns. Fourth-quarter corporate earnings released in February also remained supportive of equity markets with 70% of companies in the S&P 500 beating expectations. Earnings expectations for 2019 have come down significantly compared to 2018 but remain in positive territory and could surprise on the upside if the various risk factors noted above are resolved favourably and the Fed remains dovish with respect to interest rate increases. For the month, the Canadian, U.S., international (ex-North America) and emerging stock markets returned 3.2%, 3.5%, 2.8% and 0.5% all in CAD, respectively.

As we look forward, many of the risks clouding the outlook over the past year have not disappeared but the global economy and in turn, corporate earnings, continue to demonstrate resilience and an ability to navigate the uncertainties. A resolution to the trade talks between the U.S. and China, as well as to Brexit would certainly provide support to global economic growth and equity markets; however, it would also likely put the Fed back on the path of increasing interest rates. As we have previously stated, sharp back-and-forth market action is likely to persist until investors start seeing clarity on these important subjects. 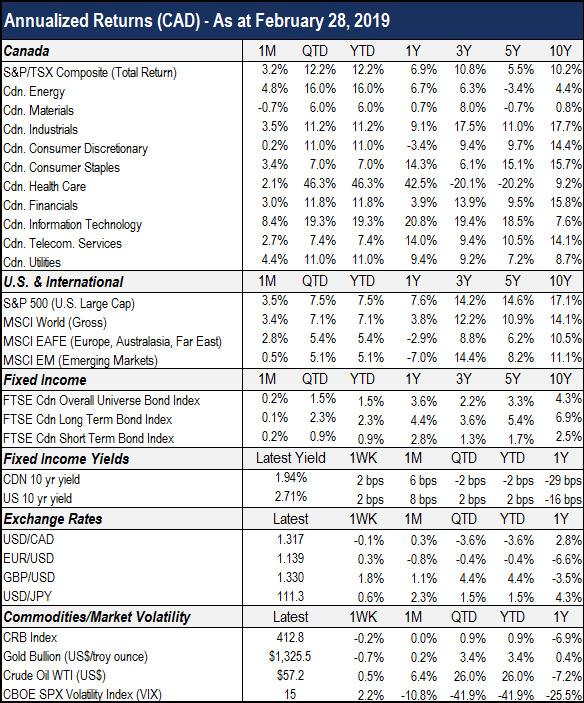